Shelby’s Bistro is a very good place to eat while visiting Tubac. It’s hidden away behind some shops and galleries and over a bridge on the south side of the Village, but once you’ve found it you’re in for a triple treat. First, weather permitting, ask for an outside table. Very fine view of the Santa Ritas. Second, the margaritas – as fine a margarita as I have had anywhere. Third, the food is very good. 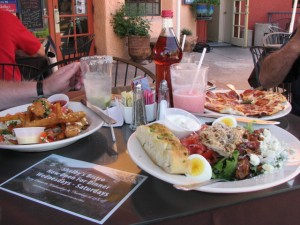 Three of us went to Tubac Saturday to video the Anza Day festivities on a pleasantly warm October afternoon.We had not eaten at Shelby’s in at least five years. Neighbor Roy ordered pizza. Ms. Karen had a Cobb salad accompanied by a slice of fresh focaccia bread. I had the fish & chips.
We met Anthony, the owner and chef, who has a flare for blending flavorful herbs and spices in just-right proportions. I asked him about the name … Shelby’s. Said his restaurant is named for his niece.
Roy’s pizza had a very thin, quite tasty crust. I asked for and received a slice. Very good. Ms. Karen said her Cobb was excellent. Likewise my fish & chips.
Aside from the fact that my margarita was first rate, it came in a large glass. Usually, margaritas are served in a long-stemmed, but shallow “margarita” glass, which is quaint but masks the fact that it doesn’t hold much liquid. All too often, the margarita has disappeared long before the meal is finished. That’s good for business, I suppose, since it usually prompts me to order another. Not so at Shelby’s. I finished my fish, chips, and margarita at the same time.
Service was personable and efficient. Ms. Karen had ordered a frozen strawberry daiquiri. She mentioned to our waitress that it seems a little light on the alcohol. A minute later, our waitress returned with a shot of rum and a smile.
Shelby’s menu is eclectic: American to French, pizza to vegan, seafood to sandwiches. They are now open for dinner Wednesday through Saturday evenings. There’s a 25% discount on dinners Wednesdays and Thursdays. We have not had dinner at Shelby’s, which is a good excuse to go back.

See our list of other Best Tubac Dining reviews here.