Restaurants in Tombstone can be a hoot. Here you can get decent steaks, BBQ ribs, and burgers, all served with a large helping of Western history. Our preference runs to the authentic Old West establishments. Otherwise, what’s the point of coming to Tombstone? 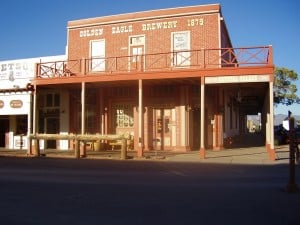 Unlike many of the buildings on historic Allen Street, the ground floor of the Crystal Palace is authentic 19th century, although it has undergone extensive renovation. 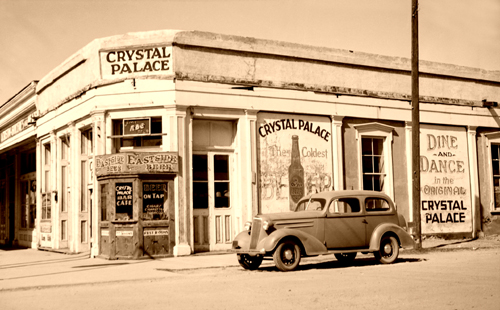 Moreover, when alcohol, gambling, and prostitution were outlawed, this building experienced many reincarnations, including a warehouse, theater, and bus depot.

As now, the original building at this location was two stories and did, in fact, have upstairs offices, including the Marshall’s Office of Virgil Earp. The original Golden Eagle Brewery was located in the rear. Today, the bar & back bar are 1960’s replicas of the 1880’s originals that were lost to antiquity.

At the Crystal Palace you can get a decent steak (I prefer their ribeye), a good burger, and even a good salad.

The BBQ pork & beef ribs at the Longhorn are perhaps the best in town. The pork ribs tend to be a little more tender than the beef. The trick here is to wait until the afternoon so that the ribs have time to slow-cook and take on a rich smoky flavor. 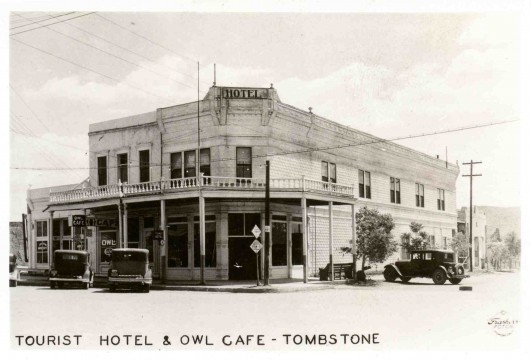 The Longhorn is located on a very historic property. December 28, 1881: assassins fired shotguns at Marshall Virgil Earp from, what was then, the new building on this Allen Street lot. Marshall Earp was badly wounded, but survived.

The first building here housed the Meyer’s Bros. Clothing Co. Later, it became the Bucket of Blood Saloon. Then in 1909, it was remodeled and became the Owl Cafe’ & Tourist Hotel. That incarnation burned down in 1942. The present-day building was erected in the 1950’s and became the Longhorn Restaurant in the ’70’s. 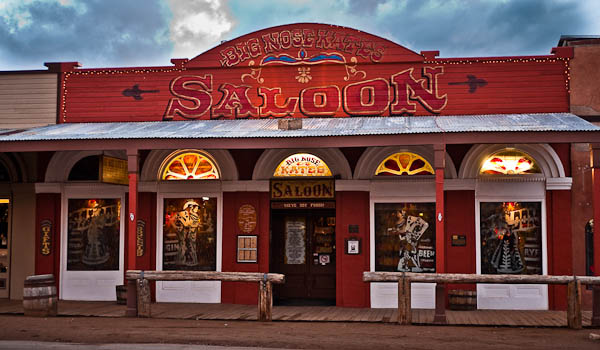 Big Nose Kate’s Saloon is authentic Old West history, but this establishment had little to do with Kate.
She, Mary Katherine Horony Cummings, was a sometime prostitute, sometime madam, and long-time-sometime companion of Doc Holliday.
In 1880, the building that is now Big Nose Kate’s Saloon was the Grand Hotel. It is true that Kate & Doc often stayed, ate, gambled, and drank at the Grand.
Other famous characters also frequented the Grand, including Wyatt & Virgil Earp. It was here that Ike Clanton and Frank & Tom McLaury stayed the night before the THE Gunfight.

The Grand Hotel opened September 9, 1880 with a lavish, invitation-only ball. Like so much of Tombstone along Allen Street, it was destroyed in the fire of May 25, 1882. The bar, however, did survive because it was located in the basement.

Today, that same bar that once served Tombstone’s most famous residents, is on the main floor and a gift shop and tunnel to a mine shaft are downstairs. The only other long bar to survive Tombstone’s two great fires is the one at the Bird Cage Theater.

Big Nose Kate’s serves decent pub grub with a full bar and good selection of cold brews. On the weekends and holidays, they often have local entertainment, usually a good ol’ boy a singin’ and a strummin’. Kate’s is a fun place, even without the gambling, drunken shootouts, and soiled doves of yesteryear.

Dining In Tombstone With Kids

During the day, the Crystal Palace and Big Nose Kate’s saloons are appropriate for kids. They can soak up the Old West history while enjoying a sandwich accompanied by a cold “sassparilla”.

After dark, Tombstone on Friday and Saturday nights is NOT for kids. Only the saloons are open and they are rockin’ with LOUD Western music and inebriated (way past their prime) adults engaged in Western dancing that resembles a primitive courtship ritual.

The Depot at 10th & Allen Street is beyond the historic district. Of the random two dozen or so locals I have asked about the best place to eat in town, ALL said, “The Depot”. I’ve eaten there a couple of times and give it 3-Saguaros; OK food, but not authentic Tombstone.

Born the Russ House, a restaurant and boarding house owned and operated by Nellie Cashman, sometimes known as the Angel of Tombstone. Now Cafe Margarita, serving Mexican and a “Touch of Italian”, is a pleasant way to spend lunch or dinner on the Courtyard patio, weather permitting. I’ve tried both Mexican and Italian dishes here. The Mexican dishes were a tad bland, but the Italian dishes were very good.

The OK Cafe’ is OK. A basic diner serving basic American dishes at the corner of 2nd & Allen Street. Nothing fancy. A family-friendly place, particularly if you’re on a tight budget. A favorite of many locals.

For Dining reviews of the Best Dining in Southern Arizona visit us here.