I recently read yet another account of the Chiricahua Apache wars with the Republic of Mexico and the United States of America that raged from 1861 to 1886. Geronimo: The Man, His Time, His Place (The Civilization of the American Indian Series)

was written by noted Native American historian Angie Debo and published in 1976. 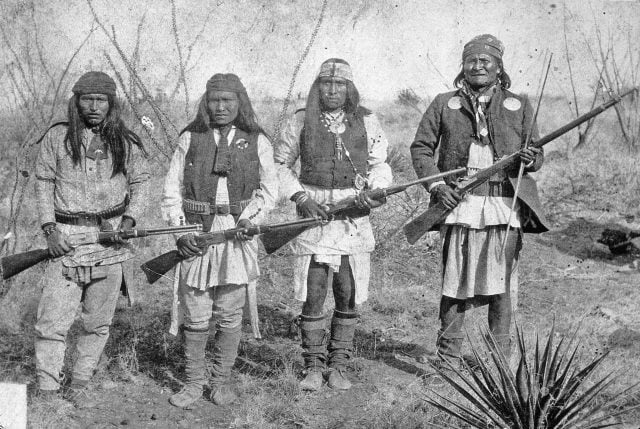 Geronimo (rt) and 3 of his warriors, including his son Chappo (far left). This photograph was taken by famous Tombstone photographer C.S. Fly in 1886. Fly’s photos of these Apaches are the only known photographs of Native Americans still active in the field against the United States.

Every time I pick up another book about the Chiricahua Apaches, I wonder if I had not already read all that is worth knowing about these fascinating people in general and their famous leaders in particular. In our Southern Arizona Guide library are some of the most definitive and authoritative accounts, dog-eared and annotated by me for future reference. Included in this collection are my thoughts on Ms. Debo’s excellent account.

Here they are presented by the date they were initially written and/or published. 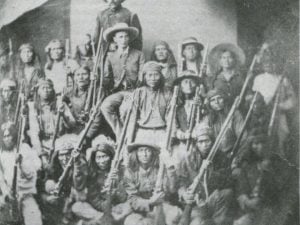 . Gatewood was, in 1885, the tip of the U.S. Army’s spear as it attempted to penetrate into the vast and rugged Sierra Madre of Northern Mexico to flush out the last of the hostiles. His memoirs were never published before his death in 1896. Louis Kraft collected and edited Gatewood’s notes and published this indispensable volume in 2005.

1906. Geronimo: His Own Story: The Autobiography of a Great Patriot Warrior

: edited by S. M. Barrett. Geronimo was finally persuaded to tell his story. President Theodore Roosevelt was finally persuaded to permit it. The old warrior spoke through his nephew and interpreter Asa Duklugie as S.M. Barrett, superintendent of schools in Lawton, Oklahoma took it all down in shorthand. It seemed to me almost surreal to read the actual words of this, “the worst Indian who ever lived.” Of course, Geronimo knew better than to speak of the many atrocities he and his war parties committed against their Mexican and Anglo enemies. He thought that the Army might yet hang him. But he does give a good accounting of himself and his people as they outsmarted and outfought massively superior forces. His own story is full of his descriptions of Apache life-ways: their history, ceremonies, traditions, and religious beliefs. Like all autobiographies, Geronimo’s is self-serving. Yet it offers genuine insights into the man’s thinking, his respect for Apache life-ways, and the love he has for his people. 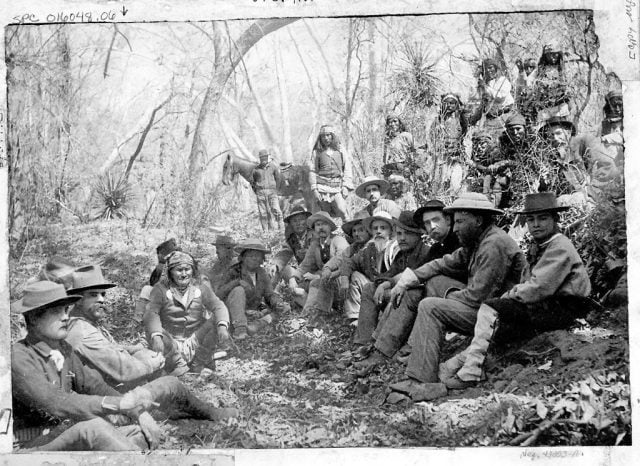 General Crook (seated on log 2nd from right) trying to convince Geronimo (seated on ground left) to surrender. March 1886. He did. Then he didn’t; costing Crook his command.

1929. By Britton Davis – The Truth about Geronimo

. Twenty years after the death of the old warrior, this fine account of the last Geronimo War (1885-86), is first-hand. Davis knew Geronimo … and did not like him. Why should he? They were enemies. He characterized Geronimo as a “thoroughly vicious, intractable, and treacherous man. His only redeeming traits were courage and determination. His word, no matter how earnestly pledged, was worthless.” But to Davis’ credit, he offers us a factual telling from his point of view, which did not always concur with the Army’s official reports or sensational media accounts.

by Dan Thrapp. Time passes. The next seminal telling of the Chiricahua saga came from historian Dan Thrapp in Al Sieber: Chief of Scouts. A German immigrant, Civil War veteran, cowboy, and finally Chief of Scouts, Sieber worked for General George Crook and could easily be described as a man-hunter. He was also a man-killer in Crook’s service. He called Geronimo a liar to his face. Not many men did that and lived to tell about it. Many Apaches gave up and settled on their reservation because they believed that Sieber could track them anywhere, leading Crook’s army to their most impregnable strongholds where the soldiers would attack and kill everyone in the village they could … men, women and children. 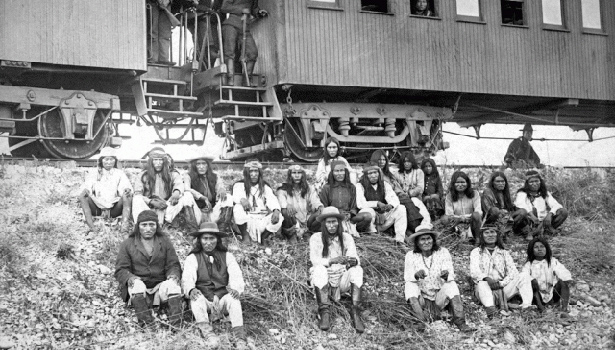 The last of the hostile Apaches being transported from their ancient homeland in Arizona to prisons in Florida. Chief Naiche is front and center. Geronimo is to his immediate left.

This telling of the Chiricahua story is the best up to its time; well-written, extremely well-researched, and full of historical and cultural insights. Thrapp, like Sweeney, is no fan of Geronimo and thinks of him as a much lesser man than Cochise. But then I have the advantage of additional, reliable information. Much has come to light in the years following Conquest that show many sides of Geronimo other than the vicious, sometimes sadistic warrior. And we learn about them through Eve Ball and Angie Debo. 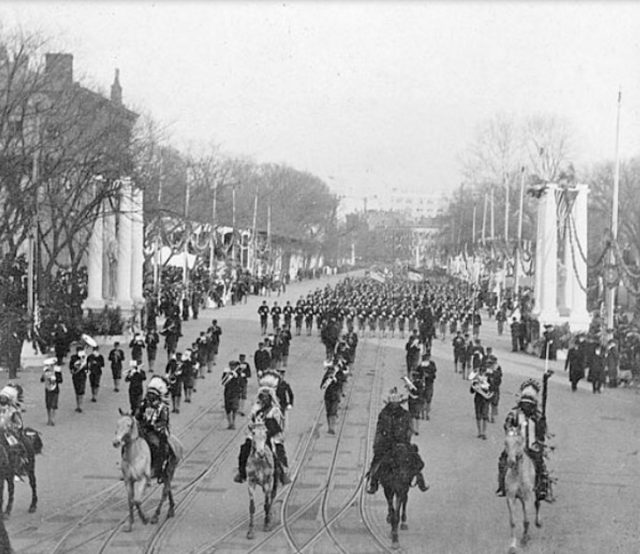 . In the Days of Victorio; Recollections of a Warm Springs Apache

and Apache Voices: Their Stories of Survival as Told to Eve Ball

. These are first and second-hand accounts of that turbulent, horrifically violent time in the American Southwest when the Apaches resisted the alien invasion of their ancestral lands. There is no finer account of what it was like for the Chiricahua Apaches to be hunted to near extinction, the survivors forced onto the despised San Carlos reservation that could not support a human community. The remnants of their people, including Geronimo, were made prisoners-of-war for decades in hellholes called Fort Marion and Fort Pickens Florida and Mount Vernon Alabama where their young children were kidnapped “for their own good” and soon died in faraway places, while the captive adults died of malnutrition, disease, and hopelessness. Ms. Ball lets them tell their own stories. Here we meet the descendants of the legendary Chiricahua leaders; Cochise, Victorio, Geronimo, Loco, Chihuahua, Juh, and old Nana. It should come as no surprise that they have their own perspective, quite different from the Whites who have written about them. 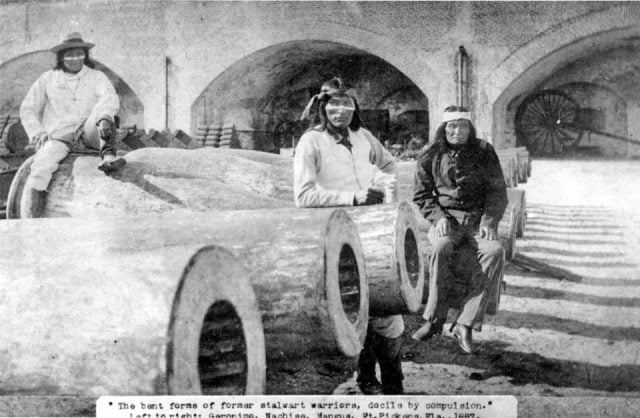 1977. Geronimo: The Man, His Time, His Place (The Civilization of the American Indian Series)

: Angie Debo. Ms. Debo builds significantly on the works of Eve Ball and Dan Thrapp. For me, what made Debo’s Geronimo so important to my understanding of this warrior, his people, and his time, is the many heretofore unknown, but well-researched facts and well-considered conclusions that gave me far more balanced, in-depth insights into the character of Geronimo and his reasons for what he did based on his understanding of the realities he faced. The final third of this book is devoted to the Chiricahuas time as prisoners-of-war and the extraordinary events that Geronimo was to experience during the last two decades of his long life. For example, I never thought of Geronimo as a practical businessman, a regular entrepreneur. But consider, upon his death, the old warrior had over $10,000 in his bank account from selling his homemade bows and arrows, buttons off his shirts, hats, his portraits and autographs. In all, Debo’s characterization of Geronimo is far more favorable than those offered by Thrapp, Davis, Sieber, and Sweeney. And, I think, she makes a strong case for this more generous depiction.

1991. From Cochise to Geronimo: The Chiricahua Apaches, 1874–1886 (The Civilization of the American Indian Series)

: Edwin Sweeney. This excellent volume covers the period after Cochise’s death in 1874 to Geronimo’s final surrender in 1886 in more detail than any other work to date. Mr. Sweeney has all the aforementioned histories to work with, but with a researchers’ determination, he ferrets out much never-before-known details, including Mexican archives, to fill in many voids in previous books on the Apache wars. This is an exceptionally important volume. But the fullest understanding comes from reading all of these because each one offers much that is unique to the author’s experience, research, and perspective. 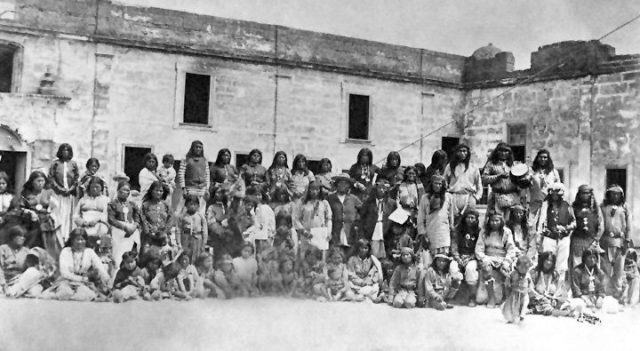 1993. Once They Moved Like The Wind : Cochise, Geronimo, And The Apache Wars

: David Roberts. If I could only re-read one of these excellent accounts, this would be it. In one sense, this is a beautiful re-telling of the essential Chiricahua story contained in these other books. In another sense, Roberts adds significant detail and insight, particularly regarding the underlying reasons for the many breakouts from their reservation that prolonged the Apache Wars year after miserable year: misunderstandings, distrust, ignorance, bigotry, treachery, and most of all, broken promises.

Roberts does a fine job of bringing to life the characters involved in this whirlwind of violence: the ferocious, but fiercely honest Cochise; General Crook, the Army’s best Indian fighter; John Clum, arrogant, but honest Indian agent; Lozen, the sister of the great Victorio and a warrior so highly skilled that she was revered by her people; and Juh (pronounced Ho’), whose beautiful singing voice could overcome his stutter. His brother-in-law Geronimo would often interpret instructions to his warriors as Juh applied his military genius to the Chiricahua’s survival problem; and of course the most controversial of all, Geronimo. He lied, reneged on promises, and slaughtered his enemies with abandon because he feared what the Americans and Mexicans would do to his people. Sadly, his fears were ultimately realized. Roberts’ description of the appalling Chiricahua losses before and after they became prisoners-of-war is heart wrenching.

In conclusion, any one of these books will serve to illuminate the reader as to what life was like during the Apache Wars.