[—ATOC—]
[—TAG:h3—]If you want to understand Tucson’s history & rich cultural heritage, you will find these downtown museums both educational & fascinating.

The Jewish History Museum is housed in an old synagogue built in 1910. It is not spacious, yet it offers serious exhibits related to the contributions of many Jews, such as the Drachman brothers, and the vitality of early Tucson. Did you know, for example, that Tucson has had 5 Jewish mayors?

Your understanding of Tucson history will be seriously incomplete if you are not aware of the Jewish community’s contribution to the development of our city.

Whenever the JHM is open, a docent is there to enlighten. The exhibits only tell a part of the story. The docents bring the exhibits to life. 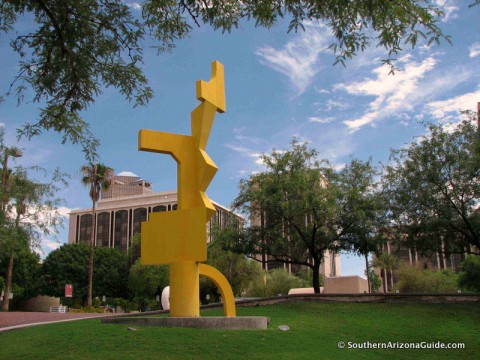 Sculpture In Front Of Tucson Museum Of Art

If you enjoy Southern Arizona and love art and history, you will surely appreciate our Tucson Museum of Art. The permanent exhibits in the main gallery are small, but worthwhile. However, on permanent display in the adjacent historic buildings are several treasures, including the Pavilion of Western Art in the Edward Nye Fish House, and Latin American, pre-Columbian, and Spanish Colonial era art in the Stevens/Duffield House.

The historic Romero House is where you will find students of all ages busy in the Museum’s ceramics programs working their potter’s wheels and firing their clay creations in the kilns. La Casa Cordova, one of the oldest buildings in Tucson, houses displays showing life in the Old Pueblo when it was still a small Mexican village.The J. Knox Corbett House, once home to a wealthy Tucson merchant, was built at the turn of the previous century and is filled with furnishing from that era. We have a video tour the Corbett House. To watch, click HERE.

Every few months, the Museum offers new shows from major traveling exhibits. These temporary exhibits are always visually stunning and are usually accompanied by compelling narratives, such as the recent Frida Kahlo exhibit and Scott Baxter’s amazing portraits: 100 Years – 100 Ranchers.

Dining At The Museum of Art
Another delight at Tucson Museum of Art is Cafe’ A La C’art, where you can get a fine breakfast; a fresh salad or generous sandwich for lunch (excellent burgers) or enjoy duck, scallops, lamb, or fish for dinner. They also have the best desserts.

The Museum is located on a full city block bounded by West Alameda, North Main Ave, West Washington, and North Meyer in the historic El Presidio Neighborhood located in the heart of downtown Tucson. The official street address is 140 North Main Avenue. 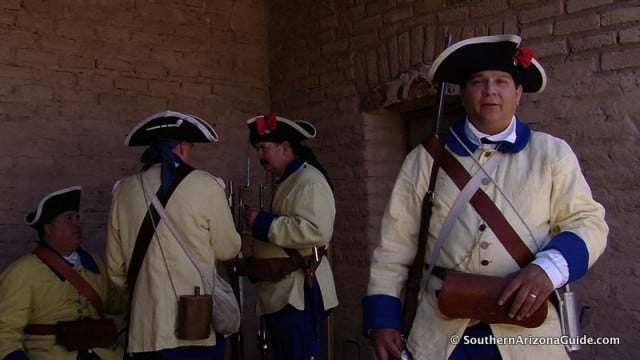 The Spanish built a fort, or presidio, in this remote northern region of New Spain at the same time a few British colonists on the Atlantic coast of America declared their independence from the English Crown, 1776.

Originally, “El Presidio San Agustin del Tucson” was only a few scattered buildings, some behind wooden palisades. It wasn’t until 1783 that the thick adobe walls were completed, following a near-disastrous Apache attack. At it zenith, the presidio encompassed about 11 acres of what became Downtown Tucson.

This walled compound was constructed only a few city-blocks east of the Santa Cruz River on a Ho-ho-kam’ village site that had been abandoned around 900 C.E. Their descendants, the Pima and Papago (now Tohono O’odham) Indians had lived here for hundreds of years before the Spanish arrived. When the presidio was completed, the natives lived outside the walls.The presidio was still intact when the United States bought what is now the southern half of New Mexico and Arizona from Mexico in 1854. However, soon thereafter, the Americans began dismantling the massive walls to make way for their town. The last standing section of the presidio walls was destroyed in 1918.

Reconstruction of a portion of the old presidio began in 2006. Today, you can visit the presidio and its permanent exhibits & gift store, and occasional festivals, re-enactments, and official ceremonies. 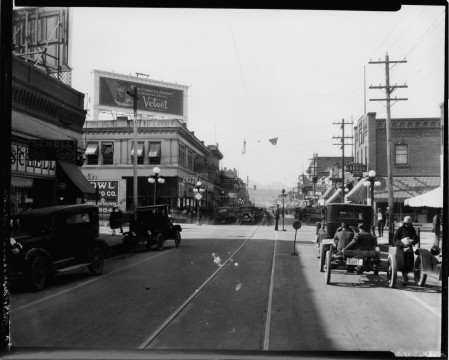 Here you will find the story of Tucson from the late 19th to the early 20th century. It is a most interesting story, particularly when you consider what locals had to endure without air conditioning.

Excellent exhibits depict early Tucson businesses, such as drug stores, barbershops, hotels & saloons, and introduce us to many of the growing community’s prominent individuals.
Here too is the Dillinger exhibit about how, in 1934, Tucson police captured one of America’s Most Wanted.

On a Saturday in mid-November 2022, Ms. Karen and I ventured to Tubac Presidio for a Cast of Characters Tour. This tour runs Saturdays until the end of the year but sign up early. Billed as a docent-led tour of the historical characters from Tubac’s storied past, it was led … END_OF_DOCUMENT_TOKEN_TO_BE_REPLACED

On a Friday in mid-November 2022, Neighbor Roy and I dined at Barnfire Mesquite Grill in Marana at Cortaro Farms Road and Thornydale. Yes, that is right, “BARNfire”. I found this place by accident, but a look at its online menu convinced me that we should give it a try. … END_OF_DOCUMENT_TOKEN_TO_BE_REPLACED

On a Friday in early November, 2022, Neighbor Roy and I dined at Barro’s Pizza in Marana. Earlier in the week, I had asked him what he wanted to eat come next Friday, and he exclaimed, “Pizza”. But it was up to me to choose which pizzeria we would go … END_OF_DOCUMENT_TOKEN_TO_BE_REPLACED

In late October 2022, Ms. Karen and I ventured out to partake in a walking tour of the Old Court Street Cemetery with Guide Homer Theil, the archaeologist who discovered the remnants of the original Tucson Presidio, now a public museum. This tour lasted about an hour and a half. … END_OF_DOCUMENT_TOKEN_TO_BE_REPLACED

Following the Gunfight at the OK Corral, Ike Clanton filed murder charges against the Wyatt Earp and Doc Holliday, as well as Virgil and Morgan Earp who had been wounded in the gunfight.

END_OF_DOCUMENT_TOKEN_TO_BE_REPLACED

On a Saturday in late October 2022, Neighbor Roy and I dined at Dolce Vita Italian Bistro on East Fort Lowell in Tucson. We arrived at noon and the place was not crowded. In fact, we were the only diners until a lady arrived halfway through our meal. A pleasant … END_OF_DOCUMENT_TOKEN_TO_BE_REPLACED

The New Heritage and Visitors Center opened at about the same time that the multimillion-dollar renovation was completed on the Old Pima County Courthouse. This renovation included a massive renovation as well as the New Visitors’ Center Headquarters, the Chamber of Commerce (VisitTucson.org), and the Alfie Norville Mineral Museum. Shortly … END_OF_DOCUMENT_TOKEN_TO_BE_REPLACED

Change of plans. Here is the exterior of the same church as last week. Send your best guest to: info@southernarizonaguide.com. LAST WEEK’S PIC We will make the announcement next week on this. Here are the winners from the interior of this church. ChuckS, LauraJ, PJP. DeborahM. guess again please. Thanks … END_OF_DOCUMENT_TOKEN_TO_BE_REPLACED

A few weeks back, Neighbor Roy gave me a clipping from the Arizona Daily Star newspaper about their recommendations for local dining. On it was a mention of Indian Twist restaurant on East Camp Lowell in Tucson. I asked Roy if he wanted to try it and he said, “Whatever.” … END_OF_DOCUMENT_TOKEN_TO_BE_REPLACED

Children and Family Museums Are you looking for museums that would be suitable for your children, which will be captivating, fun and educational? How about some of these? Some of these are good for children with a short attention span and some for the whole day. Many of these have … END_OF_DOCUMENT_TOKEN_TO_BE_REPLACED

To learn about more worthwhile museums in Tucson, whether art or other, see our list of the Best Museums here.