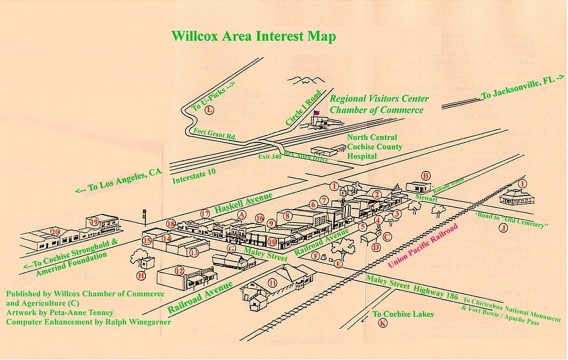 Here are a few of our recommendations for the best things do around Willcox, Arizona. Most have something to do with the area’s history or its vineyards. In the past, Willcox was known for its ranches and cowboy lifestyle. Now it is quickly becoming the place to seek out wine and wineries. Hopefully, it can be both. We love its laid back, Route 66 feel.

Willcox is about an hour and a half east of Tucson on I-10. The town has seen better days, but fortunately, the citizens have preserved many of the historic buildings. Some are pre-1920. Others were build pre-1900. So one of the best things to do around Willcox is to take the short, self-guided walking tour of the historic downtown. Stop into the Willcox Chamber of Commerce as you exit I-10 for a map. It is a little hard to find, so use your GPS. It is on the north side of the freeway first road east off the main road north near Apple Annie’s Farm Outlet. Grab a pie or head out to Apple Annie’s for some apples, peaches, and corn, depending on the season. Read More 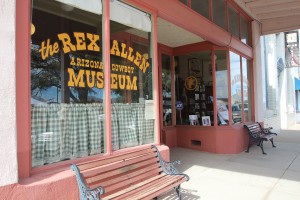 Western Movie Star – The main attraction in historic downtown Willcox along Railroad Avenue is the Rex Allen Museum. If you are younger than 65 as of 2012, it is unlikely you will know who Rex Allen was.

Through the 1950s & ’60s, Mr. Allen was a singer-songwriter, Western movie star, and narrator for many Disney nature films.

At one time, he was almost as famous as Roy Rogers and Gene Autry. In all, he starred and sang in 19 Westerns, and earned a star on Hollywood Blvd. 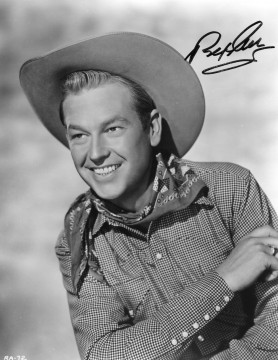 So popular was Mr. Allen that he became a comic book character for Dell Comics. With his trademark white Stetson, he was always the good guy. In his movies, he had a sidekick for comic relief: first Buddy Ebsen (later star of Beverly Hillbillies), then Slim Pickens.

Rex Allen was known as the Arizona Cowboy. His museum exhibits a lot of memorabilia, shows some of his old Westerns, and plays his music. His statue (and his ashes) are across the street in Railroad Park.

During Rex Allen Days they have a great old time parade and Rex Allen Jr. has been known to show up.

Today far more people are familiar with the Western ballads of Marty Robbins than the songs of Rex Allen. Mr. Robbins has a small museum next to Rex Allen’s. A singer-songwriter, Mr. Robbins wrote and sang such hits as “A White Sportcoat”, “My Woman, My Wife”, “El Paso”, and “Big Iron”.

Both Frankie Lane and Elvis Presley recorded Mr. Robbins’ “You Gave Me A Mountain”.

The Academy of Country Music honored Marty Robbins by naming him Artist of the Decade (1960’s). In 1982, he was elected to the Country Music Hall of Fame. Like Mr. Allen, he has a star on Hollywood Blvd. and Arizona claims him for its own.

Next to the Allen & Robbins Museums on Railroad Avenue is the Keeling Schaefer Vineyards’ Wine Tasting Room in the restored 1917 Willcox Bank & Trust building. This is a fine venue that includes a worthwhile art gallery.
Flying Leap Vineyards has several tasting rooms about Southern Arizona, one of which is on the corner or Railroad Avenue in Willcox. It also sports an art gallery.
Two miles west of Willcox: Coronado Vineyards. This is one of our favorites. Here you can taste their various wines while sitting out on the deck. They no longer serve dinner.
Visit Lawrence Dunham Vineyards and take a side trip to Johnny Ringo’s Grave. You can even stay at the Sunglow Ranch should you desire.
There are several other wine tasting rooms close by. To learn more, visit the new site promoting Willcox Wines here.

In historic downtown Willcox: Big Tex BBQ. This is just around the corner from Railroad Park. The restaurant is an old railroad car. Excellent BBQ ribs.

I-10 runs through Willcox. Thus, there are many modern motels: Days Inn, Holiday Inn, etc. Pick your favorite. We are not familiar with B&B’s in the area. The one’s we can recommend are miles from Willcox. If you know of one, let us know. We would like to visit.

January: Wings Over Willcox. Celebrates the arrival of the migrating Sandhill Cranes. Several days of Birdwatching events, lectures, hiking and other nature events.

October: Rex Allen Days. Celebrates the Old West in general and the Western movie star and singer-songwriter in particular. 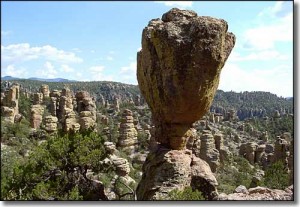 About an hour south of Willcox is one of our favorite places: Chiricahua National Monument. Wildlife, fantastic rock formations, hiking, camping, and birdwatching.

Once you enter the Monument, stop at the visitor center to get oriented and find out the schedule for guided tours of Faraway Ranch. Take the tour. To view our photos and notes on our road trip to the Monument, click HERE. 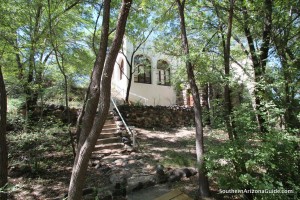 About an hour NW of Willcox on a fairly well-maintained dirt road is Muleshoe Ranch Preserve a part of the Nature Conservancy. Click here for our Muleshoe feature. This is a Southern Arizona paradise. Take a picnic or rent one of their casitas for a night or two. Enjoy the natural hot springs under the stars. Excellent! 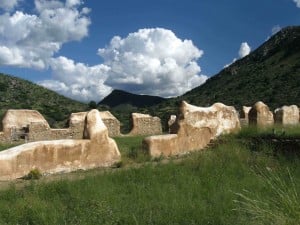 About an hour east are the ruins of Fort Bowie. It too is off a fairly well-maintained dirt road, plus an easy hike of about a mile. This fort was hugely important from the 1860’s through the final surrender of Geronimo in 1886. If you are not familiar with the history of Ft. Bowie, please click here. For more information about Ft. Bowie, visit the Ft. Bowie National Historic Site.

Just north of Willcox, everyone loves to visit Apple Annie’s Orchard at Harvest time. Apples and peaches are their specialty but they also have corn and other goodies. Apple Annie’s promotes festivals around these times, serving hamburgers and pies as well as hay rides. Fun for the whole family. In October there is a Corn Maze as well as a Pumpkin Festival. Visit Apple Annie’s Website for more information and directions.

Editor’s Note. Karen Weston Gonzales is a talented free lance writer. I first read her story about Southern Arizona pioneer, Tom Jeffords, in Tombstone Times to which I subscribe. The story is reprinted here with permission. The story is true and offers a clear account of one of the most … END_OF_DOCUMENT_TOKEN_TO_BE_REPLACED

Part II – This is the second in a series on the great Chiricahua Chief, Cochise, and his part in the fascinating history of Southern Arizona. For the First Part in the series, Please see the post on Cochise Becomes a “Reservation Indian”. Confederate Soldiers Occupy Tucson In February 1862, … END_OF_DOCUMENT_TOKEN_TO_BE_REPLACED

Part I – This is the first of a series on the great Chiricahua Apache chief, Cochise, and his part in the fascinating history of Southern Arizona. Click here for some background: A timeline of the Apache Wars and the most notable leaders of both sides of the conflict. Chiricahua … END_OF_DOCUMENT_TOKEN_TO_BE_REPLACED

Friends of ours recently traveled to Apple Annie’s in Willcox for some fruits and veggies for canning. I am ever fond of Elaine’s Bread and Butter Pickles. I grew up in a small farming town in northern Utah and, once we moved to Tucson, found myself missing the pick-it-yourself produce … END_OF_DOCUMENT_TOKEN_TO_BE_REPLACED

Unlike the many images we have of Geronimo today, no photograph of Cochise exists. We only know what he looked like from contemporary written accounts; mostly American and Mexican. These we owe to the very few people of European descent who lived to tell about their close encounter with the … END_OF_DOCUMENT_TOKEN_TO_BE_REPLACED

Almost everything we “know” about the outlaw gunman Johnny Ringo is either factually inaccurate, unsubstantiated hearsay, or intentional embellishment by authors to sell their books and magazine articles. Here is what we know with a reasonable degree of certitude. We know he was born in Indiana in 1850 and died … END_OF_DOCUMENT_TOKEN_TO_BE_REPLACED

Talk about towns that time forgot. Willcox is a town that is changing slowly, but not without a fight. It’s a quiet fight, but slowly the cowboy ways and country music are giving way to progress.

END_OF_DOCUMENT_TOKEN_TO_BE_REPLACED

For a quarter century, 1861 to 1886, Ft. Bowie was prime real estate known as Apache Pass. The Americans wanted it for their stagecoaches & supply wagons. The Chiricahua Apaches wanted it because their people had lived here for at least two centuries. Both sides were willing to pay for it in blood.

END_OF_DOCUMENT_TOKEN_TO_BE_REPLACED

Our perfect 3-Day Road Trip started in Tucson and headed east to (A) Willcox. From there we continued on I-10 over the AZ-New Mexico border to NM Hwy 80. Then south to Rodeo, NM where we visited the Chiricahua Desert Museum. Leaving Rodeo, we continued south on 80 to (B) … END_OF_DOCUMENT_TOKEN_TO_BE_REPLACED