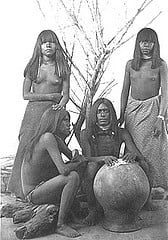 Pima Indians, the indigenous people who lived in the area around Mission Tumacácori in the 17th century, referred to themselves simply as “People”. Such was the case in most technologically primitive cultures around the world that had little or no contact with other groups.

In the Pima language, the word for “People” is “O’odham”.

It is a very human characteristic to consider ones own clan or tribe to be “The People”, as in “The Only People”. The People are good. The People nurture you, protect you. They are your parents and relatives and friends of your family. They are people you can trust; people that you can depend on in hard times.

All other human groups are “Not The People”. They are “The Other”. Xenophobia, fear of “The Other”, is in our DNA, literally. This fact of nature goes a long way to explain why, throughout history, different clans, tribes, and nations war against each other. “The Other” embodies all the bad human traits. The Other is lazy, dishonest, treacherous. “The People” must defend themselves against “The Other”.

When the Spanish arrived at Tumacácori in the 1600’s, they referred to the O’odham who lived along the rivers as “Pima”. They called this most northern outpost of New Spain “Pimería Alta”; Land of the Upper Pimas.

Those indigenous people they found living in the desert they called “Papago”.

“Papago” is the Spanish word for “tepary-bean eaters”. By the late 20th century, the Papago got tired of being referred to as bean-eaters or beaners. So they officially changed The People’s name to Tohono O’odham, meaning Desert People.

Their homeland included the area that is now Southern Arizona and the northern portion of the state of Sonora, Mexico. A peaceful people unless the need arose to defend themselves, the O’odham were farmers who raised corn, beans, and squash using flood irrigation. 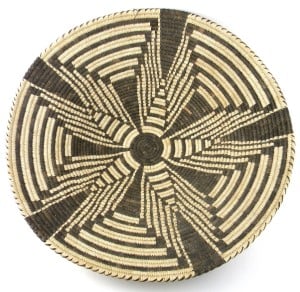 Today, the Tohono O’odham are famous for their basket weaving. Once this skill was necessary for gathering and storing food. Many create exquisite baskets using the same material and weaving techniques that were used by their ancestors. Collectors pay hundreds, sometimes thousands of dollars for these magnificent works of art.

One of “The Others” was the Apaches. “Apache” is a Zuni word for “enemy”. The Apaches were, by profession, raiders. The Apaches had the same primitive mindset. Pimas and Papagos were “The Other”. The other had little or no value. They were not people. So stealing from them, killing them, enslaving them was morally permitted, even encouraged.

To the Pimas and Papagos, the Spanish missionaries and colonists were “The Other”. In 1751, the indigenous population rebelled against “The Other” for perfectly understandable reasons. To the Spanish, “The Other”, the native people, had no rights that they, the Spanish colonists, were bound to respect.

The Spanish stole their land, belittled their beliefs, raped their women, enslaved their men. Who among us today would not have rebelled?

Apaches also treated the Pima and Popago people much the same as did the Spanish. The Pimas and Papagos took their revenge on some of their Apache tormentors during the Camp Grant massacre of 1871. These Pinal and Aravaipa Apaches had already surrendered to the U.S. Army and were under the Army’s protection when Pima and Popago warriors, in a pre-dawn surprise attack, slaughtered more than a hundred Apache women and children.

Such is the early history of Tumacácori, Tubac, and Tucson. If you understand the history of Southern Arizona, there is little to romaticize. It was a hard, hard country with precious little justice.

(Note. One may reasonably wonder why the early Spanish soldiers, missionaries, and settlers arriving in what is now Southern Arizona referred to the aborigines as “Pima”. The short name, “Pima” is believed to have come from the phrase pi ‘añi mac or pi mac, meaning “I don’t know,” used repeatedly in their initial meeting with Spanish.)

See a short video showing images of the Native American Peoples that inhabited the area.

For more information, you might enjoy The Papago and Pima Indians of Arizona

by anthropologist Ruth Underhill. She studied these native groups in the 1930’s.
Also,The Tohono O’odham and Pimeria Alta (Images of America: Arizona)

by Allen McIntyre. Published by Images of America: Arizona.