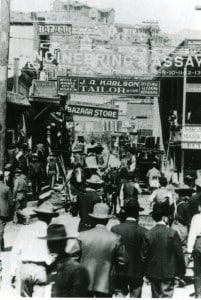 On a cold December day in 1883, five men robbed the Goldwater & Casteneda Store on Main Street that substituted for Bisbee’s only bank. They did so believing that the mining company’s payroll was locked inside the store’s safe. What started as a quick and easy robbery ended in the death of almost a dozen people.

The robbers quickly discovered a problem. The mine’s payroll had not yet arrived. Foolishly, the five robbers stuck around to steal what they could from the store, its owners, and customers. This took time. Time they did not have.

Two of the robbers stood guard outside the store, rifles ready. Their presence attracted the attention of some of Bisbee’s rough and ready citizens, who were typically well-armed at all times. Within minutes, four citizens lay dead or dying, including a New Mexico police officer who tried to intervene, and a pregnant woman, shot dead through a window by a stray bullet.

As the robbers rode south out of town, there was a hail of gunfire between them and the crowd of citizens that had gathered. Amazingly, none of the robbers was hit, except for a grazed jacket.

One citizen jumped on his horse and headed north to Tombstone to notify the sheriff. He made the 22-mile trip in less than two hours and along the way passed the stage carrying the riches of the Copper Queen payroll.

The next day, Deputy Sheriff Daniels and his posse headed out to hunt down and capture the culprits. With them was a man who had just started a business in Bisbee – a fellow named John Heath. Once on the trail of the desperados, Mr. Heath did something that the deputy sheriff thought a bit odd. Mr. Heath tried to convince the posse that the robbers had actually headed north, perhaps toward Tombstone. Deputy Daniels didn’t buy it.

Daniels and his posse continued the pursuit south and eastward toward the Chiricahua Mountains. Heath headed north. Eventually, Daniels tracked the robbers, found their exhausted horses and a rancher who said they had stolen five of his horses.

The posse continued tracking east, in the opponent direction of Tombstone, and came upon a prospector who had seen the robbers divvying up the stolen money and goods. And one more thing. The miner told the deputy that he had seen the robbers a week earlier getting instruction from their leader – John Heath. Daniels sent his posse back to Bisbee to arrest Mr. Heath and he, Daniels, continued to pursue the five robbers alone.

The Copper Queen Mining Company was not an outfit to be trifled with. They posted a reward and printed thousands of handbills describing the bandits and the articles they had stolen. They then went to the considerable expense of distributing these handbills throughout the Southwest and Northern Mexico.One robber was arrested in New Mexico when his barber recognized him from a handbill.

Two others rode to Eastern Arizona where one had a girlfriend. Unbeknownst to this fellow, his girlfriend had – in his absence – acquired a new lover. The robber gave his lady a gold watch, an item mentioned on the handbill, and her new lover recognized it and told Deputy Daniels, who then tracked down the two robbers and arrested them. One wore the coat that had been grazed by a bullet in the gunfight back in Bisbee.

That left two robbers who were not yet in custody. Daniels found them in Mexico, and with the cooperation of the Mexican authorities, brought them back to Tombstone to stand trial. 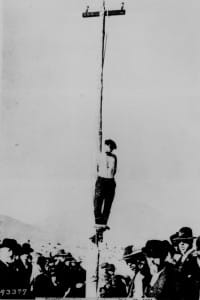 Two months later, a jury found all five guilty of robbery and murder and sentenced them to hang. However, the jury – to the surprise of anyone – found leader John Heath guilty of only second-degree murder. The judge could do no more than sentence Heath to life in prison at the Yuma Territorial Prison [perhaps a fate worse than death].

The honorable citizenry of Bisbee and Tombstone didn’t think justice had been done. So they did what any civic-minded group would do. They formed a lynch mob and broke into the Tombstone jail to extricated Mr. Heath.

On Toughnut Street in Tombstone, Arizona Territory, the mob threw a rope over a telegraph pole. Mr. Heath tied a blindfold over his own eyes. His last wish was for the mob not to riddle his corpse with bullets as he hung from the pole. Tombstone photographer, C.S. Fly, duly recorded the event.

The coroner’s report was interesting. It read in part: “. . . John Heath came to his death from imphysema of the lungs — a disease common in high altitudes — which might have been caused by strangulation, self-inflicted or otherwise.” 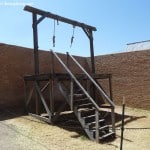 Delaney, Dan Kelly, Dan Dowd, and Tex Howard, were legally hung at the Cochise County Courthouse. They were buried in Boothill Graveyard. While a grave marker for John Heath is currently located in the Tombstone Boothill Graveyard, his body was returned to his family in Terrell, Texas, where he was buried at the Oakland Cemetery in an unmarked grave.