How Tucson’s Wealthiest & Most Prominent Civic Leaders
Committed Mass Murder & Got Away With It.

Today, there’s nothing there. Nothing to suggest what happened in the early morning of April 30, 1871. Nothing to commemorate this blood-soaked ground where between 118 and 144 people, almost all women and children, lay murdered and mutilated. The actual number will never be known with certainty. 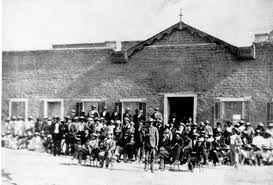 100 Camp Grant defendants outside the Tucson courthouse where they were accused of murder.

Camp Grant, named for the famous Civil War general, was an Army post built at the confluence of the San Pedro River and Aravaipa Creek about 70 miles northeast of Tucson. It was located here in the late 1860’s so that U.S. soldiers could better protect local settlers and miners who had begun to flood into this area near present-day Winkelman. This had been the home to Aravaipa & Pinal Apaches (aka Western Apaches) for centuries.

The post was first constructed in 1860 to deal with the “Apache Problem”. Between 1860 and 1873, the post was abandoned or destroyed and then rebuilt multiple times, and it was known by a variety of names, starting with Fort Breckinridge in 1860 before becoming Camp Grant in 1866.

From this vantage point, the Army hoped it would also be in good position to protect the San Pedro River overland freight route that ran from New Mexico to California from bands of Western Apaches. Read More

The Apaches: Hated and Feared 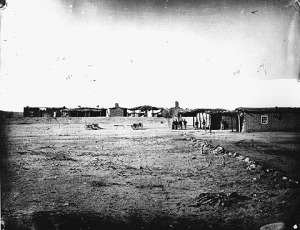 These Aravaipa & Pinal Apaches had few friends among other nearby tribes. Long before the coming of the Spanish, Mexicans, and then the Anglo-Americans, these Western Apaches had raided other Indian groups and were hated by their neighbors, including the Papago Indians we now call Tohono O’odham or Desert People.

When the Spanish, and later the Mexicans and Americans, began to settle in Southern Arizona, the Western Apaches were happy to raid their ranches, mining camps, settlements, stagecoaches, and wagon trains. Raiding was how they supplemented their seasonal subsistence practices that included hunting, gathering and some farming, particularly in Aravaipa Canyon.

To be a respected Apache male, you had to be a successful raider, which meant you had to be a skilled thief and murderer. To the Apache mind, however, raiding was always morally justified. First, it was often the only logical way to keep their families from starving. And second, they could always justify their raids because the people they stole from were classified as enemies. They didn’t consider it murder to kill enemies. Of course, today, neither do we.

It’s important for us to understand that the onslaught of American and Mexican farmers, ranchers, merchants, and miners steadily displaced these Aravaipa & Pinal Apaches so that they lost their best seasonal hunting, gathering, and farming lands. The more the settlers’ very presence displaced these Apaches, the more the Apaches had to rely on raiding for survival. The invaders were not interested in understanding how they were contributing to the “Apache Problem”. They were here in Southern Arizona to make their fortunes in this “new” land. And they were not about to allow “savages” to spoil their opportunities if they could help it.

Generally, the raiding Apaches were after anything they believed would benefit themselves, particularly horses, mules, and ammunition, but also items they could trade, such as slaves, for whiskey and better weapons. They were utterly unconcerned about “The Others”. The Apaches excelled at lightening fast ambushes and seldom left their victims alive.
It took the Army a quarter of a century (1861-1886) to solve the “Apache Problem”, which they accomplished by both military force and treachery (aka lies and broken treaties). The Apache Wars, not the U.S. involvement in Afghanistan, was America’s longest war.

Anyone living in Southern Arizona and Southern New Mexico or Northern Sonora and Chihuahua Mexico who wasn’t Apache was rightly terrified of them. When confronted with a superior force, such as the U.S. Cavalry, the Apaches were adept at guerrilla warfare. From the time of the Camp Grant Massacre in 1871, it would be another 15 years before the legendary Chiricahua Apache shaman and war leader, Geronimo, would surrender for the 4th and final time. Even then, it took an astute & tenacious general named Crook, 5,000 U.S. soldiers, and several hundred Apache scouts to run him to ground.

Very few Anglos or Mexicans at the time saw themselves as invaders and the root cause of ever-escalating raiding and reprisals. John Clum, Indian Agent and later publisher/editor of the Tombstone Epitaph, was one of the few. President Ulysses S. Grant was another.

Prior to and immediately after the Civil War (1861-65), the Americans had adopted the “Mexican Policy” toward the Apaches: assimilation through marriage or extermination. To increase civilian motivation to achieve extermination, bounties were offered on Apache scalps. If you had the scalp of an Apache baby, the government would pay you $25, serious money in those days. Souvenir trophies, such as teeth beaten out of living Apache women, were popular. And worse.

However, this utterly brutal, wantonly barbaric approach to “The Apache Problem” wasn’t working out as planned. The enormous size and ruggedness of the terrain and the cunning and resilience of the Apaches were more than a match for the limited resources of the U.S. Army.
When U.S. Grant became President of the United States in 1869, he considered a better, more affordable and effective policy. For starters, he listened to many influential voices of the Eastern Establishment, including Vincent Colyer who served on the Board of Indian Commissioners.

“The peaceable relations of the Apaches with the Americans continued until the latter adopted the Mexican theory of “extermination” and by acts of inhuman treachery and cruelty made them our implacable foes: that this policy has resulted in a war which, in the last ten years, has cost us a thousand lives and over forty millions of dollars, and the country is no quieter nor the Indians any nearer extermination than they were at the time of the Gadsden Purchase [1854) … these Indians still beg for peace, and all of them can be placed on reservations and fed at an expense of less than half a million of dollars a year, without loss of life.”

Soon the President decreed what became known as the “Grant Peace Policy”. It included several key provisions, among them:

The “Grant Peace Policy” was not born of solely humanitarian considerations. It also intended to reduce the incredibly high cost of maintaining an Army in the field so far from civilization. If the Apaches were pacified and became self-sufficient, the many forts scattered about Southern Arizona would no longer be necessary. Nor would the services of those Tucson merchants and ranchers who sold food & supplies to the Army at exorbitant prices. Also, with the Apaches pacified and self-sufficient and the forts abandoned, the opportunities for rampant graft and corruption would dry up.

By the time U.S. Grant became President, top military and civilian officials understood that the Army and the Bureau of Indian Affairs in Southern Arizona were notoriously corrupt.

According to University of Arizona professor, Ian Record:

Rampant graft and corruption further hampered the limited military might that the army wielded against Apaches. Calculating politicians, scheming contractors, and underhanded Indian agents in Arizona routinely fleeced the government, depriving Apaches on peaceful terms of truce-guaranteed supplies. Often, desperately needed provisions never reached posts and feeding stations because of bureaucratic incompetence, or outright theft. Frequently, Indian agents simply sold the rations and equipment designated for Apaches and kept the proceeds. In addition, some army officers “diverted supplies to civilian merchants and pocketed the money. The same equipment and supplies sometimes were resold to the Indian Service or army quartermasters. Civilian contractors took advantage of the opportunity to reap excessive profits.” (from Big Sycamore Stands Alone)

During this time, one small Apache band after another surrendered as pressure from settlers and the Army increased and the number of warriors declined from old age, but more often death in battle. The Apache Wars were, after all, wars of attrition. Following surrender, most were sent to reservations where sickness (particularly malaria, but also smallpox), malnutrition, exposure, and hopelessness further reduced their numbers.

In 1870, in accordance with the Grant Peace Policy, General George Stoneman, the commander of the Army in the Arizona Territory, established “feeding stations” to provide rations for those Apaches who surrendered. By doing so, the Army hoped to convince all “renegade” Apaches to cease raiding and accept reservation life. Stoneman’s Apache policy, the practical application of the Grant Peace Policy, intended to give the Apaches sufficient food, farm implements, seed, agricultural training, livestock, and adequate fertile land so that in a year or two the peaceful Apaches would be self-sufficient and therefore have no reason to raid what was quickly becoming an onslaught of Anglo and Mexican settlers into Apacheria.

Soon, many Apache bands indicated a willingness to give up raiding and adopt a sedentary lifestyle in return for adequate rations, the means to become self-sufficient, and protection for civilian violence. 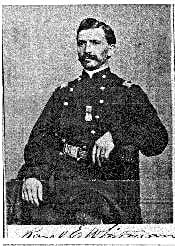 In February 1871, five old, hungry Pinal Apache women in ragged clothes came to Camp Grant looking for a son of one of the women who had been taken prisoner. The senior commander, Lt. Royal Whitman, had just arrived from the east and had not yet learned to hate all Apaches.

He fed these women, treated them kindly, and sent them off with a promise of similar treatment for others of their band if they would come to Camp Grant in peace. Word spread and other Apaches from Aravaipa and Pinal bands soon came to the post seeking rations of beef and flour. Among them was a young Apache war chief named Eskiminzin (aka Hashke’ Bahnzin) who told Lt. Whitman that he and his small band were tired of war and wanted to settle on nearby Aravaipa Creek were the ground was fertile and there was plenty of water for successful farming.

In return for rations, Chief Eskiminzin and his Apaches turned over most of their weapons to Lt. Whitman and promised to stop raiding. Whitman accepted their promise and, in addition to rations, offered them pay for field work.

As more Apache arrived, Whitman created a refuge or “rancheria” along Aravaipa Creek about a half mile east of Camp Grant, and wrote to his superior for instructions. Due to pompous bureaucratic officiousness, no reply was forthcoming.

During March, however, the flow of Aravaipa Creek declined and Lt. Whitman authorized the Arivaipa and Pinal Apaches to move five miles upstream from Camp Grant, to the mouth of Aravaipa Canyon, portions of which today are jointly owned and managed by the BLM and Nature Conservancy.

You can hike through Aravaipa Canyon today if you have a permit. The BLM limits the number of hikers to 50 per day. The canyon is about 12 miles long. As Southern Arizona hiking areas go, Aravaipa Canyon is at the top of our list of Top 10 Hikes. However, there are no trails. You actually hike in Aravaipa Creek. Watch out for bears, lions, and monsoon floods. Click on these links to our features on Aravaipa Canyon East and Aravaipa Canyon West. 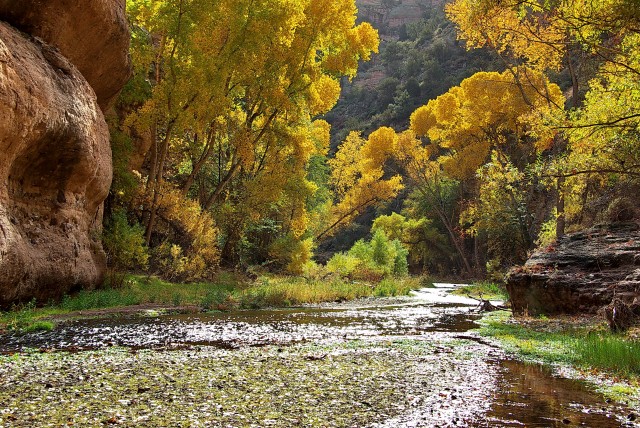 Next: The Camp Grant Massacre: Part II: The Outcome