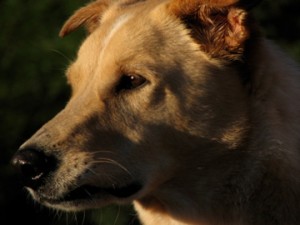 Some of you have asked about the image of a dog in our banner and the words: Devil Dog Productions LLC. That’s our dog, Buddy. And Devil Dog is our production company.

It consists of Ms. Karen, myself (Jim), two MacBookPros, two Canon Rebels and 6 lenses, an iPhone, a Samsung Android S5, and Bud. He goes by “Bud” or “Buddy” in the same way Superman goes by Clark Kent.

Bud is a very important member of our team. I’ll explain. Years ago, when we first moved here from L.A., Ms. Karen planted a substantial rose garden just beyond the kitchen window. She also planted many other kinds of plants out and about and so our yard has beautiful flowers nearly everywhere. But in the beginning, there was this little problem: rabbits.

Rabbits would get in the yard and make delicious salads out of Ms. Karen’s roses and other plants. We spent a lot of time just chasing them out. One hot July afternoon, we walked out on the main patio and saw 13 rabbits all stretched out on the grass in the shade casually munching away. Now I could empathize with Elmer Fudd and my affinity for Bugs Bunny was waning fast. Something had to be done, but what?

I matter-of-factly explained to Ms. Karen that I could shoot them. “You can’t shoot bunnies,” she exclaimed in horror. “They’re so cute.”

“We’ll get a dog,” she said. And that was the end of that discussion. Off we went to the dog pound on Silverbell Road. 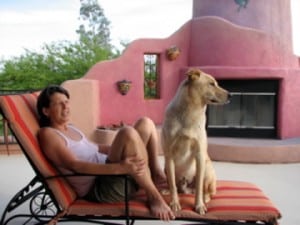 The Animal Care Shelter is a very unpleasant place, despite the heroic efforts of some of the staff and volunteers. The animals are all in cages – two or three to a cage. Cold concrete floors. Urine and feces. The smell would gag a vulture.

We had been there about an hour and looked at perhaps 60 or more dog possibilities. None seemed just right and we were discouraged. As we were about to leave I spotted one we must have overlooked. He had a yellow-blonde coat. He was thin. His eyes were sad, as if he had seen so many people pass his cage without giving him consideration that he had given up all hope of ever getting out of this awful prison.

But there was something about this particular dog that seemed special. The eyes, perhaps. We looked at his papers. Lab-Mix. Been there for almost 3 months. I motioned for the guard to put a leash on him so we could take him outside, walk around a little, and get to know each other.

The Animal Care people have a small fenced dirt area out back where you can take a dog, sit on a bench, and get acquainted. We chatted with this scrawny, dirty dog for a few minutes. He was friendly enough, but not desperately needy. He had a certain dignity that you don’t see in many canines. He was a prisoner, but he hadn’t been broken. His spirit was still strong. 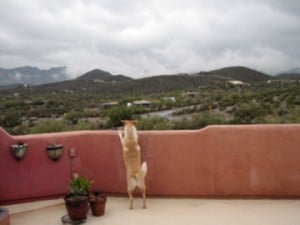 Bud: Ever On The Lookout For The Evil Coyotes

I told Ms. Karen that I think this is the one. She seemed skeptical. I said, “Let me handle the negotiations.” I got Dog’s attention. “Here’s the deal,” I said. “We’re offering two square meals a day, an occasional bone, a big yard, and a clean place to sleep. All you have to do is keep the rabbits out of our gardens. What do you say?”

Dog looked at me in disbelief. “You mean you’re going to get me outta this dump and feed me decent meals, and all I have to do is chase rabbits?”

“Bunnies,” Ms. Karen corrected. “They’re bunnies and we don’t want you to kill them or eat them or anything like that. Just keep them out of my gardens.”

“Deal,” said Dog. And he signed the contract right then and there. We took him home, gave him a much-needed bath, and fed him the first decent food he’d had in months. We named him Buddy. He didn’t seem to mind.

Several weeks passed and Buddy upheld his part of the bargain. Rabbit – I mean bunny – problem solved. But as time passed, we began to suspect that there was something different about this dog. We thought we had acquired a purebred mutt. But the regal way he carried himself, tail aloft as if a flag of defiance. His native intelligence and keen hunting instinct. That black mark on this tongue. Surely the sign of The Devil.

And finally, his howl; wild, primitive, sorrowful. When coyotes in the distance begin to howl in concert at night, Bud joins in the chorus, much to the appreciation of our neighbors, I’m sure. It’s a beautiful thing to hear at 2 AM.

All characteristics of that rarest and most magnificent breed: Genuine Sonoran Devil Dog. So rare, the AKA doesn’t even have one registered.

It wasn’t long before we were certain of our good fortune. One day Ms. Karen was working in her garden and Bud started to bark at something in the bushes a few feet away. But this wasn’t his usual bark. Bud despises coyotes (except when they’re singing in the distance). When they come up around the fence line, he gives them his most ferocious bark-growl-bark. The hair on his back stands straight up. We had become accustomed to the sound. It’s deep and full – the kind that strikes terror in little bunnies. In BunnyLand he’s known as The Great Beast.

But now he was barking at something in the bushes and the sound was high-pitched, easily distinguishable from his regular coyote bark. We went to investigate. Sure enough, a five-foot Diamondback rattler, coiled and ready to strike at Ms. Karen.

We’ve heard that “snake-bark” many times since. Sometimes it’s just Elmo, our resident gopher snake who looks almost exactly like a rattler. But, usually, it’s a rattler. The Devil Dog keeps Ms. Karen’s gardens safe from bunnies and us humans safe from rattlesnakes. For that, we have honored Bud by naming our little company after him. He doesn’t seem to mind.

Update 4/17/19. We lost our beloved Buddy in 2017. PACC, mentioned in this story, is now in a beautiful new facility and the staff and volunteers there make every effort to make the dogs comfortable and keep them sane by taking them for two walks a day and giving them some playtime. This takes a lot of volunteer effort. IF you think you would like to contribute, please contact PACC.