Military Wives in Arizona Territory is a history of women who shaped the frontier written by Jan Cleere, who specializes in writing about women of the Old West. I had read several of her articles published in the Arizona Daily Star newspaper over the past several years so I thought this would be a good read. It was.

Ms. Cleere reveals the writing of these women pioneers, often written long after they returned to the East Coast from which they originally came. The letters and articles speak to the hardships and challenges they faced in Arizona of the mid-1800s, long before there was “civilization” including air conditioning. I wondered why they went with their soldier husbands in the first place. This first excerpt says it all.

In 1868, Julia her husband, Captain Murray Davis, and six-month-old son, sailed from Oakland, CA to San Diego and from there traveled east to Yuma and then on to Fort McDowell (Phoenix). How delicate in health were Julia and her son is unrecorded except for her husband’s pleas for leave extensions to care for his family. Yet regardless of the frailty of either, Julia was determined to go with her husband and not be left behind.

“My baby was just six months old,” she recalled, “and I was, oh, such a mere girl to look at, and not nineteen: and everybody said I must stay here (Oakland) and let him go alone. So he thought too, and it was settled so. All my people were in Europe, and though I had friends in Oakland and San Francisco, I felt dreadfully lonely. I thought of my husband going down and the dangers of Indian warfare, and being killed by savages, whilst I was away, and I could not bear it.”

… “With the aid of a kind friend, I made everything ready, we were all fixed in good time, he saw me on board the steamer, and we started, nurse, baby, and I for San Diego. On Thursday morning we were at anchor, and my husband hurried on board expecting letters from me, and you may fancy his surprise when he found myself. That I was to return by the same boat, was, as I expected his immediate verdict, but that I told him was impossible. All my available funds would not carry me back, and I had everything ready for the journey.”

… “Well we started from San Diego and were soon sensible that we were getting farther and farther from civilization. Our route lay through the desert – oh such a desert – sand, white glaring sand and alkali dust all round us, not a tree, not a bush, not a green thing of any kind, and the monotony only broken by rocks, frightful hideous rocks here and there, staringly (sic) blankly at us, with nothing to hide their barren ugliness. You cannot fancy such a country.

“Every day the sun came up fierce, unclouded into the dazzling sky, and burned over our heads, and grew hotter and hotter, and the alkali sands scorched our eyes, and choked us until we gasped for breath, and the heat from the ground seemed greater even than the heat from the sun.

“Thirst – oh one does not know what thirst means until one has toiled on under such a sun, and without water for hours together.”

“There were very few springs or creeks, from one station to another, generally none where the water was drinkable, and can you fancy what it is to come on a stream beautifully clear and delicious in appearance, and find it so bitter that even the very horses turned from it with disgust.”

… “We had an alarm every now and then, but the body of troops was too large for there to be any danger, so long as ordinary precautions were attended to. We had scouts and sentinels, and were careful to keep a good look out, and no stragglers were allowed. It would not have been safe for even a small party. We knew the Indians were watching us, and we never knew when they might attack.”

… “At length one day my husband told me that our journey was drawing to a close, and that the next morning would bring us to the camp (McDowell). That night I could not sleep from the excitement, and I was picturing to myself what my future home would be through all the weary miles that intervened.

“Then came the exclamation, there it is. This is Camp McDowel (sic), we have reached our destination.” The Davises arrived at Camp McDowell on September 1, 1869, three months after they left San Diego.

“I looked in vain. I could see nothing!” Julia cried. “There were the same scorched mountains, the same uncouth rocks, the same dazzling sand, the same glare, and drought, but where was the camp, the dwellings, the home of which I had been dreaming? Those low mounds which looked like hillocks, as we drew near, where I discovered the dwellings, and to one of them I was finally conducted as my residence.

“A two room adobe hut, with mud walls, and floor, open to the thatch of brush, and without an article of furniture. This was our refuge, for this I had left civilization and comfort and security?”

Sounds like Julia Davis experienced a perfect hell in Arizona in 1869. This tale was just one of many cited by the author to describe life in Arizona Territory. These are fascinating stories, at least to me.

Not all of these letters and articles describe the hell experienced by Julia Davis. Some wives actually enjoyed their Arizona experiences. One such wife, Katherine Cockran tells us, “We did not tarry long here (Montezuas Well) for we were nearing civilization. Before many days the faint notes of the bugle came floating to our ears, and we were soon within sight of our new home. That first glimpse of the quarters, the parade ground and the flag, made Whipple Barracks seem most attractive after days of ‘roughing it.'”

“We were soon settled in our cozy (sic) quarters. Whipple Barracks was an ideal western post – a large command of infantry with headquarters and band, besides department headquarters and a busy little town only two miles [the beginnings of the town of Prescott], or, perhaps not quite so far, with many nice people who made it agreeable for the army people. There was a continuous round of gayety, luncheons, dinners, and hops, which were an agreeable change from our long quiet. The officers would meet often at our house, smoke, and discuss various subjects. The older ones often turned to the war and their many experiences. Howard (her son) was always wild to be where he could hear them.”

This latter, combined with Julia’s experience shows the contrasts. The wives’ lives depended upon which fort their soldier husbands were stationed and for how long at each one. 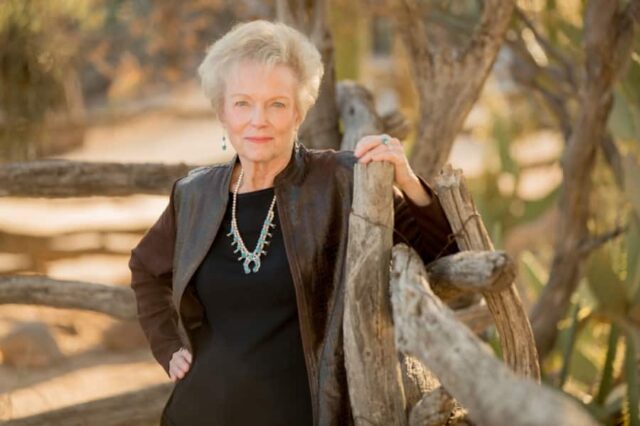 Jan Cleere has been writing about the people of the desert Southwest for over twenty years. Her books include the award-winning “Never Don’t Pay Attention:” The Life of Rodeo Photographer Louise L. Serpa; Outlaw Tales of Arizona, a National Federation of Press Women Award for best non-fiction; Amazing Girls of Arizona, an Arizona Book Publishers Glyph Award for best juvenile/young adult non-fiction. She also writes a monthly column for Tucson’s Arizona Daily Star.

I am currently reading her Levi’s & Lace: Arizona Women Who Made History. Will review it in a few weeks.

I highly recommend her books to you. You can find most of them on Amazon. Here is the link to: Military Wives in Arizona Territory by Jan Cleere.