There were many military forts in the time of the Apache Wars, none more so than Ft. Bowie, portrayed in many a western that pitted the Indians against the Cavalry. Ft. Bowie may have been the most famous in Southern Arizona but there were a dozen others, strategically placed throughout the Southern Arizona region to keep the enemy at bay or subdued. 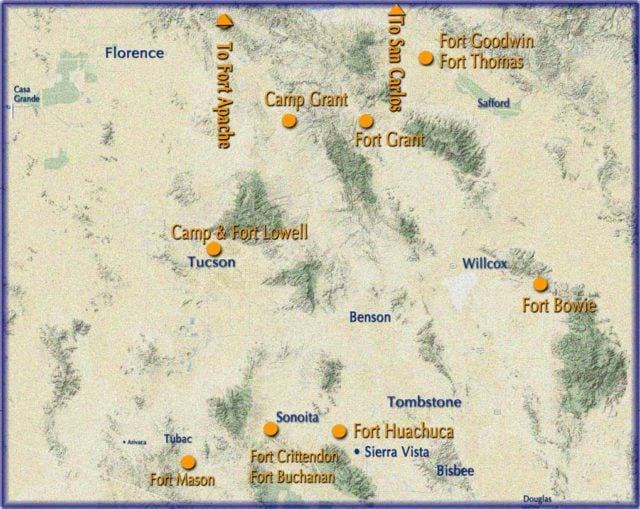 Presidio del Tucson – The first fort or fortress was a Spanish fort begun August 20th, 1775. It was a small wooden fort. This fort was fortified to adobe structures after an Apache attack in 1782 which almost destroyed it. At its largest, it encompassed over 11 acres. Today, the boundaries are marked by stones in the concrete around downtown. In 1856 the United States Military took control of the Presidio. After Geronimo’s surrender, the fort was taken apart for other uses bit by bit. Between 2001 and 2006 the NE corner was rediscovered under a parking lot and in 2007 opened as a museum. Today, we celebrate the birth of Tucson on August 20 at the new reconstruction of the fort at Washington and Court.

Camp Lowell – Camp Lowell was based at what is now Armory Park at 6th – 7th Aves. and 12th -13th St. It was established in 1866. The City Park honors veterans of several wars. It is a popular park for children and seniors alike. 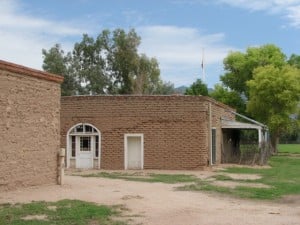 Fort Lowell – Camp Lowell was moved outside of town in 1873 and what is now Ft. Lowell and Craycroft. As an active fort, it served as a hospital and supply depot during the Apache Wars. It operated until 1891, 5 years after Geronimo’s surrender. Until Covid, the site was part of the Arizona Historical Society. Stewardship has been passed to the Presidio del Tucson, whose people are trying to bring it back. Ft. Lowell is an indoor/outdoor museum with ruins as well as a park for baseball, old-time, and otherwise as well as a soccer field.

Ft. Buchanan was built in 1856. It was originally Camp Moore. In 1861 most of the troops left to fight the Civil War, leaving the fort vulnerable. In 1865 two surveyors, Gilbert Hopkins and William Wrightson were attacked by Chiricahua Apaches as they were headed to the fort. Word is that they almost made it. The battle for the fort was lost. It was the only fort captured by Apaches. Later, the two highest peaks in the Santa Rita Mountains were named after these men, Hopkins and Wrightson. It was located 1/2 mile southwest of Camp Crittendon. 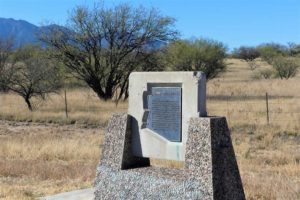 Fort Crittendon – Originally Camp Crittenden, this fort was established in 1867 three miles from Sonoita on nearby Sonoita creek after Fort Buchanan was lost to the Apaches.
The fort was named for Colonel Thomas L. Crittenden, commander of the XXI Corps at Chickamauga during the American Civil War. The fort was abandoned on June 1, 1873. Deteriorating adobe walls, and a memorial sign commemorating the fort remain. The fort is now located on private property. Check out the map here.

Fort Huachuca – Camp Huachuca was established in 1877. It was declared a Fort in 1882. General Nelson A. Miles used it as his headquarters in the fight against Geronimo in 1886. After Geronimo’s surrender, the Fort continued as a strategic border position. In 1913, it became the base for the Buffalo Soldiers 10th Cavalry. Eventually, Fort Huachuca became the US Army Intelligence Center and home of the 111th Military Intelligence Brigade. There are two wonderful museums on these grounds, one historical and one regarding Military Intelligence. And the Military Cemetery is full of well-documented history. There are signs to enlighten you along the way.

Fort Mason was located on the site of Mission Calabasas near present-day Tumacacori. The name changed to Camp McKee. After

Camp Grant aka. Fort Breckinridge, Fort Stanford, Fort Aravaipa was at the junction of Arivaipa and San Pedro rivers. The village of the Aravaipa Apaches who were under the protection of the U.S. Army was 6 miles upstream from Camp Grant. This was the site of the Camp Grant Massacre. There is nothing left of this fort. It was approximately where the school is today on the road to Aravaipa Canyon.

Fort Grant was built after Camp Grant was abandoned in 1872. It was built at the southern foot of Mount Graham. This fort is now a prison for juveniles. 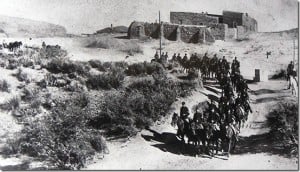 Fort Bowie is located at Apache Pass, near Apache Springs, in the foothills of the Chiricahua Mountains. It remains today as a National Historic Site. Park your car above the site and walk a mile and a half down to the ruins past the old post cemetery and a reproduction of an Indian village. Alternatively, there is a handicap only entrance if you continue about 2 miles and turn right into a badly marked road. There is a gate. You should call ahead to let someone know you are coming and need assistance. It is NOT for the able-bodied. Park and the top of the hit and take the trail. you will be glad you did.

Fort Thomas, Safford County. Now the unincorporated town of Fort Thomas, it was an active fort between 1876 and 1791.

Fort Goodwin, was on the Gila River in Pima County northwest of Safford on State Route 70 toward San Carlos, between Forts Thomas and Bylas. Started by volunteers in 1864, it was later downgraded to a Camp. Nothing remains of it but a marker.

The San Carlos Indian Reservation is still active today. It was established in 1872 as a reservation for Apaches rounded up from their homeland. Conditions there were deplorable. Hundreds of Apaches died of Smallpox. Today the San Carlos Apaches have a Chamber of Commerce, Cultural Center and run the Apache Gold and Apache Sky Casinos.

Fort Apache, previously Ft. Ord, Fort Thomas, Camp Thomas, Camp Mogollon, now Fort Apache. This fort now belongs to the White Mountain Apache Tribe. Take a rare look into the Apache way of life from their eyes by visiting the museum. The Apaches tend to save their history through passing down stories rather than writing.

There are a host of other Camps, Forts, Infantry and Supply Depots, most of which are just notations in some Historical Record somewhere. Some of the ones above are also just memories, but there is something that can actually be said about them. Oh, If you are wondering what the difference is between a Fort and a Camp, it is usually how permanent the structure is. Some started out as Camps and were upgraded to Forts, or from Fort to Camp before they were abandoned.

Here are a couple of resources, that have more names of forts, some of which only the record exists.
• Legends of America
• North American Forts
• Arizona History and Geneology Project
And, of course, Wikipedia.