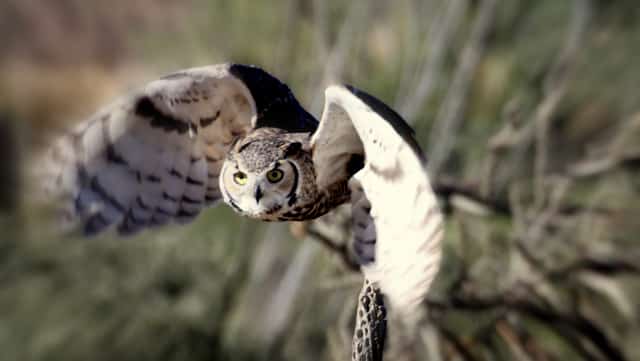 For those of you who are new to Tucson and have never been to the Arizona-Sonora Desert Museum, it is one of Tucson’s most treasured attractions. The Desert Museum was founded in 1952, and 2022 will be its 70th year. It is zoo, aquarium, terrarium, botanical garden, art museum, and more.

In Mid-January 2022, our youngest two daughters, and two of our grandchildren visited us here in Tucson. We took them to the Desert Museum while their mother and aunt stayed in our casita quarantined for exposure to COVID-19.

We had mainly come for the Raptor Free Flight program to watch the birds fly so close you could feel the breeze from their wings. Except for the owl, of course. Owls fly silent. As of this writing, the raptor free flight program runs 6 days a week, at 10 AM every day but Wednesday. Check with the museum before going. 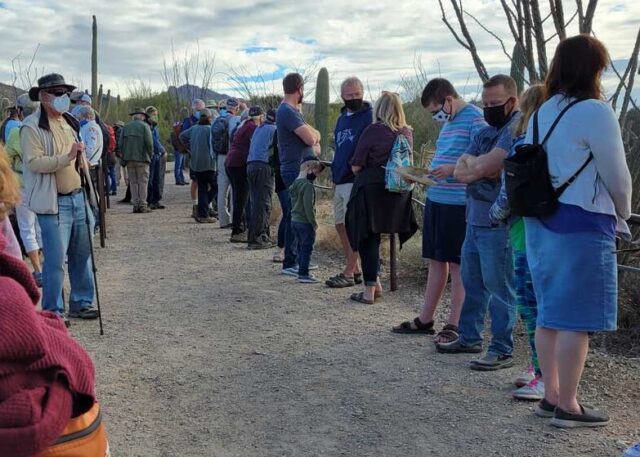 Since the first and only show this year is at 10 am, we had to arrive early and hurry down to the Free Flight program. If you have grandchildren, you know it is like herding cats, even in their late 20’s. Once there, give yourself a 1/2 hour to get down to the arena. As you can see, it is still a popular program and, at this time, masks are expected, and I believe required.

At this show were the great horned owl, Harris’s hawks, a caracara, and a couple of ravens soaring in the sky above. It had been several years since Ms. Karen and I had been to the Desert Museum, but it was still a thrill to watch the birds and try to get some decent pictures. 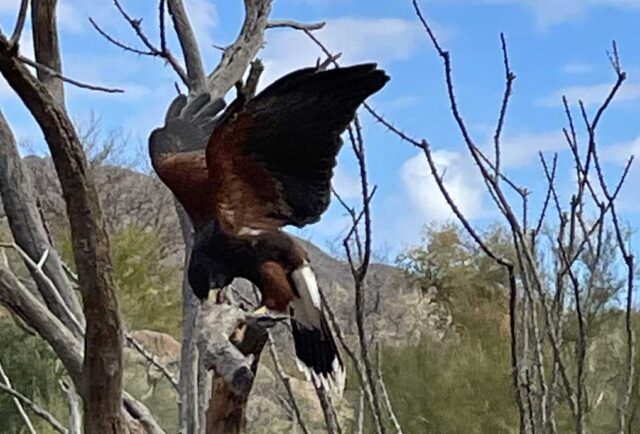 Harris’s Hawk in a tree.

Harris’s Hawks, yes, Harris’s Hawk, not Harris Hawk, hunt in packs, much like wolves. The females are larger than the males and dominate the pack. This means after a kill, the females dine first. Here are a few more pics of our experience. All this information and more are presented at the shows. 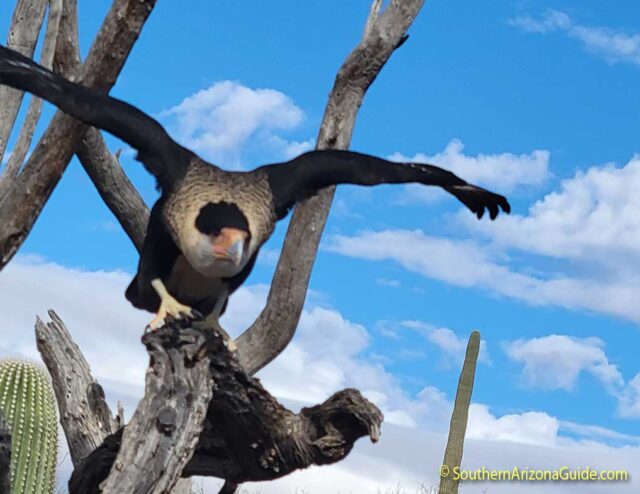 Although it looks like a long-legged hawk the Crested Caracara is actually a falcon. It is the only falcon that collects material to build a nest. Other falcons lay their eggs in an old nest built by another species or in an indentation on the ground.

After the Raptor Free Flight, we toured the grounds and saw many other animals, including Cruz, the resident Mountain Lion, the Big Horn Sheep, an Otter, and various other critters, including the largest jackrabbit we had ever seen. Sadly, the aged grandsire of the Big Horn Sheep had to take his final rest a couple of weeks ago. Live Free and prosper, old fella. You were loved. 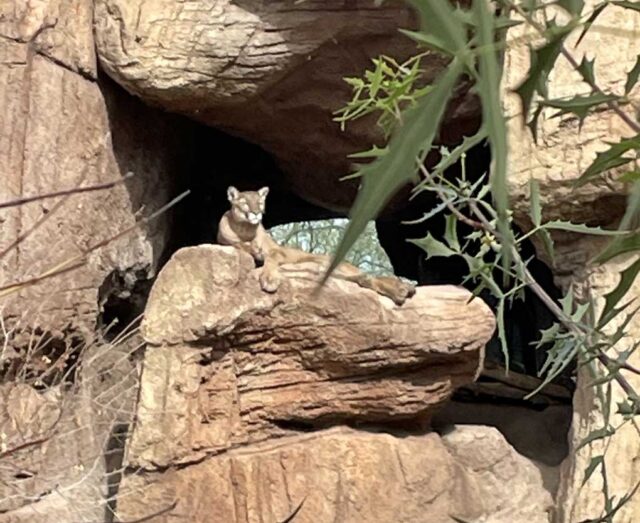 The last time we were there, some 4+ years ago, the resident lion, Cruz, was fairly new to the Mountain Lion habitat. We missed the loud Sargeants Parrots which used to be caged nearby. They were no longer there. 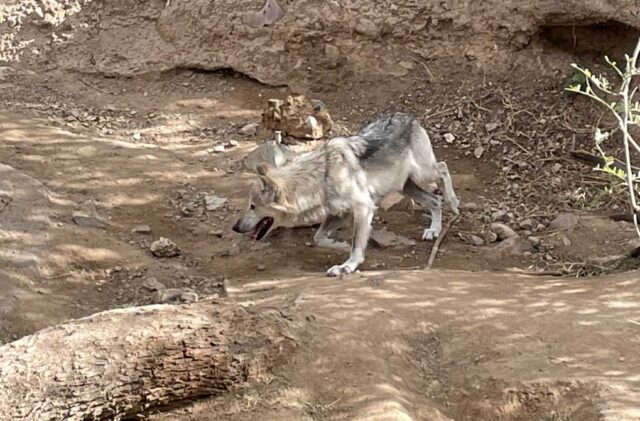 Los Lobos, the Mexican wolves, of which we saw two, were frantically pacing around. We suppose they were getting their morning exercise. Either that or they were agitated about something. These animals are endangered. A 2021 census showed that there are now only 186 Mexican gray wolves in the American Southwest, with about 72 wolves in Arizona and 114 in New Mexico. 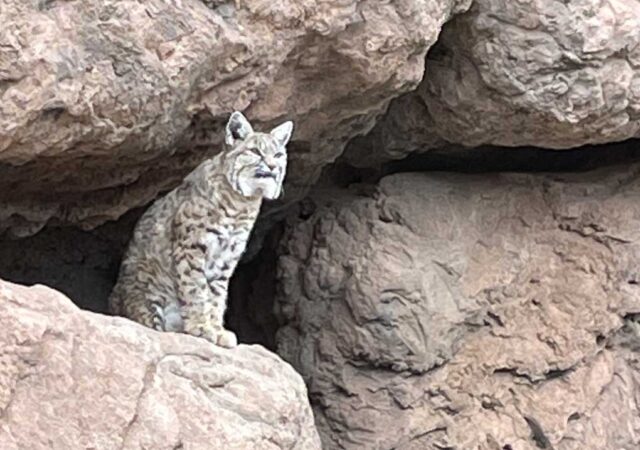 There are other new critters in the Desert Museum. We have not seen the fox that is in Cat Canyon before. This one does not sit around all day on the ledge like the other. Take a fresh look. You can get a good discount at the Southern Arizona Attractions Alliance. Buy the Passport. It will pay you back. The printed version will be available later this month, assuredly at the Visitor & Heritage Center.

A Docent talks about the Saguaro and other videos.

A Half-Day Trip to the Desert Museum.

OR go straight to the source.

It typically takes at least two hours to see all that the Museum has to offer. I don’t think we have ever left in under 3 hours. There is just so much to see there.