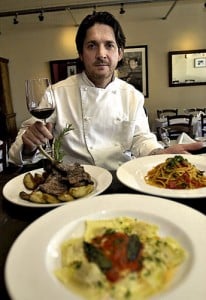 I “discovered” Tavolino Ristorante Italiano only because I am a member of the CVB (Metropolitan Tucson Convention & Visitors Bureau). I am constantly amazed at how much our CVB folks do for our local economy and how few locals know about their efforts that attract hundreds of millions of convention & visitor dollars to our markets every year; all of which translate into jobs, jobs, & more jobs.

Along with my invitation to the CVB mixer held at Tavolino recently, I received a $10 off coupon for a meal at said establishment. As a reviewer, I won’t compromise my assessments, but I will resort to Groupons and other discounts because dining reviews are by far the most expensive thing I do for SouthernArizonaGuide.com.

Thus it was that I came to lunch at Tavolino for the first time in late February 2013. Admittedly, I arrived with some trepidation because the reviews on sites such as TripAdvisor, Urban Spoon, and Yelp, were all over the place. Some customers reported terrible food and service. Others claim Tavolino’s is the best Italian in Tucson. (Given our 5-Saguaro rating of Vivace, that would be quite a stretch.) Read More

My reviews seldom mirror the opinions of others, in part I suppose, because I tend to be more discerning (picky) and at the ripe old age of 69, I’ve simply had a lot more experiences than the mostly young adults who write for the these huge review sites.

Chef Massimo Tenino describes his Tavolino as “an inviting restaurant that feels like an Italian neighborhood trattoria. Tavolino specializes in simple, elegant food, including fresh salads, homemade pastas, succulent roast and grilled meats, rotisserie chicken and game, and luscious desserts. Tavolino brings Italy to life in Tucson.” Thus far, I have no argument with his self-description, but I will have to return a few more times and try some other dishes.

Carrie was my server and she turned out to be a very good one. I was well taken care of. I ordered a small Caesar salad, which came with “fresh” bread. When it reads “fresh” bread on a menu, I have come to assume that they mean it was baked sometime in the past week.

My Caesar arrived. First taste … excellent! This was VERY Italian and much appreciated. Right behind my salad came the so-called “fresh” bread. Only this time the bread really was hot-right-out-of-oven. It was a light Italian bread (not like heavy pizza dough you might get elsewhere) served with a small bowl of very fine olive oil.

I ordered the Chef’s special of the day. Turned out to be a delicious pasta dish with terrific Italian sausage, seasoned with fresh herbs and topped with very tasty feta cheese. Superb! As fine a pasta dish as I have ever had. Great Caesar, wonderful fresh bread, and now, this totally awesome pasta dish. WOW!

If I had not had the $10 discount card, my lunch would have been about $19. And I had no wine, only iced tea w/lemon, my drink of choice for lunch. The portions were so generous, I brought back almost half of my meal to Ms. Karen, who enjoyed it as well. Two really good meals for 20 bucks … not bad. 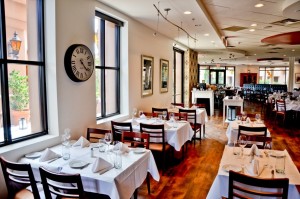 The ambiance is pleasantly modern. They have a full bar and a nice patio, but it was too cold to dine outside when I was there. Would be great for a warm summer’s evening. I arrived, as is my habit, at 11:30 AM to avoid a crowd. But I imagine on Friday & Saturday night Tavolino could get really noisy because there is nothing to dampen the sound of 150 people all talking at once.

I’m not discounting all the reviews I read that dis’ed the place, but my Tavolino dining experience was very good. That rates them 4-Saguaros and an honored place on our List of the Best Restaurants in Southern Arizona by category. I will be back for dinner with companions to sample more dishes. I suspect that Tavolino could join the only 9 other Southern Arizona restaurants that have our 5-Saguaros rating – The Best Of The Best.

For special events, Tavolino has a private dining area.