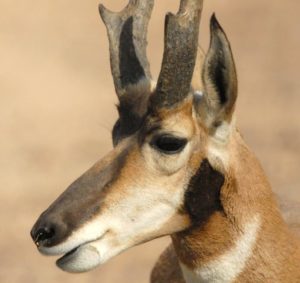 The Northwestern region of the Sonoran Desert, near Ajo, AZ and northern Sonora, Mexico, is the only place in the world where wild populations of Sonoran Pronghorn exist. They have been brought back from the brink of extinction through the captive breeding recovery program and dedicated team at Cabeza Prieta National Wildlife Refuge (Cabeza Prieta NWR) in Ajo.

Often mistakenly referred to as antelope, pronghorn are the only remaining members of the Antilocapridae family that roamed the earth some 15 million years ago. Sonoran Pronghorn are one of four subspecies and are perfectly adapted to life in the extreme conditions of the Sonoran Desert. Due to their shy nature, they are not likely to be seen along roadways but they are distinctive from their prairie grass cousins, smaller and lighter in color.

Once as widely distributed as bison, by 2002 only 21 animals remained in the wild. At last count (2016), the population stands at about 1350 animals. The primary captive breeding herd is located at Cabeza Prieta NWR with about 80 animals. Usually, two bucks, one dominant and one secondary, for every ten females. Captive does typically deliver twin fawns each year.

But if you visit, don’t expect to see them. The animals are wary, circumspect of human activity and prone to flight. For their own safety, the herds are kept restricted and even recovery staff have limited access, mostly observing them from a nearby ridge top. 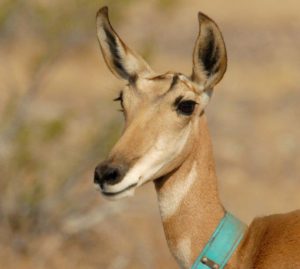 Pronghorn are the fastest land mammals in North America reaching speeds up to 60 mph and the stamina to maintain a speed of 35 mph for several miles. Natural predators include mountain lions, bobcats, and coyotes but the greatest threat is from the harsh environment itself.

The Cabeza Prieta NWR recovery program depends upon volunteers to support its annual capture and release program, from the construction of capture funnel pens to assisting with vet checks. Volunteers are essential. For more information about visiting the refuge or recovery program volunteer opportunities, go to: https://www.fws.gov/refuge/cabeza_prieta/

If You Go, Where To Stay?

While the town of Ajo cannot boast any four or five star resorts, it does offer a selection of modest motels, RV and camping facilities. La Siesta Motel, two miles north of town on Hwy 85 is family and pet friendly. Don’t let its 1970s strip motel exterior fool you. The staff is welcoming and the rooms are clean, comfortable and road-traveler-equipped with microwaves and mini-refrigerators.

Behind the main building rests a collection of quaint rental cabins and an RV park with trees! Unlike many roadside RV parks this one actually feels like a park! Amenities include in-room coffee, free WiFi, garden, tennis court, activity room with table tennis, and laundry facilities. The motel’s swimming pool and spa are tucked within a lush, tropical desert oasis. Within its embrace, the frantic pace of the multi-tasking, technology-driven 21st century vanishes into the tranquility of a raspberry-hued desert sunset. Prices are family friendly too.

Editor's Note: We are fond of the Sonoran Desert Inn and Conference Center in Ajo. Social distancing there is easy. If you want a chance to see pronghorn closer to Tucson, take a drive to Sonoita and keep an eye out in the grasslands. They hang out early and late in the day.  You can read more about Ajo here.