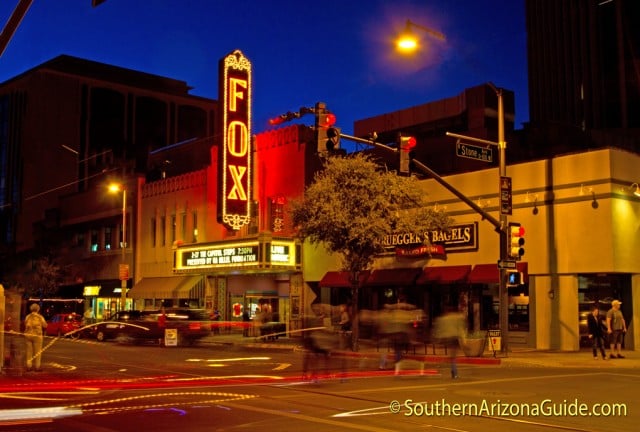 On a beautiful Friday evening just before Christmas (2011), Ms. Karen, Ms. Sue, and I went out to dinner at Caffe’ Milano adjacent to the restored Fox Theater in downtown Tucson. Both would be a new experience for us. One of the attractions was going to be the theater itself in all its historically glorious Southwestern Art Deco motif. (More on the Fox in a moment)

The central purpose of our evening was to see Aaron Neville one of our favorite singers, perform. (More on the performance in a moment.)
Oldies, Goodies, & Low Expectations
Ms. Karen and Ms. Sue have delighted in Aaron Neville’s musical arrangements, poetic, storytelling lyrics, and that magnificent voice, going back to 1966 with his first hit record, Tell It Like It Is. (Are we really that old?) 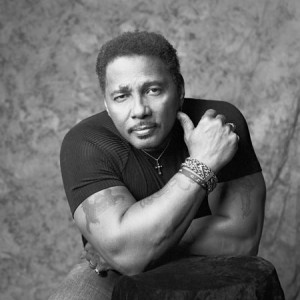 Ms. Karen & I went to see Aaron perform in Baltimore (MD) maybe 14 or 15 years ago, and he was terrific; a powerful, dynamic performance to say the very least. At the end, Aaron was still going strong and we were emotionally drained, but still wanting more.

However, I know well the toll the years take on all of us and I thoroughly expected an abbreviated, less energetic performance now. After all, the man is 70-years-old. But I knew the women would still enjoy his music and that was my Christmas present to both. Great presents don’t have to come wrapped under the Christmas tree.

Caffe’ Milano (2021 – Caffé Milano has closed its doors for good)

We arrived at Caffe’ (Note the 2-F’s. That’s how you tell it’s Italian.) Milano about five minutes after their 5:30 PM opening and were seated immediately. (Jim’s Rule: either go early or go late.) Once seated and having ordered our vino, fresh-baked bread arrived (delicious) and we had a chance to look around. 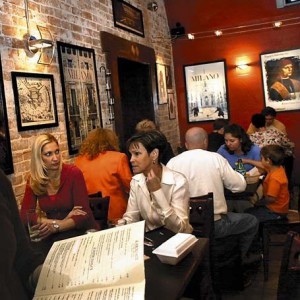 It was a smallish space with high ceilings, subdued colors, and interesting framed photographs of the Italian Alps on one wall. It reminded me of a New York Italian restaurante’, perhaps in SoHo or Brooklyn. But like so many great Manhattan dining establishments that are located only a block or two from some of the best theater in the world, Caffe’ Milano was a 30 second walk to, what turned out to be, one of the finest theaters in Southern Arizona. Prime location! But what about the food & wine?

One of the reasons it reminded me of a New York City restaurant was its too-small, too-close-together-for-comfort, tables. There just isn’t ever enough room for water glasses, wine glasses, bread plates, butter plates, salad plates, and, finally, dinner plates. And I don’t particularly care to have the good folks at adjacent tables seated almost in my lap. I always feel cramped and slightly uncomfortable in places like this. But, hey, this is the downtown of a major metropolitan city. It’s exciting. Who am I to complain?

The other reason Caffe’ Milano reminded me of a New York Italian restaurante’ is the fine quality of the meal and the impersonal, but efficient service. 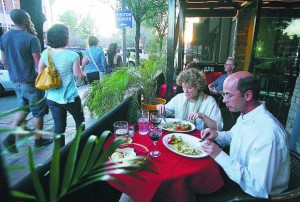 Dinner arrived in due time. Ms. Karen had ordered the ORECCHIETTE AI QUATTRO FORMAGGI; which is? Italian for gorgonzola, taleggio, raclette, parmesan cheese and cream finished with cognac and topped with fresh spinach.

Carnivore that I am, I ordered the SCALOPPINE DI VITELLO AL MARSALA E FUNGHI PORCINI: veal scaloppine with porcini mushrooms sauteed in a Marsala cream sauce.

The prerequisites for dining with me when I am doing a review are (1) everyone must order something different than the others and, (2) everyone must taste what the others have ordered and give me their impressions. (I warned you this one is complicated.)

In short, table size & indistinguishable red wine aside, Caffe’ Milano is a winner. Excellent food, and, if you’re going to an event at the Fox, it’s a dining perfect location. We said our “arrivederci’s” and walked the 24.3 paces to the Fox Theatre to see Brother Aaron.

Just walking into the lobby, I looked around. It wasn’t what I was expecting. The lobby is very plain, sorta beige and not much else. Having just eaten, we all had to use the facilities prior to being seated. I suppose it shouldn’t have come as a surprise that the restrooms are way too small for theater crowds. It was later explained to me that, given that the Fox is on the National Register of Historic Places, they were not permitted to modify the building to accommodate a modern bar & restrooms.
Moving on, we found our way past various vendors selling drinks, popcorn and I’m not sure what else. Most were just set up at small tables that took up what little room the lobby has. 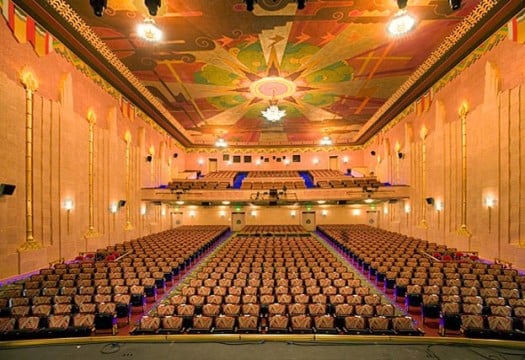 We were ushered to our seats, sat down, and started to look around the theater’s grand concert hall. Suddenly, I had been transported to another time and place. Here we were, in a 1930’s movie palace, the first building in Tucson to get air conditioning. They don’t make theaters like this anymore. During the Depression, my grandmother would have taken her young son, my father, to a theater like this and paid a dime for her ticket and a nickel for her son. And they would have been treated to a newsreel, then a double feature.

Over the decades, its glory days had passed as patrons and merchants moved out of downtown and into the new subdivisions in the foothills. The Fox fell into disrepair and seedy use. Sad.

But we can now be ever-so-grateful for the Fox Foundation and its many donors who spent years raising the funds and supervising the magnificent restoration we experienced that night. One thing had not changed over the years. As we were about to find out, because of the original building material, the Fox has almost perfect acoustics. 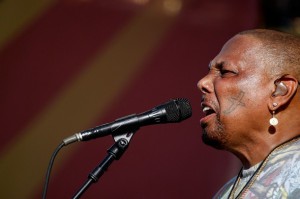 The Aaron Neville Quintet assembled on stage to perform their Christmas tour. Together they made music like no other. Pop, soul, R&B, country, gospel, and, of course, a couple of Christmas carols. O’ Holy Night has always been my favorite of the season and midway through the evening, Aaron sang it for us as only he could. I long ago gave up believing in fairy tales, but this and a few others can bring me to tears.

For more than 50 years, Aaron Neville has used his unique vocal range and idiosyncratic modulations – from his occasional near-yodel to the soaring childlike, almost angelic falsetto, to his darker, soul-searching, angst-driven tenor, blended seamlessly to enrich our lives by taking us musically from the depth of despair and longing to the heights of hope and promise.

With his quintet, Aaron was surrounded with superb talent: a great drummer (No, I mean stunningly good.), two extraordinary guitarists, and, unbelievably, his 73-years-old older brother Charles on sax. And all proved to be fine backup vocalists as well. What talent!

I wasn’t expecting much, mostly a trip down memory lane with hits like Everybody Plays The Fool (1972); Don’t Know Much (1989); Don’t Take Away My Heaven (1991). And I was sure Aaron would have lost some vocal power and range since we last saw him perform. And I certainly didn’t expect much from the ancient saxophonist, Brother Charlie. Charlie was once one of the best horn-men alive, but I was sure the years would render his part of the performance slow, melodic, and short. Certainly, Aaron was just carrying the old man out of family loyalty.

WRONG!!! These five master musicians put on a toe-tapping, foot-stomping, upbeat, hand-clapping, jumping-out-of-your-seat raucous good time. Their energy and love for their music were immediately transmitted to the audience and by the end of the first song, we all knew we were in for a high-voltage performance. Charlie wailed on his sax, not only as somber, subdued backup to Aaron’s powerful, soaring vocals, but on a couple of occasions, Charlie also let loose with solo performances of his own that brought the house down. He showed us all why he’s still the master sax.

After finishing several old R&B and Adult Contemporary favorites, the band grew quiet. Aaron stepped a little closer to the audience, which at this point had no idea what to expect. He sang two or three notes, no words. Only a few in the audience seemed to understand where he was about to take us. Aaron hesitated, then whispered into his microphone, “I know, what a surprise.”

And then the sacred words began to flow, carried only by the richness of his solo tenor voice and soaring falsetto: the Ave Maria. When he had finished I think the audience didn’t know whether to give him a standing ovation or get down on their knees and weep.

Aaron Neville has publicly credited St. Jude with “saving him from heroin addiction, chronic depression and 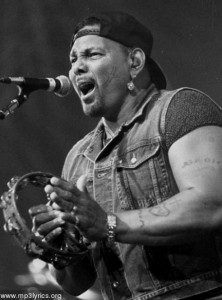 ”slavery-style contracts.” He is neither a preacher nor a faith healer, only a singer. But through his music over the decades he has become a source of inspiration for others in despair.

Aaron is deeply religious and that is how he thinks of his music and the talent God gave him. “I describe it as God in me touching God in the person that hears it; at least that’s what it feels like to me,” he tells us.

If you ever get the opportunity to experience an Aaron Neville performance, go for it. If you haven’t been to the newly restored Fox Theater, find any excuse and go. And if you want a delightful evening of dining and theater-like New York City, I highly recommend Caffe’ Milano. It’s hard for me to imagine a better evening where you can enjoy good food, good performances, good friends, and at the same time witness the transformation of downtown Tucson.

Editor’s Note 2020: Charlie has now passed on. We saw Aaron again at the Fox last year. His voice is aging. Remember Aaron and Linda Ronstadt singing “I Don’t Know Much”? What great memories he brings.

For Dining reviews of the Best Dining in Southern Arizona visit us here.