October 19, 2013 Every October, the dedicated Park Rangers at Mission Tumacacori National Historical Park and the volunteers & staff at El Presidio de Tubac, the first Arizona State Park, put on one fine reenactment of the Juan Batista de Anza Expedition: known today at Anza Day.
In 1775, when America’s founders were busy plotting independence from England on the eastern seaboard of North America, a relatively unknown Spaniard led about 240 immigrants and a thousand head of stock on a 1200 mile journey from the mission at Tumacacori in Southern Arizona to a little-known natural bay in Northern California. It was an audacious, some say ludicrous, venture. Amazingly, all of the immigrants survived what had to be one of the most difficult migrations in history.
In 1776, they established El Presidio Real de San Francisco; aka The Royal Fortress of Saint Francis. A Catholic mission soon followed, as did a little village they called San Francisco.
Today you can hike the 4.5 mile trail that leads from Tumacacori to Tubac. It is an easy, pleasant hike. 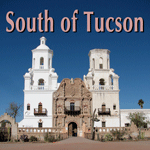