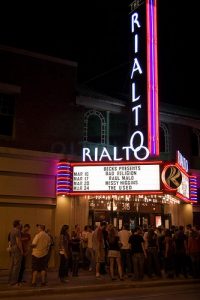 Tucson’s Historic Rialto Theatre and its sister, the Fox Theatre at the other end of Downtown’s Entertainment District, are Tucson gems. We are delighted that caring people with civic foresight were able to save and restore these two historic entertainment venues.

Let us not forget the third one. The venerable Temple of Music and Art continues to host some of the best live performances in Southern Arizona. We have written about the Fox and Temple, but this is our first feature about the Rialto.

The Days When Movies Needed A Pipe Organ

It also showed silent movies accompanied by a grand Kilgen Pipe Organ for mood and sound effects. This fine organ, originally acquired for $7,500 (about $90,000 today), was later shipped to a theater in Yuma.

The End of Silent Movies & Vaudeville

The age of “talkies” or “sound on film” full length features became a global standard for movie-making by the early 1930’s and theater owners heavily promoted this amazing new technology. In 1930, the Rialto added to its marquee, “Our Screen Talks”. Consider this: we now have a generation that has no idea that once upon a time all movies were silent. 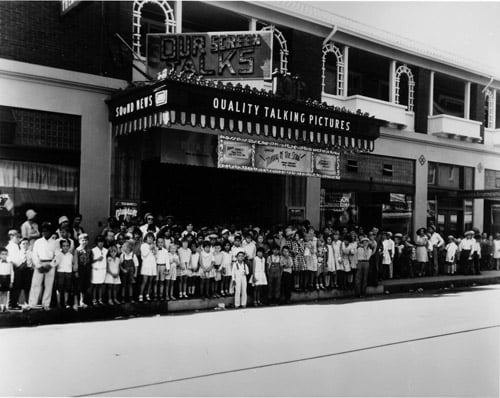 Note the words above the horizontal marquee: OUR SCREEN TALKS.

The original King Kong debuted in 1933. Kids today generally find these old talkies dull, stilted, and uninteresting. However, my father, then 13, told me he and a friend saw King Kong when it first debuted in San Bernardino CA and thought it was terrifying. 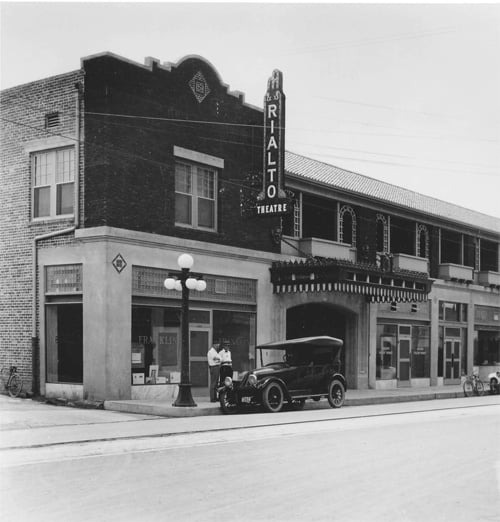 What Does “Rialto” Mean?

The Rialto Tucson was not the only Rialto Theatre. There was one in Phoenix, and many others around the United States and Europe. The term “rialto” comes from a medieval covered bridge in Venice Italy. Cheap entertainment establishments grew up around this old bridge and catered to the common man who could not afford the posh theaters and operas frequented by the wealthy.

The Era Of The Big Hollywood Studios

In 1948, Paramount acquired the Rialto and the marquee changed to reflect new ownership. Paramount invested heavily in improvements to the Rialto. It added new plush seating, repainted the interior (including the gaudy murals, remnants of which are still visible despite being painted over), and added swamp cooling, a new and comparatively rare treat in the scorching Sonoran Desert. Tucsonans could now go to the theater in the summer just to get some relief. The Rialto was now the Paramount and would be so for the next 15 years.

But times change. Downtown Tucson residents moved to the suburbs. Downtown merchants followed them. Paramount theatre was not showing first-run features. Some claimed that the theater was at the wrong end of a one-way street (Congress Street). Ticket sales continued to decline. Whatever the cause, in 1963, the Paramount Theater closed, laying off 16 employees. 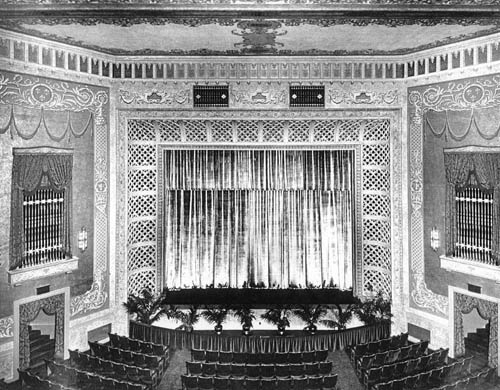 In 1978, another group again tried making El Cine Plaza a successful Spanish-language theatre. This time without direct competition, they were more successful. At least until January 7, 1984. That was the day the building blew up. That’s right! Just after the 6:30 screening started, the boiler under the stage exploded. The concussion was felt blocks away. The stage collapsed and the building so damaged that both the City building inspector and the fire captain declared that it would have to be torn down. Amazingly, it wasn’t. Fortunately there were few injuries and no deaths, but that was the end of El Cine Plaza.

A real estate mogul bought the building with the intent to tear it down and build a parking structure for a new high-rise complex at the East end of Congress Street. Two local guys put a stop to it … Paul Bear and Jeb Schoonover, both radio entrepreneurs and concert promoters. Somehow, with very limited resources, they acquired the property and began making repairs to the damage caused by the boiler explosion and years of neglect. They re-opened the Rialto Theatre in 1996. It was they who re-hung one of the original Rialto marquees. 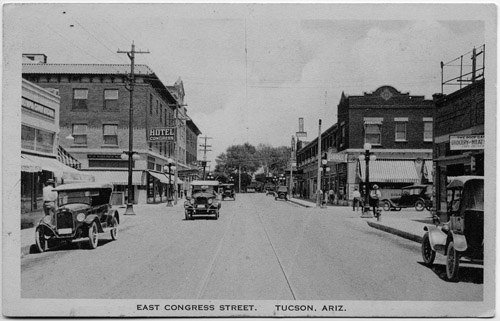 Congress Street ca. 1920. Looking east, you can see Hotel Congress on the left and the new Riato Theatre across the street. Congress was then a two way street with streetcar tracks. Seen here Hotel Congress was originally a 3-story structure. The top floor was destroyed by fire in 1934. The fire resulted in the capture of John Dillinger and his gang of Mid-West bank robbers. The last Tucson streetcar traveled these tracks on New Year’s Eve 1930. Buses were Tucson’s only public transportation until our Modern Streetcars that began service in July 2014.

The modern Rialto era began in 2002 when former Tucson Weekly publisher Doug Biggers, with his partnership Congress Street Investors, purchased all of the Rialto block, except the Theatre itself, which remained in Bear and Schoonover’s hands until the summer of 2004.

Biggers ultimately negotiated a deal in which the city of Tucson, under the auspices of the Rio Nuevo revitalization project, purchased the Theatre and allocated funds for more extensive renovation. In turn he leased it to Biggers’ Rialto Theatre Foundation that continues to operate the Theatre under current (2016) Executive Director Curtis McCrary and a strong Board of Directors.

In 2015, they purchased the Theatre from the Rio Nuevo District, the downtown development authority that had owned the Theatre since 2004. The Rialto Theatre Foundation is currently seeking community support to launch a major capital project that would make significant renovations and improvements to the Theatre. 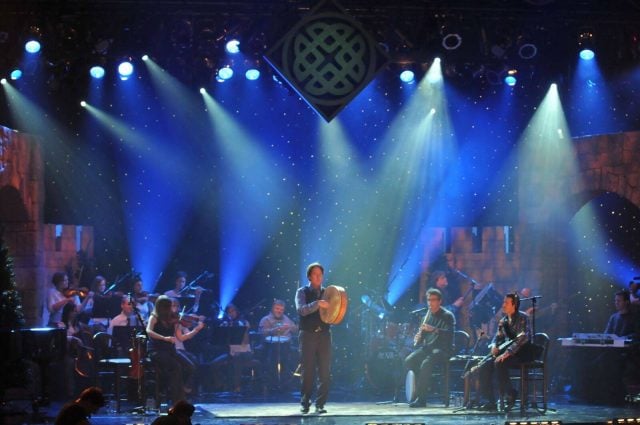 Next year, 2020, the Rialto Theatre will celebrate its 100th anniversary. Now it hosts 200 events and draws over 100,000 patrons annually. The Rialto Theater has gone from success to skid row and back to success in only 90-some years. What a story!

Watch this 2015 video pictorial presentation of the history of the Historic Rialto Theatre, presented by an Idle Engine/Rialto Theatre Foundation.