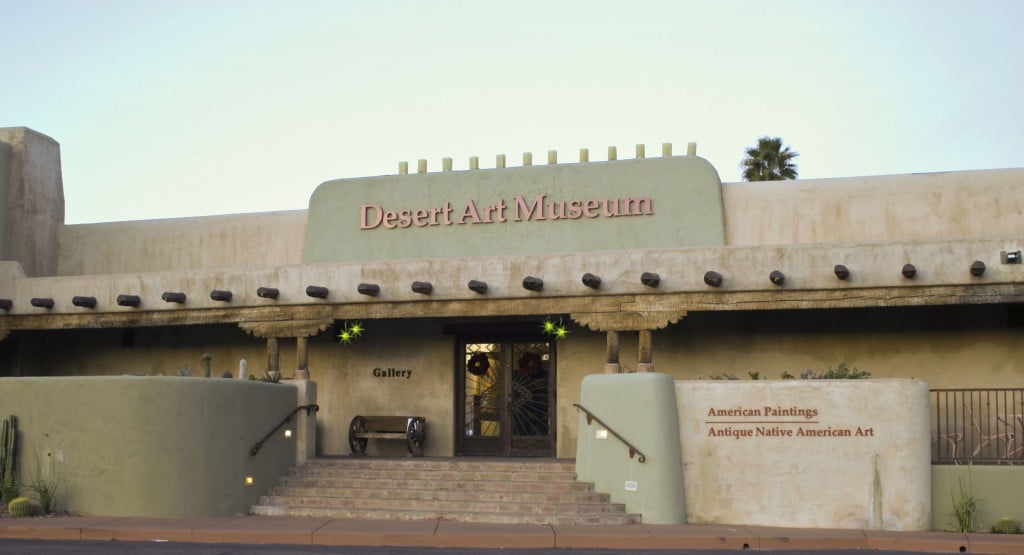 Tucson Desert Art Museum, which includes Four Corners Gallery, tells the extraordinary history of the Desert Southwest through the eyes and talent of its finest artists and artisans, including Maynard Dixon, Thomas Moran, & Albert Bierstadt, to name just a few.

When I went to photograph some of the exhibits, I took Neighbor Roy as I usually do to help with photo & video shoots. I particularly appreciate fine artwork representing my beloved Southwest. But compared to Roy, I’m just a casual observer and occasional patron. Roy, however, has been a serious collector of fine Native American rugs, baskets, kachinas, and other historically important artifacts for over 40 years. I was in awe of the Desert Art Museum’s exhibits. Roy was blown away! 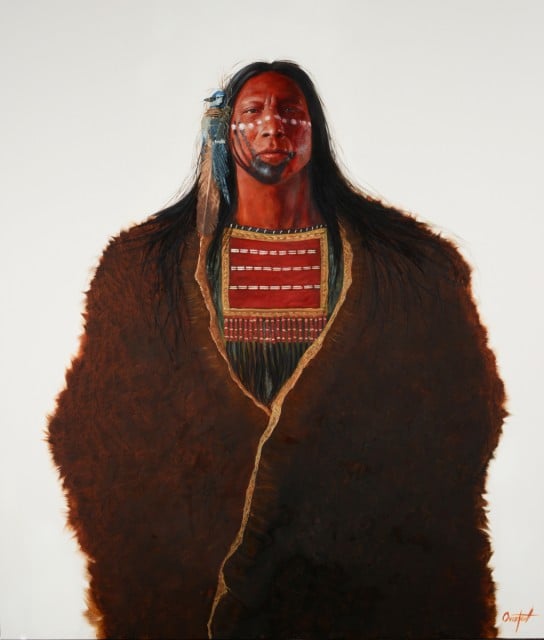 Touch the Clouds (c. 1838 – September 5, 1905) was a Sioux chief known for his imposing height, his battle acumen, and for his skill in diplomacy. A cousin and body guard of Crazy Horse, Touch the Clouds had earned such respect that by his thirties, he was elected as head of a tribal warrior society. He assumed the leadership of the band in 1875, and was confirmed as a “shirt wearer” to fill the position of his late father. After the Battle of Little Bighorn, he took his band north, eventually surrendering and enlisting in the Indian Scouts.

When Crazy Horse was fatally bayoneted by army soldiers, Touch the Clouds remained with him for hours until the great Oglala chief died. Following the death of Crazy Horse, Touch the Clouds went to Washington DC as a delegate in treaty negotiations. Touch the Clouds became one of the leaders at the Cheyenne River Agency in 1881, and continued to be a prominent advocate for his people until his death on September 5, 1905.

Scott Overton has captured, not only the size of this big man, but also the magnificence of his inner strength. If you like western art, this is a “must see”.

Here are just a few stunning examples from both the Museum and Gallery. Read More 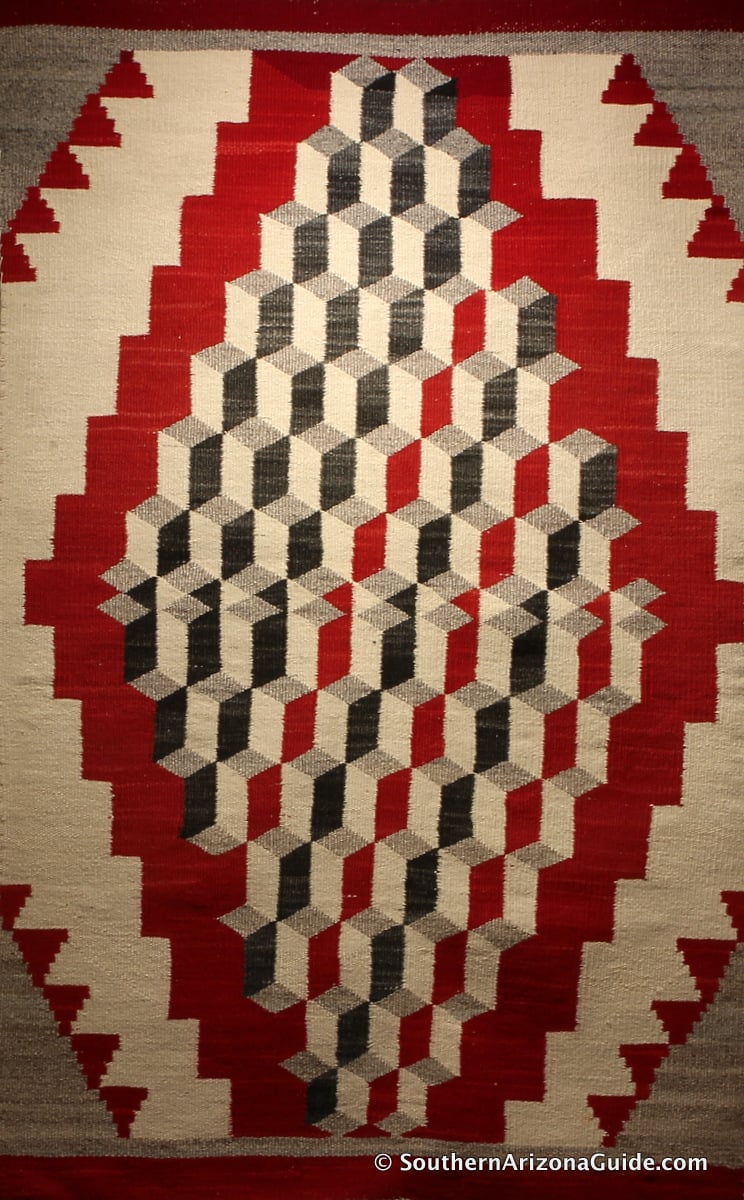 This early Navajo “Op Art” textile was woven with great patience nearly a century ago. Created in the Klagetoh region in the early-mid 1920’s, this trippy, mind-bending geometric design predates, and may have influenced, the mid-century European/American Op Art movement. Stare into the center of the design for only a moment, and suddenly a two dimensional textile magically becomes a three-dimensional world. Fascinating! 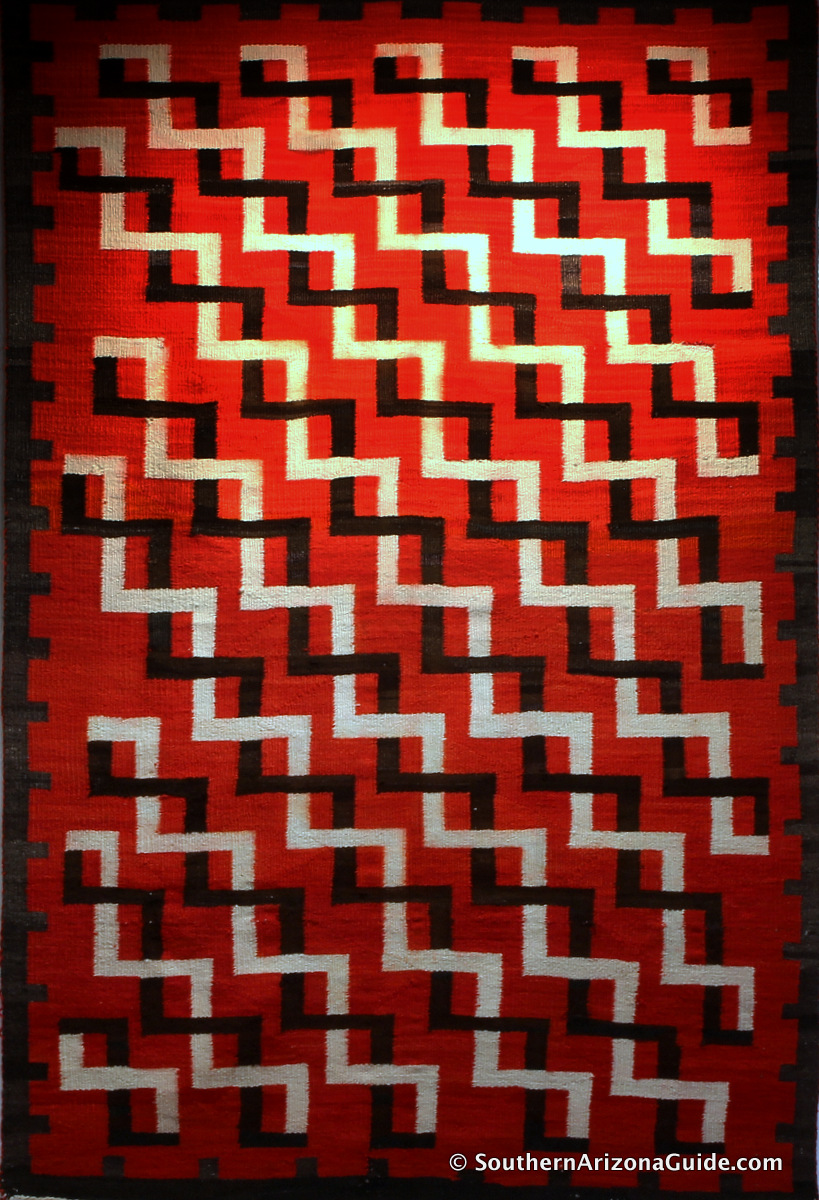 This Navajo design portrays the “stairway” or ladder into the lair of Spider Woman, high atop Spider Rock in Canyon de Chelly, towering 800 feet above the canyon floor. Within the Navajo traditions, Spider Woman is revered as the patron spirit of weaving. This weaving is attributed to the Ganado Trading Post. Anyone who has visited Canyon de Chelly and the adjacent Canyon del Muerto, as I have, can sense an almost mystical bond. 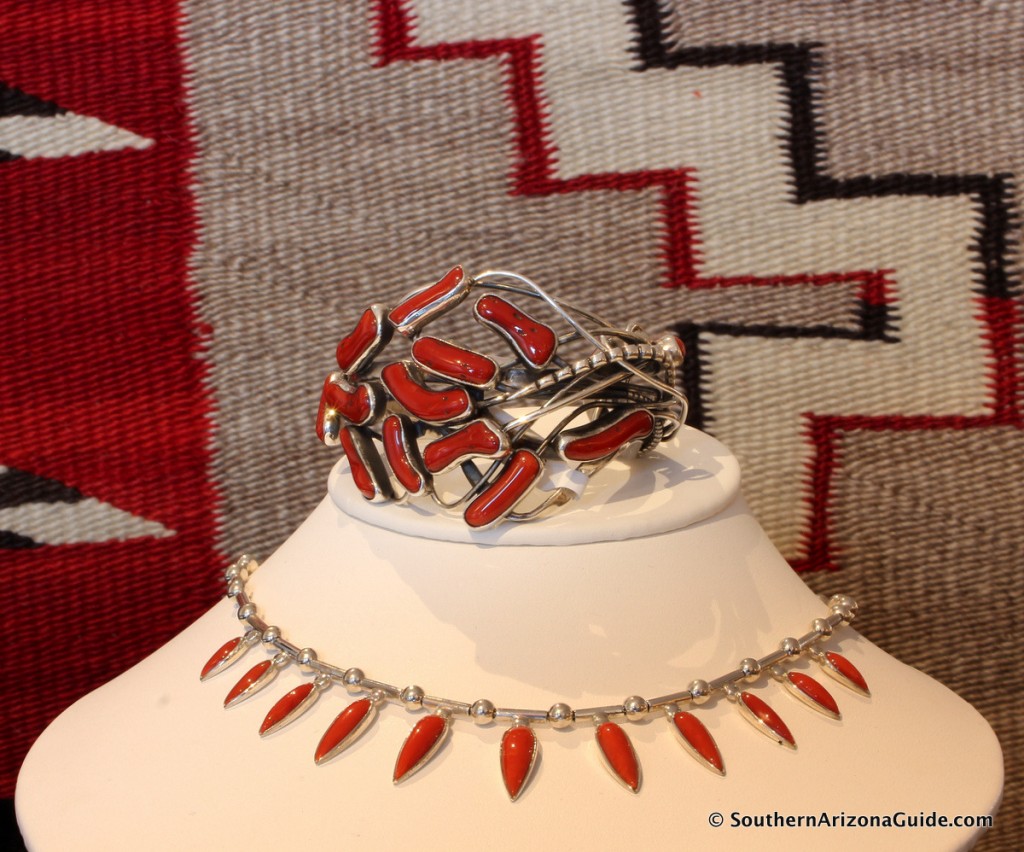 Exquisite! The Patania family legend spans three generations of distinguished jewelers from
Santa Fe and Tucson: the only three-generations of American jewelers to be displayed at the
Smithsonian Institution. This stunning necklace and bracelet set features rare Mediterranean coral sourced in the 1950’s by patriarch Frank Patania, Sr. 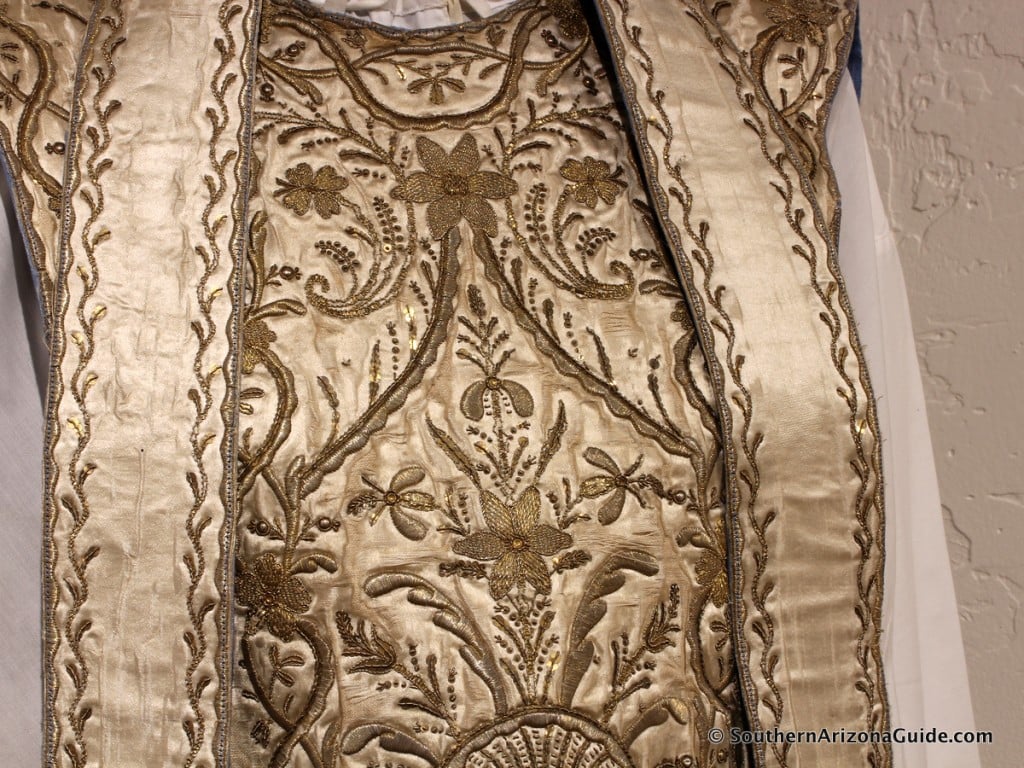 This intricate vestment was hand-embroidered with golden threads in colonial Mexico in the 1600’s. The vestment and other colonial artifacts are on view in an exhibit entitled Pimeria Alta: The Spanish Connection, curated by the Roman Catholic Diocese of Tucson. Note: “Pimeria Alta” is Spanish for “Land of the Upper Pima”; the designation the earliest Spanish explorers gave to the natives they met along the Santa Cruz River near present-day Tucson. 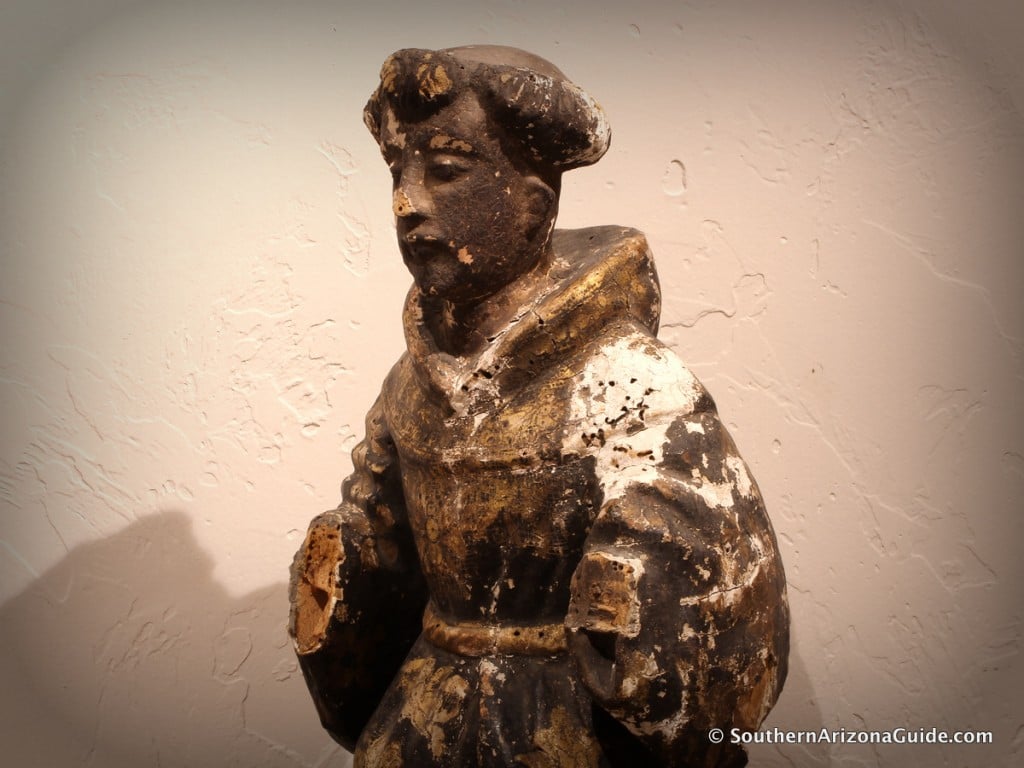 An unknown artist carved and painted this wooden bulto of St. Francis in the 1700’s. An
exhibition of bultos, santos, retablos, and other Spanish colonial religious artifacts are on display, many for the first time, from the archives of Roman Catholic Diocese of Tucson and other private donors.!

Opened in November 2013, the Museum & Gallery include 25,000 square feet of exhibit space, classrooms, painting studio, library, as well as meeting and auditorium space.

Master Workshop & Lecture Series
Beginning summer of 2014, TDART will offer a series of art workshops and lectures based on the Museum & Gallery exhibits. Check their website or Facebook page for particulars.

To learn about more worthwhile museums in Tucson, whether art, history, science, or just fun, see our list of the Best Museums here.