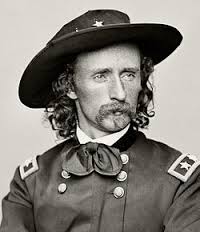 Most Americans know at least a little about Custer’s Last Stand, also known as the Battle of the Little Bighorn. The incident has an epic quality worthy of Homer’s Illiad or Virgil’s Aeneid.
The battle took place on June 25th & 26th, 1876 between the combined forces of the Lakota, Northern Cheyenne, and Arapaho tribes led by Crazy Horse and Chief Gall on one side against Lieutenant Colonel George Armstrong Custer and the U.S. 7th Cavalry on the other.
To say that this battle on the plains of Montana Territory was a huge success for the Indians would be an understatement. Not only was Custer killed, along with two of his brothers, a nephew, and a brother-in-law; five of the 7th Cavalry’s 12 companies were annihilated. Including scouts, the U.S. Army lost 268 dead and 55 injured.

While the Plains Indians clearly won the battle, they soon lost the war. Sitting Bull surrendered to the U.S. Army in 1881.

The Battle of the Little Bighorn is famous in part because it had enormous consequences; for the Indians, the Army, and the horde of white settlers who sought cheap land on the Great Plains and miners who sought mineral wealth in Black Hills. Read More

By contrast, almost no Arizonans, let alone other Americans, know about another battle that also had enormous consequences. It’s called the Bascom Affair and took place in Southern Arizona at Apache Pass in 1861 between the Chiricahua Apaches and the U.S. Army. It’s called the Bascom Affair because a poorly prepared West Point graduate, 24-year-old Lieutenant George Bascom, earned the wrath of Cochise, the great Chiricahua leader. The incident ignited the Apache Wars that resulted in the deaths of several thousand people: Anglos, Mexicans, and Apaches. 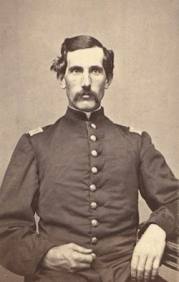 While it started as a relatively minor skirmish compared to Custer’s defeat, the Apache Wars saw Mexicans and Americans terrorized for the next quarter century. In the end, it took 5,000 U.S. soldiers and a couple hundred Apache scouts to finally run Geronimo, and his fast-dwindling band of hostiles, to ground in 1886 at Skeleton Canyon; not far from the town of Douglas in Arizona Territory. When the Apache Wars ended, the once proud Chiricahua Apaches were all but annihilated.

The few hundred humiliated and desperately impoverished Chiricahuas who survived the war, including the Army scouts that had made Geronimo’s capture possible, were shipped to Florida as prisoners of war. They were never allowed to return to their beautiful highland home we call the Chiricahua Mountains, a little more than an hour drive east of Tucson.

The Bascom Affair began on January 27, 1861, when Coyotero Apaches raided the ranch of John Ward at Sonoita Creek, stole some livestock, and kidnapped Ward’s 12-year-old stepson Felix. Ward complained about the raid to the commandant of Fort Buchanan, Lieutenant Colonel Morrison. Morrison ordered Lieutenant Bascom and 54 infantry soldiers to attempt to recover the boy and livestock by whatever means necessary. Ward and Bascom mistakenly believed that the raid was carried out by a band of Chiricahua Apaches led by Cochise, whose mountain homeland included, not only the Chiricahuas, but also the Dragoon and Dos Cabezas Mountains in Southeastern Arizona.

Apache Pass separates the Dos Cabazas Mountains from the Chiricahuas. Here Apache Springs was the only reliable source of water for many miles in any direction. Ft. Bowie was built here to support the Army’s many, mostly ineffective, campaigns against the Chiricahua Apaches. Today, I-10 runs very near Apache Pass and the ruins of Fort Bowie 25 miles east of Willcox. 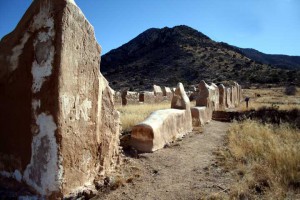 Back then, Anglo and Mexican stagecoach drivers and passengers, as well as wagon train teamsters and all their horses, mules, and oxen desperately needed that water on their arduous east-west journey. The problem in 1861 was that the Chiricahua Apaches had held sole possession of the Pass for several hundred years and they were not inclined to share it with these foreign invaders.

When Bascom arrived at Apache Pass with his soldiers in February 1861, they set up camp and sent word to Cochise that they had come in peace and just wanted to talk.

A day later, Cochise arrived unarmed with several family members. Bascom invited Cochise into his tent for a parley.

The following quotes are from a fine book; The Wrath Of Cochise, by Terry Mort.
The Wrath of Cochise: The Bascom Affair and the Origins of the Apache Wars

“This was the first time Bascom had been in such close contact with an Apache … It would not be surprising if Bascom felt a little uneasy at first. He was staring into the eyes of someone entirely different from anyone in his experience, a nearly perfect representative or embodiment of “otherness”.

“All accounts of Cochise portray him as an imposing figure. Indeed, he could be, and often was, a frightening presence, even to his own people. Said Lieutenant Joseph Sladen, “He carried himself at all times with great dignity and was always treated by those about him with the utmost respect and, at times, fear.” At this stage in his life, he was in his late forties, still vigorous, and no doubt menacing, especially when alarmed or annoyed. He had a ferocious temper … “ 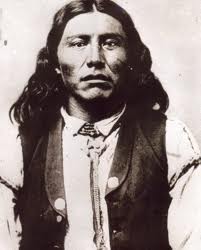 Taza, oldest son of Cochise. He was transported to Washington D.C. so see for himself the futility of contesting White expansion. While there, he died of pneumonia. People said he looked like his famous father. There are no known photographs of Cochise.

“Everything about Cochise – his dress, his long, black hair streaked with silver; his prideful demeanor – all of this and more must have been startling and weirdly fascinating to Bascom. There in front of him was the perfect barbarian, [like a wild Germanic chieftain] who might have stepped out of Caesar’s Commentaries …”

“… facing [Bascom] was this older Apache, this visitor from another time and place. He looked different, he dressed differently, he spoke an impenetrable language, and was said to be a murderer and thief. Unquestionably, Cochise had personally shed human blood with an edged weapon, which meant he had looked into the eyes of his victims as he was killing them. Bascom had never done anything like that; he had yet to injure, much less kill, anyone, even at a distance with a rifle shot.”

Cochise would not have been impressed with Bascom. “(He) had no understanding of the complexities of white culture. His only contacts had been with a few miners, transient emigrants, corrupt traders, Butterfield (stagecoach) employees, and soldiers. Few of these inspired much admiration or respect. He had no idea of the size of the gathering storm.”

In the tent, Bascom accused Cochise of stealing Ward’s livestock and stepson. Cochise was insulted. He told Bascom that neither he nor his warriors had anything to do with that incident. He also told Bascom that he would try to find out who was involved and return the boy and livestock.

At this point Bascom, in effect, called Cochise a liar and a thief … to his face! BIG MISTAKE! Amazingly, Cochise managed to escape the confines of Bascom’s tent, but his wife, children, and nephews were taken hostage in an attempt to force Cochise to cave to Bascom’s demands.

What followed over the next few days were several failed attempts by Cochise to exchange hostages. He tortured to death 4 Mexicans just to assuage his anger, but kept 3 Americans hostages alive to trade for his family.

But Bascom wouldn’t trade. He kept replying to Cochise’s entreaties by saying he could have his family back when the boy and livestock were returned. The Chiricahuas became more and more frustrated. To get his family back, Cochise and his warriors mounted a wild frontal assault on Bascom’s well-established defensive position. When that failed, Cochise became even more enraged and one barbaric cruelty followed another … by both sides. Cochise’s war of revenge was on.

The White settlers and miners clamored for the Army to protect them. The vast majority advocated extermination. This editorial in the Tucson Star reflects the general sentiment toward the Apaches that grew louder and more hysterical as the seemingly endless war continued.

“The very ground is moist with the blood of our murdered people. The very air rings with the shrieks of the victims of Apache atrocities. The glare of the frontiersman’s burning cabin signifies the fact that the Apache is on the warpath … not because he is (in) want of food; not because the whites have molested him in any manner, but purely in the spirit of fiendish rapine and murder; not to seek food or shelter, but to seek victims to satiate his devilish disposition to kill and destroy. The Apache is by nature bloodthirsty, and having no sense of responsibility, gratifies his cruel, heartless thirst for blood by murder an rapine.” Reprinted in the New York Times on November 29, 1885, the headline read: ‘Whites Advised to Attack and Slaughter Them”.

The U.S. Army, unlike the Mexican Army, had some ethical qualms about exterminating a people. But its officers were caught between the demands of the civilian population and their own rules of engagement. They had no problem killing Apache combatants, but were not willing to deliberately kill Apache women and children. The following quote is by Lt. Colonel Pitcairn Morrison, commanding officer at Ft. Buchanan and Bascom’s direct report.

“I cannot see any other course but to feed them or exterminate them.”

Well researched and well written, Mort reveals a compelling true story of flawed characters, poor judgment (in hindsight), and sweeping historical forces that initially brought Cochise and Bascom together; and then set the stage for a generation of all-out war that raged over the vast expanse that is the American Southwest and Northern Mexico. Moreover, Mort shines a penetrating spotlight on their respective cultures, the personal experiences that led to the decisions they made, and the tragic consequences of their choices. Like so much of Southern Arizona history, the facts are far more interesting than the myths.
For more features about Southern Arizona’s extraordinary past, visit SouthernArizonaGuide > Local History.