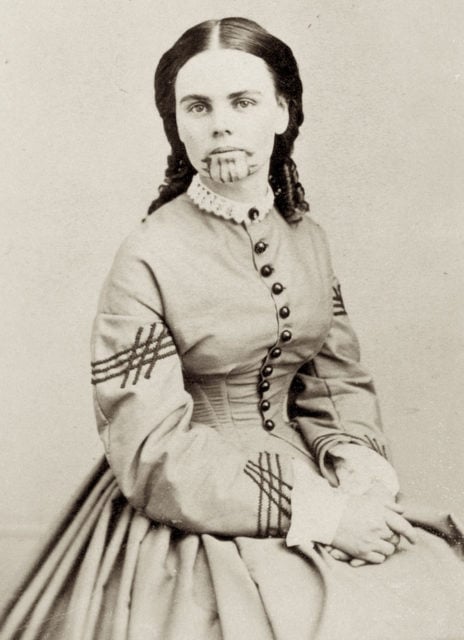 Last month we traveled to Oatman, AZ for a day trip from Wickenburg. There, we ate lunch, petted the burros, toured the old town and left. Before arriving in Oatman, I had a transient understanding of the Oatman Massacre and the captivity of Olive Oatman, the family’s 13-year-old daughter. She had been take as a slave by local Indians, later traded to the Mojave tribe with whom she lived for 4 years. I did know that she had been retrieved by her brother who had barely survived the attack on their family in the desert near the Gila River. But that is all I basically knew of the incident.

Fortunately, my spouse, Ms. Karen, had ordered the book: “The Oatman Massacre: A Tale of Desert Captivity and Survival, before we left for Oatman, but it did not arrive until we had returned. I read it with great interest. It is written by Brian McGinty, an independent scholar and writer specializing in American history.

In his book, he details the history of the Oatman family from their farm in Vermont, moving eventually to the mid-West where they took up with a young Mormon preacher named Brewster who had a vision about a “promised land” called Bashan located at the confluence of the Gila and Colorado Rivers. It was supposed to be a land of rich soil and forests. Anyone who has seen that area knows that such a depiction was foolish, for it is a desolate landscape if ever there was one. But the Oatmans and many other Brewsterites traveled there in the 1850s. Following disagreements among the several wagon families, the Oatmans went ahead of the group only to be attacked by Indians.

All of the family of nine were killed by the Indians except Olive and 8-year-old Mary Ann, and a son, Lorenzo, who had been badly wounded and left for dead. Lorenzo managed to make it back to a friendly Indian village where he was picked up by U.S. soldiers and taken to Camp Yuma.

McGinty is an excellent ethnographer, and in several sections of his book, recounts incidences that require knowledge of the local Indian tribes. For example, when discussing which tribe attacked the Oatmans, McGinty concludes that it was not the Apaches, as had been claimed by Reverend Royal Stratton who wrote the first book about the massacre and Olive’s captivity. Olive, following her return to the “world of the whites” also claimed it had been Apaches who attacked her family. “The Indians who lived closest to the attack site were the Western Yavapais or Tolkepayas. In fact, the part of the Gila River where the Oatmans were attacked then marked the time-honored southern boundary of the Tolkapaya territory. If nothing else, the proximity of their territory to the attack site justifies a close examination of the Tolkapayas as the probable attackers.”

Little Mary Ann did not survive but a year or two in captivity, succumbing to starvation at about age 10. But she didn’t suffer more than most of her captors whose children also starved during the drought of 1851-2.

McGinty’s ethnography continues. “The practice of taking captives and holding them in degrading and often brutal bondage was, as historians have demonstrated, widespread among all of the southwestern Indians and, in fact, common among almost all Native peoples of North America. Captives were often enslaved; sometimes they were ransomed back to the people from whom they were taken; not infrequently they were adopted into the captors’ families or tribes. In the course of their capture or enslavement, captives were sometimes wounded or killed. In a region in which an overall rule of law could not be imposed, because there was no super tribal authority to impose it, taking captives and enslaving them was often the only means of exacting revenge or redressing past wrongs. Captivity and enslavement constituted a kind of self-help system in which justice was exacted when there was no other way of doing so.”

About the attack, McGinty writes, “When Roy Oatman (Olive’s father) refused to give them (the Indians) any substantial food and when he allowed them to poke through his wagon and wander freely through his campsite, they realized he would make an easy target. They attacked him and his family, stole his cows and oxen and captured two of his daughters. It was an ugly but familiar scene in the struggle for survival in the southwestern desert.”

McGinty deals forthrightly with many delicate issues, foremost among those was the issue of Olive, in her five years of captivity having been sexually molested by a Mohave man. She was, after all, a teenage girl living like a native, dressed in only a skirt. Was she, in fact, married to a Mojave man, perhaps the Chief’s son? When she was about to leave the Mojaves, “Chief Espaniola’s own son insisted on stripping Olive of the meager possessions she had intended to take with her as souvenirs of her sojourn in Mojave Valley: small, tattered pieces of blankets that she was wearing and a few strings of beads. She said she was deeply hurt by this evidence of the son’s “littleness and meanness”. But, was the chief’s son Olive’s Mojave husband? And was he only insisting on the return of the marriage gifts he had bestowed on her, such as a white husband might expect the return of an engagement or wedding ring in the event the engagement or wedding was terminated? Why else would this Mojave (among all the others in the tribe) claim the right to retrieve the gifts made to Olive? And why would the other Mojaves – including the chief himself – permit him to do so?”

This is a fascinating book, full of such questions. The answers to many are contained herein. Other answers may never be known. You can purchase this book at your favorite bookstore or order it from Amazon. The Oatman Massacre: A Tale of Desert Captivity and Survival.