Recently I heard about a relatively new book about Geronimo. so, I went to Amazon to look up reviews of the book, The Illustrated Life and Times of Geronimo, by Bob Boze Bell. And there I read the following:

“Get ready for an in depth look at the most famous Indian in the world and how he got there. Bob Boze Bell’s controversial new book on “The Illustrated Life & Times of Geronimo” lays out the long and bloody path of Goyathlay (He Who Yawns) from warrior to celebrity to legend. With hundreds—yes hundreds!—of never before seen images, great maps and top notch scholarship, this is the book you need if you want to know the truth about Geronimo.”

Now, I have written a great deal about this legendary fellow for our Southern Arizona Guide. You can read about the other related books I have reviewed here Books about Geronimo.

But the fact that this book had “hundreds of never before seen images” intrigued me, so I bought it … for $24.95. After all, Ms. Karen and I have a portrait of Geronimo at 60 in our living room. It was given to me when I turned 60 as well.

After reading the whole book, I realized that most of the information I newly learned on this subject was hidden in the many sidebars scattered throughout. Here are a few examples.

Imagine your given name is He Who Yawns and you are battling your enemies in Mexico, and as you are about to dispatch a pleading soldado, who is on his knees, he suddenly blurts out, “San Jeronimo!” Turns out San Jeronimo is the patron saint of Please Save Me! Later, around the campfire, one of your fellow warriors mocks the dying soldado and mimics his cries. “San Jeronimo! San Jeronimo!” Everyone laughs. This becomes a nickname to some of your tribe who begin to call you “San Jeronimo” when they want to rib you. Later, when the Americans hear about this, they change the “J” to a hard “G” as in Geronimo, and the rest is history.

Of course, I knew that Geronimo’s original name was Goyathlay, translated “He Who Yawns”, and that “Geronimo” is short for Saint Jerome. But I had never heard of this version of how he became Geronimo.

Another story about Apaches that I had not heard before is this one.

Captain John C. Cremony gives a firsthand account of the incredible ability of Apaches to hide in plain sight. An Apache named Quick Killer offered to show him by example and he told Cremony to walk off a short distance from where they were standing on a plain with one bush “hardly sufficient to hide a hare.” Cremony walked forward ten steps, away from Quick Killer and then stopped. Quick Killer told him to turn around and find him. Cremony walked back to the bush and went around it three or four times and looked in every direction, but he couldn’t see where Quick Killer had gone.

Cremony said, “i called out and bade him to come forth, when to my extreme surprise, he arose laughing and rejoiced, within two feet of the position I occupied.” Quick Killer had completely buried himself under the thick grass and had covered himself so convincingly Cremony said he could have walked on him and not known he was there.” 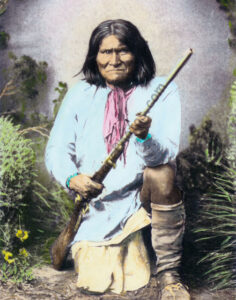 A colorized portrait of Geronimo taken while he was a prisoner of war.

Another story that was new to me was this one.

When the Chiricahaus were transferred from Florida to Alabama in 1888, Lieutenant William Wallace Witherspoon, the commander in charge of the Apaches, made Geronimo a justice of the peace at a monthly salary of $10.50. Witherspoon directed the unrepentant, old warrior to resolve any internal Chiricahua disputes and rule on misdemeanors under anglo law. In the beginning , Geronimo threw the book at everyone – almost literally. He sentenced one Apache to six months in the guardhouse for being drunk and another Apache got a sentence fo 100 years in prison for being drunk and fighting. After some temperance training, Geronimo got the hang of the justice system and became much more moderate, and fair.

Then there was this.

“Why did you select Geronimo to march in your parade, Mr. Presiden? He is the greatest single-handed murderer in American history.” Woodworth Clum (son of John Clum publisher of the Tombstone Epitath and also Indian Agent at San Carlo Apache Reservation)

“I wanted to give the people a good show.” Theodore Roosevelt 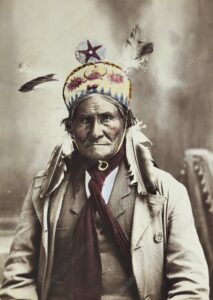 Geronimo wearing the outfit and hat he wore during Roosevelt’s parade, 1903.

The bulk of this fine book is a chronology of Geronimo’s life and the times in which he lived. Geronimo died in 1909, a mere 10 years before my father was born. So his life is not exactly ancient history. This is a book well worth purchasing and I highly recommend it to you. You can read my account of Geronimo and the Apache Wars on this website. It is a six-part series and quite extensive. I find Geronimo one of history’s most interesting individuals, complicated, heroic, as well as murderous.

You can buy this book on Amazon here. The Illustrated Life and Times of Geronimo