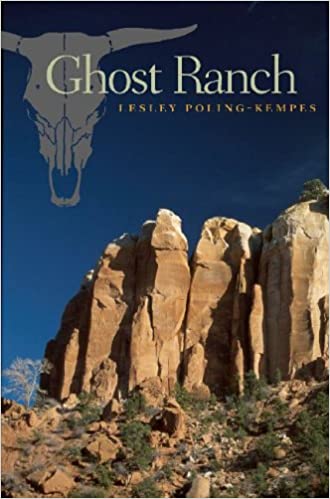 Before the Pandemic (BP), I went to the Festival of Books and got pretty carried away. The University of Arizona Press had a sale table, and one of the books I picked up was “Ghost Ranch” by Lesley Poling-Kempes”. This must have been 7 years ago now and I finally picked it up to read it. When attending college some time ago in a land far far away, I revered Ms. O’Keeffe, as I was a student of art, and abstraction in nature was my passion. I heard she lived on the Ghost Ranch in New Mexico, but knew nothing more about the place or her. These were the days without Google and the internet. I imagined dropping in on her and saying “Hi”. However, after reading this book, I may have been in for a rude surprise if I had.

The Ghost Ranch comprises about one-third of the 22,000 acres of the Piedra Lumbre basin in Northern New Mexico. It is the gateway to the great Colorado Plateau. Not far is the village of Abiquiu where the Georgia O’Keeffe Museum is.

The story of this fabled Ghost Ranch begins in the late19th Century when two brothers, surnamed Archuleta, laid claim to this land, rustled cattle for a living, and legend is, murdered people to protect their secret. The brothers were given the moniker, Los Animales, and the ranch was named Rancho de Los Brujos, “Ranch of the Witches”. After the brothers’ demise, The ranch changed hands several times after that, due to the spirits that lived there, until a woman named Carol Stanley started a guest ranch there and the story of the Ghost Ranch was born.

Through hard work and hired cowboys, Ms. Stanley brought the Rancho de Los Brujos back to life. Money and connections in New York helped too, and soon the New York rich started coming to the ranch for a real dude ranch experience. As a matter of fact, Georgia O’Keeffe first visited the Ghost Ranch in 1934 and never really left. Of course, she would go back to New York to be with her husband, Alfred Steiglitz in the winters until his death in 1946. But her heart and painting were focused on the Ghost Ranch forever.

Circumstances would not allow Carol Stanley to keep the ranch. She was eventually forced to sell. A naturalist and one of the first conservationists from one of the visiting wealthy families bought the Ghost Ranch in 1935, one year after O’Keeffe arrived. His name was Arthur Newton Pack. You may have heard of him.

Of course, I only read the book from the beginning, after reading Chapter 3 which was about Georgia O’Keeffe’s stay there. After finishing the chapter on Georgia O’Keeffe and how she came to live on the Ghost Ranch, I had a lot more questions and the whole history of this ranch and guest resort intrigued me. One question in particular, how did what was once the Ghost Ranch Lodge on the Miracle Mile in Tucson get its logo which looks much like one of O’Keeffe’s paintings. As it turns out, it was a gift from O’Keeffe to Arthur Pack on his first marriage. Arthur moved to Tucson in 1946 just after the war and built the Ghost Ranch Lodge, now a senior living facility. The Ghost Ranch Lodge has a colorful history as well, however, information is sparse. The architect for the Ghost Ranch Lodge was none other than Tucson’s most famous architect, Josias Joesler, who was the architect for St. Philips Church as well as hundreds of other projects in Tucson.

Being a transplant to Tucson, some 20 years ago, my history does not go back to the days of Arthur Pack and his philanthropic gift of the Desert Museum with his partner William Carr. When I think of the Desert Museum I usually think of Bill Carr, but until this book, I did not know that Arthur Pack was his partner in this undertaking. It opened in 1952. Pack bequeathed the Ghost Ranch in New Mexico to the Presbyterian Church in 1955. He had already sold a large portion of it to Georgia O’Keeffe, who in 1945 also purchased an old hacienda in Abiquiu, NM for its convenience to amenities, such as fresh food. She continued to call the Ghost Ranch her home, and visit and paint there until she was physically unable to. She died in 1986 in a Santa Fe hospital. She was 98.

If you want to know more about Georgia O’Keeffe’s life at the Ghost Ranch, this might be a good book, but the book is far more than that. Poling-Kempes history of the Ghost Ranch spans over 200 years. Lesley Poling-Kempes tells it in great detail and calls it a biography of the Ranch. Under the Presbyterians, The Ghost Ranch has become a retreat, education and conference center. Anyone can use it as an escape, take a workshop, or tour Georgia O’Keeffe’s old haunting grounds. Jim and I hope to visit next spring or fall as it has no air conditioning. We will let you know. If anyone has been there already, please tell us about your adventure. You can find this fascinating book, Ghost Ranch, on Amazon or at the retreat, of course.