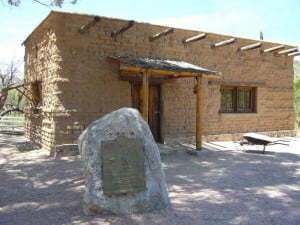 The Civilian Conservation Corps (CCC) was a National public work relief program. Operating from 1933 to 1942, it was organized to assist unemployed, unmarried men from relief families as part of the New Deal. The CCC provided jobs for these young men, helping families who were having difficulty finding jobs during the Great Depression. In addition to jobs, it was designed to provide a natural resource conservation program in every state and territory. Three million men participated in the CCC, providing them with shelter, clothing, and food, as well as a small wage of $30 a month, $25 of which was required to be sent home to their families.

The CCC was the most popular of all the New Deal programs. Benefits of working in the CCC included improved health, self-esteem, and employability. The CCC also led to greater public awareness and appreciation of the outdoors as well as the need for a comprehensive national program for the protection and development of our natural resources.

There exists a long list of Arizona sites in which the men of the corps lived and worked. In this article, we will mention only a few of those sites which are present today in Southern Arizona. While on your travels, you will see many positive instances of the presence of the CCC in our state. Enjoy! 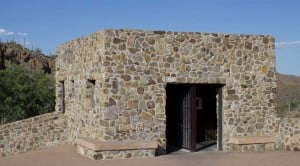 Restrooms at Gates Pass, no longer in use.

Tucson Mountain Park benefited from extensive work by the men of the Civilian Conservation Corp. They improved Gates Pass Road, built the scenic overlook there, and constructed an amphitheater. They built dams, soil erosion projects, ramadas and picnic areas which are still standing today. One of our favorites is Signal Hill Picnic Area in Saguaro National Park West. Many trails were built by the corp, including Brown Mountain Trail, Hugh Norris Trail, Wasson Peak Trail, and Ironwood Picnic Area. The work of the CCC is clearly evident throughout the Tucson Mountain Park.

Sabino Canyon benefited from construction by the Civilian Conservation Corps; The Caretaker’s Residence (no longer standing), picnic areas, toilets, retaining walls, dams and low water crossings, some of which are still evident.

Lowell Ranger Station in Sabino Canyon area was built in 1934 and was listed on the National Register of Historic Places in 1993 for its architecture, Pueblo Revival and other styles. 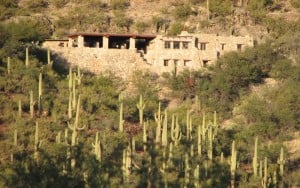 Colossal Cave Mountain Park
Before the CCC, access to Colossal Caves was limited. The young men of the CCC built roads, buildings, walkways, handrails, and lighting, making the caves accessible and a valuable tourist attraction. The work of the CCC at Colossal Caves is evident and extensive. When visiting the cave, please also visit the little museum dedicated to the many CCC contributions at this Mountain Park.

Mt. Graham
A lookout tower was built on Heliograph Peak to watch for forest fires. It remains today. Picnic tables at Noon Creek where we picnicked once is another legacy provided by the men of the CCC, as well as a bridge along the Swift Creek Trail. 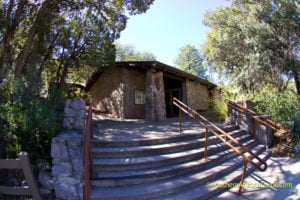 Chiricahua National Monument
Extensive CCC work was accomplished within the Chiricahua National Monument. The men built roads, trails and recreational facilities to highlight the “Wonderland of Rocks”. One of the projects the CCC built was the Echo Canyon trail, our favorite. (Hint: if you drive to the top, it is 4 miles downhill to the Visitor’s Center. There are shuttles that will take you there in the morning early.) 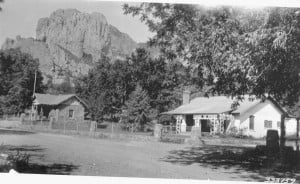 Portal Ranger Station
Now being used as a vacation rental, the ranger station was built in 1934 by the CCC. It was designed by architects of the United States Forest Service in a Craftsman Bungalow style. It served historically as Forest Service housing and government office space. It was listed on the National Register of Historic Places in 1993 for its Bungalow/Craftsman architecture. The NRHP listing was for three contributing buildings on a 1-acre (0.40 ha) property. 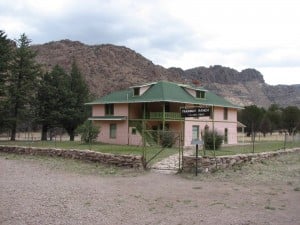 Faraway Ranch
On the west side of the Chiracahuas sits Faraway Ranch near the entrance to Chiricahua National Monument. The boys of the CCC were here for a while. Interestingly, the stone fireplace at the ranch house was built by Buffalo Soldiers, not the CCC.
Pinedale Ranger Station
In Apache-Sitgreaves National Forest near Pinedale, Arizona this ranger station was built in 1934 by the Civilian Conservation Corps. It was listed on the National Register of Historic Places for its architecture.

It was designed by architects of the USDA Forest Service in Bungalow/Craftsman style. The NRHP listing included three contributing buildings that served as institutional housing and as government office space, on 3 acres (1.2 ha).[1]

Rustler Park Fire Guard Station in the area of Douglas, Arizona was built in 1935 by the Civilian Conservation Corps. It was listed on the National Register of Historic Places in 1993 for its architecture, which is vernacular and other log construction. It was designed by USDA Forest Service architects and served as institutional housing. The listing includes four contributing buildings on 3 acres.

Cima Park Fire Guard Station near Douglas, Arizona was built in 1934 by the Civilian Conservation Corps. It was listed on the National Register of Historic Places in 1993 for its architecture, which is “vernacular, log” architecture. It was designed by the USDA Forest Service and served as institutional housing. The listing included four contributing buildings on a 2-acre (0.81 ha) area.

Other works in Southern Arizona that are worth visiting are:
• Box Canyon Road: through the Santa Rita Mountains between Sonoita and Madera Canyon. This is a worthwhile Day Trip. Go in good weather.
• Gardner Canyon near Sierra Vista.
• Patagonia: here you will find dams and other water control features.
• Pena Blanca Recreational Facilities: fire trails, camps and roads not far from Rio Rico and south of the ghost town of Ruby.
• Madera Canyon: picnic grounds, road maintenance.
• Parker Canyon: road maintenance and ranger stations 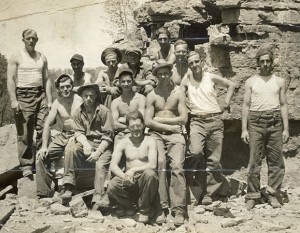 There are too many contributions made by the young men of the CCC to name in this brief overview. However, you can see evidence of their work almost everywhere you go.

For more information on the CCC in Arizona, buy the book.
Civilian Conservation Corps in Arizona, The (Images of America (Arcadia Publishing))

We Can Take It: The Story of the Civilian Conservation Corps

Our Mark on This Land: A Guide to the Legacy of the Civilian Conservation Corps in America’s Parks