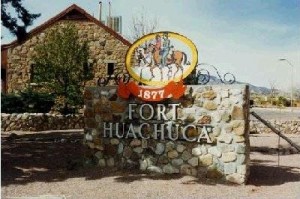 Fort Lowell in Tucson on Craycroft (watch our video on Ft. Lowell here)

Mangas Coloradas, chief of the Bedonkohe Apaches, whose homeland stretched from the Rio Grande westward to include most of southwestern New Mexico. He was the father-in-law of Cochise. 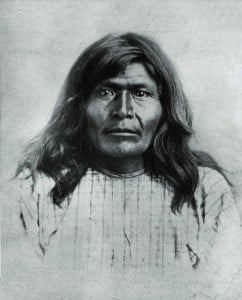 Victorio, chief of the Chihenne or Warm Springs Apaches and successor to Mangas Coloradas.

Juh (pronounced Whoa or Ho), a big, physically-imposing man and eventual war leader of the Nednhi band of Chiricahua Apaches whose homeland was the immense, high, and very rugged Sierra Madre in northern Mexico. He was both a very close boyhood friend and brother-in-law of Geronimo, who often spoke for him as Juh was a stutterer.
Goyathlay, a medicine man or shaman and eventual war leader of the Bedonkohe band of Chiricahua Apaches. He produced such fear in his Mexican enemies that, when he attacked, they would call out the name of their patron saint Jerome (Geronimo). He took it as his nickname. Read More

Lt. George Bascom, whose poor judgment and treachery against Cochise in 1861 started the Apache Wars that lasted for 25 years, resulted in the death of thousands of Mexicans and White Eyes, and finally the near genocide of a once-proud people. 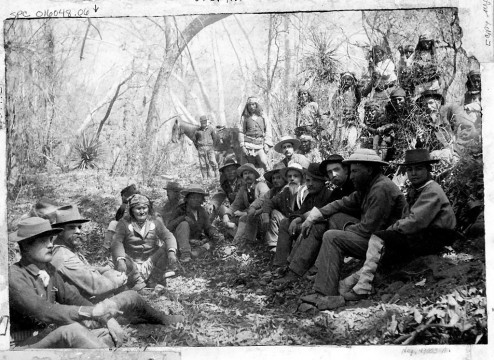 Gen. Crook (RT In Round Hat) tries to persuade Geronimo to surrender. Crook is ultimately unsuccessful. He later resigns his Arizona command and is replaced by General Nelson Miles. In September, 1886, Geronimo surrenders to General Miles and the Apache Wars are over.

General George Crook, veteran of the Civil War and Indian Wars. Tried to improve the Apache’s situation on the reservations. Was dismissed for failing to kill Geronimo or get his unconditional surrender. Though Crook was their enemy, the Chiricahua held him in high regard.

General Nelson Miles, a veteran of the Civil War, Indian Wars, and Spanish-American War. Replaced Gen. Crook and, with 5000 U.S. soldiers and 600 Indian scouts, finally ran Geronimo and his 24 remaining warriors to ground in 1886. To a large extent, Miles succeeded because the Mexican army, nearly as large and the American forces, left no safe haven in Mexico for the last of the free Chiricahuas.

Captain Emmet Crawford served under General Crook in the final phase of the Apache Wars, from 1882 to January 1886, when he was killed by Mexican soldiers in the Sierra Madre of Chihuahua while in pursuit of Geronimo. Crook had made Crawford commandant of the San Carlos Apache Reservation in 1882 to improve the miserable lot of the Indians there. Crawford was in command of the Apache scouts in hot pursuit of the hostiles.

Lt. Charles Gatewood led Apache & Navajo scouts against Chief Victorio in 1879. In August 1886, despite failing health, Gatewood led his 25 regular soldiers and two Apache scouts into the Sierra Madre of Northern Mexico where he finally caught up with Geronimo and his band, now reduced to 20 men and 14 women and children. Gatewood persuaded Geronimo to surrender to General Miles, which he did on September 4th in Skeleton Canyon, Arizona, 65 miles south of Fort Bowie.

Lt. Britton Davis
Served under Capt. Crawford in pursuit of hostile Apaches in General Crooks 1885-86 campaign against Geronimo. His memoir of that campaign, The Truth About Geronimo