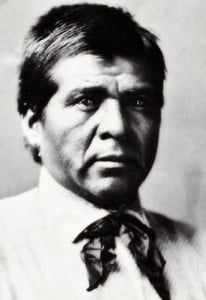 Aravaipa Apache Chief Eskiminzin negotiated the treaty that established San Carlos Reservation. For his efforts, Tucson citizens and their Papago (Tohono O'odham) mercenaries massacred over 100 of his women and children.

Chief Eskiminzin had tried to make peace with the Whites. He negotiated the treaty that created the San Carlos Reservation where he hoped that his people could be safe. Following the massacre, he spoke for his people when no one else would.

"If it had not been for the massacre, there would have been a great many more people here now; but after the massacre, who could have stood it? When I made peace with Lieutenant Whitman my heart was very big and happy. The people of Tucson and San Xavier must be crazy. They acted as though they had neither heads nor hearts..they must have a thirst for our blood. These Tucson people write for the papers and tell their own story. The Apaches have no-one to tell their story."

Following the massacre, President Ulysses S. Grant demands an investigation and a trial and threatens to put the state under martial law if the Governor fails to act. However, at the trial that occurs later in the year, the jury takes only 19 minutes to acquit more than 100 defendants. In subsequent years, several of the slave children were found working for some of Tucson’s most prominent families.

A Lt. Cushing and his troops relentlessly pursue Cochise, about whom Cushing had been making disparaging remarks. Juh and his warriors ambush and kill him in the Whetstone Mountains, about a half-hour drive northeast of Sonoita (Wine Country). 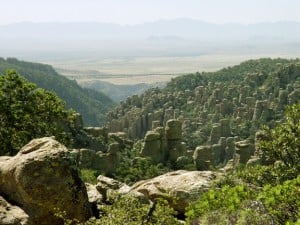 After a decade of guerrilla warfare against the Americans, Cochise concludes a peace treaty with General Oliver Howard. Howard, with the full authority of the United States government, grants Cochise and his people a huge permanent reservation in Southeastern Arizona. Now Cochise's people can stay in their ancestral homeland.

Moreover, as a critical aspect of the accord, Howard agrees to name as the new reservation agent the only White Man Cochise trusts, Tom Jeffords. By this "gentleman's agreement", the U.S. military will have no presence in or authority over the new reservation. The Americans and Chiricahuas are now at peace.

However, the agreement mentions nothing about the Apache's right to continue raiding in Mexico, an omission that General Howard and many others will live to regret.

1873
Massacre at Casas Grande (Northern Mexico near the U.S. border)

Mexican troops once again attack Juh's band of Apaches south of the border. After months of fighting in the mountains, the two foes agree to meet to discuss a peace treaty at Casas Grande, Sonora. After terms are agreed, the Mexicans offer the Apaches mescal. The Mexican troops attack and kill twenty drunk Apaches and capture more than two dozen. The few remaining Apaches limp back into the mountains, their only sanctuary.

Cochise dies, probably of stomach cancer. He is buried somewhere at Cochise Stronghold (Dragoon Mountains), but no one today knows precisely where.

Before he dies, Cochise extracts a sacred promise from his two sons, Taza and Naiche, that they shall remain at peace with the Americans.

His oldest son,Taza, is elected Chief of the Chiricahuas.

On an official trip to visit the Great White Father in Washington, D.C. Chief Taza dies of pneumonia. Though he is too young and not ready to shoulder the responsibility of guiding his people through their rapidly changing, disintegrating world, Naiche is elected Chief.

Chatto and Chihuahua become sub-chiefs. They will become major, and opposing, players in the saga of their people.

Without consulting the Indians, the U.S. government breaks the Cochise - Howard peace agreement by closing the Chiricahua Reservation in October and forcibly moving Natchez and his people to the San Carlos Reservation where inadequate food supply, exposure to the elements, and malaria will decimate their population. About half comply. Led by Geronimo, the rest escape to Mexico. Both decisions will have lasting and devastating consequences for the Chiricahuas.

Alma, New Mexico. In a violent attempt to force white settlers out of their homeland, Warm Springs Apaches of the Chihennes band led by Victorio swoop down on unsuspecting miners, killing three. Then they pursue and kill three others who tried to flee. They then massacre 35 sheepherders nearby. Victorio and his band leave the area when federal troops eventually arrive.

1880-October
Death of Chief Victorio in the Massacre of Tres Castillos, Mexico.

In the 1870s, Victorio and his band of Warm Springs (NM) Apaches are forced to move to the dreaded the San Carlos Reservation about 35 miles east of Globe, AZ and 140 miles north of Tucson. In 1877, he and his followers escape the reservation. To survive they raid, stealing cattle, horses, guns, ammunition and whatever else they need, as they evaded capture by both the U.S. and Mexican armies and citizen militias.

Lozen is Victorio’s younger sister, a ferocious warrior, and perceptive seer. She fights with him and his followers as they attack, and are attacked by, Americans who had stolen their ancestral homeland in southwestern New Mexico.

James Kaywaykla was a young Apache lad at this time. He told this story to Eve Ball who published it in her authoritative 1970 book entitled, In The Days Of Victorio: Reflections of a Warm Springs Apache.

Fleeing the U.S. Army, Lozen leads a group of mounted Apache women and children across the rapids of the Rio Grande into Mexico. Holding onto his grandmother as the group approached the riverbank, Kaywaykla knew that she and the others were terrified of drowning. Then, "I saw a magnificent woman on a beautiful horse—Lozen, sister of Victorio.”

“High above her head she held her rifle. There was a glitter as her right foot lifted and struck the shoulder of her horse. He reared, then plunged into the torrent. She turned his head upstream, and he began swimming."

Immediately, the other women and children follow her into the raging river. Amazingly, they all reach the far bank of the river, cold and wet but alive, Lozen rides up to Kaywaykla’s grandmother. "You take charge, now", she said. "I must return to the warriors", who were fighting to stay between their women and children and the advancing U.S. cavalry. Lozen drives her horse back across the wild river and returns to fight with her brother and his warriors.