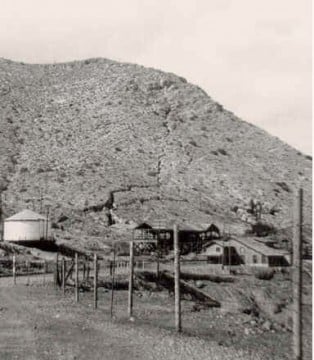 Editor’s Note: at the time of the devastating Southern Arizona Earthquake of 1887, there were only about 90,000 people living in all of Arizona Territory. The following account was written by Henry Bethea for The Copper Chronicles, a joint project of the Bisbee Mining & Historical Museum & Bisbee’s KBRP Radio Station. He holds the copyright and this article is reproduced here with permission. Geologists tell us that quakes along this fault occur about ever 100,000 years.

1887 Earthquake
May 3, 1887 was just another mid-spring day in Bisbee with pleasant weather, men toiling in the mines, stores going about their business, kids in school, donkey trains hauling wood and water, people busy making what was still a rough mining camp into a town and a place to call home. Everything changed at 3:12 pm.

An earthquake, reported later to be 7.4 on the Richter Scale, struck with force on a fault line in northern Mexico and the rattling and shaking began. The epicenter was approximately 40 miles southeast of Douglas and tremors were felt in every direction—in Tucson, Phoenix, El Paso, Albuquerque, Yuma, Mexico City and especially in Cochise County and northern Sonora. Near the center of the quake, the little town of Bavispe with 1500 people was nearly leveled and forty-two people died. On John Slaughter’s ranch east of Douglas, every building was destroyed. The Tombstone Epitaph later reported that of more than 7000 adobe bricks used at the ranch, less than 120 were left unbroken. 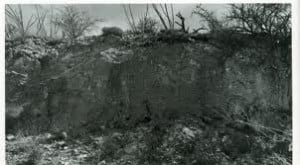 The average vertical offset on the fault was about 9 feet; maximum displacement was about 16 feet. It was the largest earthquake in recorded Arizona history. Photo from AZGS.

Charleston near the San Pedro River was so badly damaged that, though no one was injured, residents slept outdoors for weeks. A report from there stated “the walls of the saloon did a two-step and the floor did a shimmey.” Apparently the quake did not dim the resident’s sense of humor. In nearby Fairbanks, the railroad embankment moved almost a foot. All over the county, water geysers sprang up, small lakes and ponds disappeared or were magically created and on many ranches animals were either paralyzed with fright or scattered in panic.

Tombstone felt the shaking for a half-minute or more. Windows and glass were broken, buildings cracked and people ran into the streets. At the courthouse, employees hastily vacated the premises leaving prisoners in the jail unattended despite their pleas and screams. To the southwest in the Huachuca Mountains, an eyewitness reported that “the ground commenced to ripple and wave—it rose in billows to a height of 2-3 feet, then dropped leaving pronounced cracks” Rocky ledges rose and fell outward breaking into boulders that rolled down the mountainside destroying trees and bushes. The rock slides caused sparks that ignited fires in mountains from the Santa Catalinas around Tucson to Mexico’s Sierra Nacozari range. Dr. James Douglas in Bisbee reported that every range visible from the town was aglow that evening.

In Bisbee the effects were no less frightening. A newspaper correspondent in town, W.F. Banning, said boulders rolled down the steep canyon walls for ten minutes after the quake struck sounding like cannon shots. Some boulders only halted when they landed in the upper streets of town. At Carr’s Livery Stable the lantern chimney rocked like a cradle and window glass rattled at a fearful rate. One old prospector reported that residents were thrown into a fever of excitement. No doubt. Some former San Franciscans who were familiar with earthquakes said it was almost equal to anything felt in that city.

An adobe home destroyed by the 1887 earthquake just south of Douglas in Sonora, Mexico. Photo from AZ Historical Society.

People rushed into the streets in wild confusion expecting to be engulfed at any second. Mothers grasped little ones in their arms. At the Copper Queen mine, a whistle signaled miners working 400 feet below the surface. It wasn’t really necessary because the miners felt the shaking even at that depth. The Catholic Church on Quality Hill was cracked on one corner and several buildings in town were damaged. Atop San Jose Peak south of Naco clouds of dust rose into the air. All this resulted from the tremor that ran along a 30 mile fault line and which by some accounts lasted up to ten minutes though one to three minutes duration was most frequently reported.

Bisbee pioneer L.C. Shattuck was driving a mule team from Tombstone when the quake struck. The frightened animals ran away with the overturned wagon dumping Lem off. He had to walk many miles to get home to Bisbee.

After things settled down and life began to return to normal, earthquake jokes started to make the rounds. One Bisbee man was told to walk up Tombstone Canyon and view the canyon crack supposedly left behind by the quake. He walked for some time before realizing that the joke was on him. After that, the words “canyon crack” became fighting words around town. But that might be the origin of one of Bisbee’s most familiar myths. For as long as anyone can remember, the story has been passed along that the two large fissures on the eastern and northern faces of Bucky O’Neill Hill appeared as a result of the 1887 earthquake. Whatever geological forces caused those prominent cracks, the famous trembler was not the culprit. They were there long before the earthquake and long before anyone thought of settling and mining in the canyon. As is often the case, though, the myth is a lot more fun than the facts.

Another story claims that the San Pedro, once a free flowing river, dried up as a direct result of the earthquake. That one also is just a story. However, one tale may be more credible. It was reported that a crack about a mile long opened up right where the City of Douglas is located. John Slaughter, who as a witness to the event would have known, claimed he drove along the crack for several years when travelling between his San Bernadino Ranch near the border and Bisbee to buy supplies. He said that by 1900, wind and rain had filled the crack in. Over the years, other stories about the quake have probably faded from memory. But the event itself lives on.

Geologists continue to study earthquakes and faults in Arizona and Mexico. Surprising to some is the fact that there are several active fault lines around the region. Quakes strong enough to be felt do occur and in Southeastern Arizona are taken seriously. Earthquake drills are staged from time to time around the area to remind citizens what they should do if the shaking starts. The experts tell us that the Pitaycachi fault, the one that caused all the trouble in 1887, could slip again in a few thousand years. But with earthquakes you never know. It might be a lot sooner. No doubt the citizens of Bisbee enjoying that fine spring day, May 3, 1887, weren’t thinking about earthquakes. Starting on May 4, they probably thought about them a lot more.

The Copper Chronicles are presentations made possible through a partnership between Bisbee’s KBRP Radio and the Bisbee Mining & Historical Museum.