“Dendrochronology” is what kind of science made famous at the U of A in Tucson? Tree-ring dating and analysis. 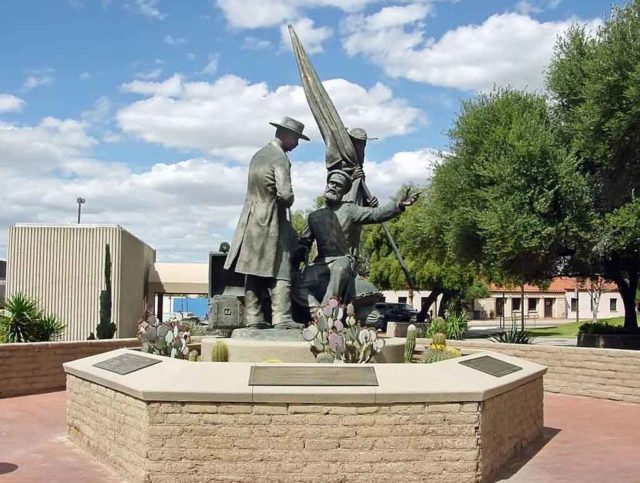 The plaques around this sculpture do a good job of telling this story. Take your time and read them.

This was the only military unit in the U.S. Army based on a religion. For many years, the Mormon community had been persecuted, forcing them to almost continuously move farther west to escape their tormentors, good Christian Americans. Thus, they had no love for the U.S. Government. However, the U.S. Government offered to compensate these Mormons for their efforts in the war with Mexico. Such compensation would be sufficient to move the entire Mormon community to Utah, which is where they wanted to settle.

In 1846, the battalion marched or rode 1800 miles from Iowa to San Diego, CA where they intended to keep the Mexican Army out of California. The quickest, easiest route was through Tucson. However, garrisoned at the Tucson Presidio was at most 200 viable Mexican soldiers. Remember, between 1820 and 1854, Tucson was located in Sonora, Mexico.

As about 360 Mormon troops approached Tucson, the Mexican commander rode out to tell them they were not welcome in Tucson. The commander of the Mormon Battalion decided to go through Tucson regardless of the wishes of the Mexican soldiers.

Realizing his Mexican troops were outnumbered and the Mormons had superior weapons, the commander abandoned Tucson and took his men to Mission San Xavier nine miles up stream to avoid a fight.

The Mormons entered Tucson and assured the residents, almost all 400 of whom were Hispanic, that they wanted no trouble and would just be passing through. The two groups started to trade. The Mormons had items of interest to the Mexican civilians, such as sewing needles, pins and cloth. The Mexicans had items of interest to the Mormons, such as fresh meat, fruits and vegetables. All went well and in 36 hours the Mormons left Tucson for San Diego without incident.

Read More About The U.S. Acquisition Of This Area
or
Skip To Next Stop

This seems like a good time to mention Tucson’s transition from a small Mexican village to small American town. As a result of the Mexican-American war (1846-1848), Mexico lost half it territory, including what was or became California, Arizona, New Mexico, Colorado, Nevada, and Utah. The war also left Mexico nearly bankrupt. 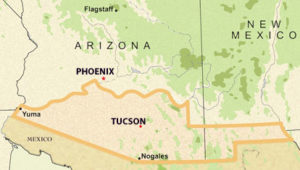 However, there was this relatively small slice of land still held by Mexico and the American South wanted it for a future railroad from St. Louis to San Diego and the Pacific Ocean.

The U.S. wanted this land and Mexico needed cash. Moreover, the Mexicans believed that this strip of land was near worthless. So when the Americans offered to buy it for $10 million, the Mexicans had a good laugh, and took the money.

This exchange of (worthless) land for hard cash was executed by treaty. James Gadsden, the American ambassador to Mexico, signed the treaty and it has ever since been known as the Gadsden Purchase.

This strip of land south of the Gila River and west of the Rio Grande, included Tucson, and was almost 30 million square miles. While it was wild and near worthless in 1854, it wasn’t worthless for long. The value of its mineral wealth is incalculable. Gold (Pearce); silver (Tombstone); copper (Bisbee) were found in abundance. Not to mention vast grazing lands for huge cattle ranches. Some like John Slaughter’s San Bernardino Ranch and Walter Vail’s Empire Ranch were over 100,000 acres. 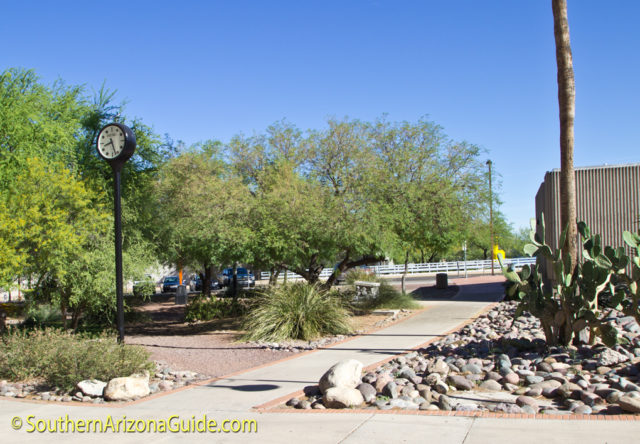 Turn right (north) at the clock and walk toward Alameda Street.

Leaving the Mormons, walk about 25 yards west and turn right at the clock. Here you will be leaving the turquoise line and facing the Tucson Museum of Art across Alameda Street. On your left, you will pass a plaque marking the site of the 1st Presbyterian Church. Turn left (west) and follow the sidewalk that parallels Alameda Street. A small park will be on your left. 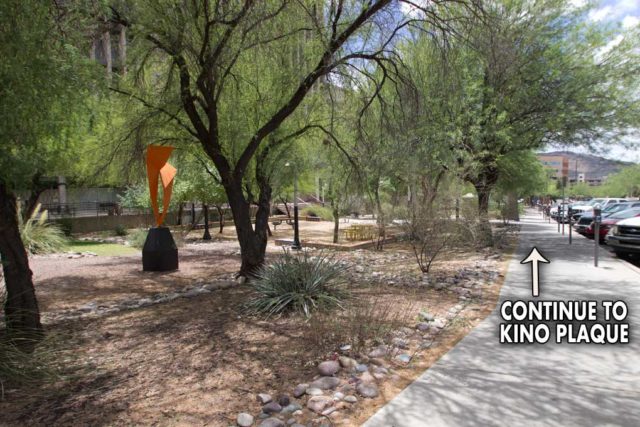 Continue west for about 80 yards. On your left is a small park with picnic tables. 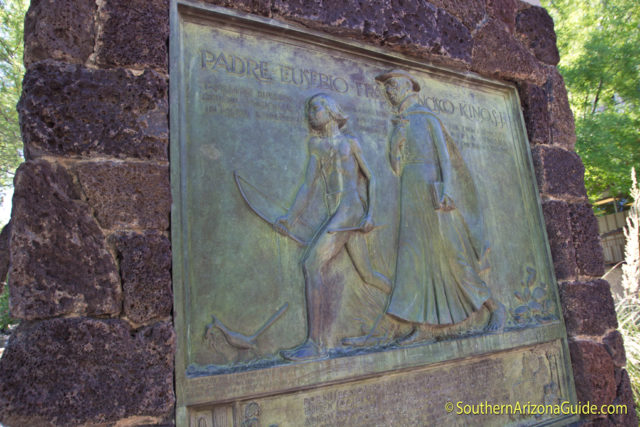 At the west end of this little park you will discover a memorial to Father Kino. You have arrived at Stop 9. Sit and contemplate his importance to the history of Tucson.

As a brief aside, at this point, Alameda Street was originally Calle de las Milpas, “road to the fields”. From here, during the Spanish era, this road went down to the agriculture fields along Rio Santa Cruz. Later, during the Pioneer era, Alameda was Cemetery Street because it went from “Downtown” Tucson to Tucson Government Cemetery, aka Tucson National Cemetery, at Toole and Stone just a block north of present-day Alameda. More on this cemetery story later.

In the early 1870’s, it was re-named Alameda in reference to the dense stand of Alamos (cottonwood) trees on the banks of the Santa Cruz.