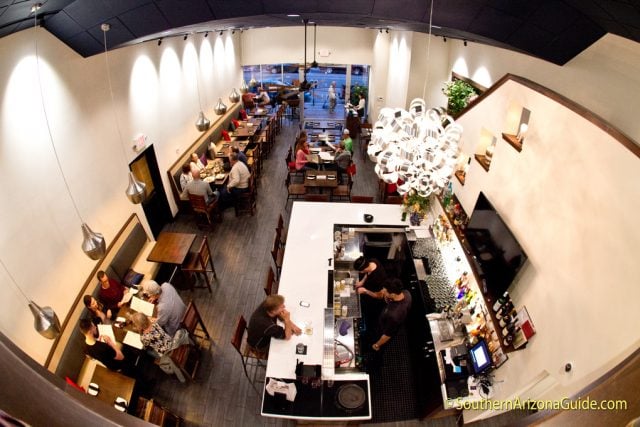 We had not written a dining review for some time and, because it was also our Wedding Anniversary, we decided to dine out to celebrate over Thanksgiving weekend (2016). Twenty-eight years not counting the 4 years we lived together while I tried to convince Ms. Karen that marrying me was a really good idea.

To enhance the festivities, and also because he loves Asian foods, we brought along Neighbor Roy.

Senae has been open on Congress Street for less than 6 months. Thus, doing a review would violate our unofficial rule not to review restaurants that have been open less than one year. We do this because most restaurants take at least a year to shake out. They are notorious for major staff turnover early on. 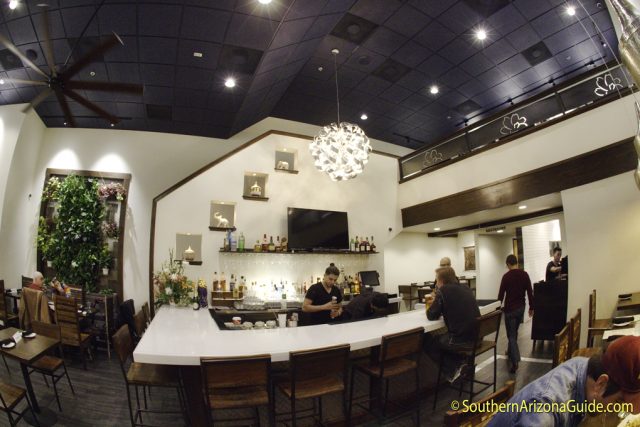 Arriving at 4:30 PM, our reservation was immediately acknowledged and we were promptly seated. The host, a charming young man whose name I did not catch, announced that Vinnie would be our server. I asked if Vinnie was any good. The answer was at least original. “He’s quick!” In truth, Vinnie turned out to be a very good server; pleasant, helpful, and “quick”.

The first order of business was cocktails. Ms. Karen ordered an Argentinian Malbec. Roy ordered a Singha … a Thai Lager. Because we frequently enjoy margaritas, particularly with Mexican dishes, I could not resist ordering their Thai Margarita … just for comparison.

Ms. Karen points out that wine-by-the-glass was reasonably priced. 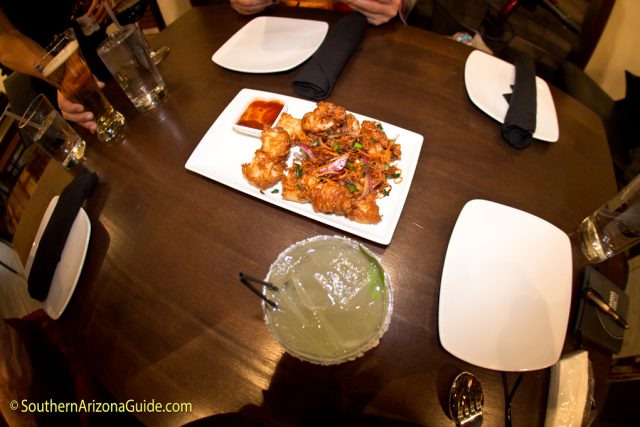 Calamari Appetizer at Senae Thai Bistro. Their amazing margarita is in the foreground.

Roy enjoyed his Thai Lager. Ms. Karen really liked her Malbec. But she also helped herself to a sip of my Thai Margarita. We both declared this margarita to be quite different from any other such cocktail we have enjoyed in dozens of local dining establishments over many years. But more than different, perhaps even exotic, this was one fine margarita.

As to the Pla Muk Tod, we all thought it very good. For myself, I believe it was the best calamari I have ever tasted in Tucson. Truly exceptional, crispy, not chewy or tough. 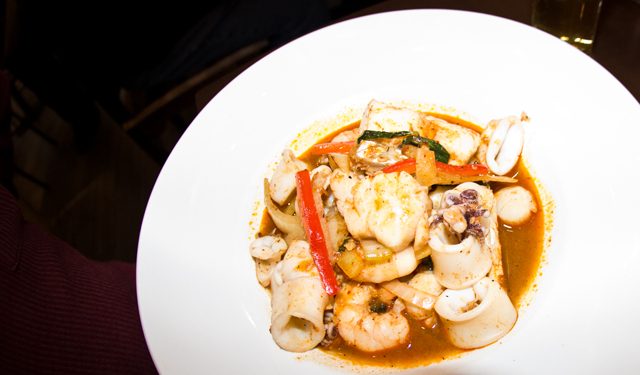 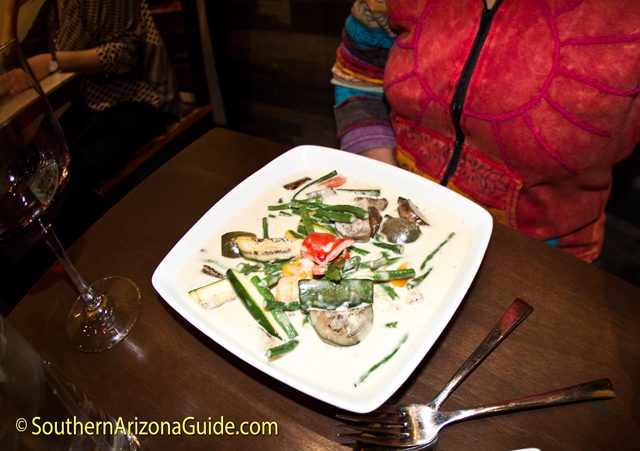 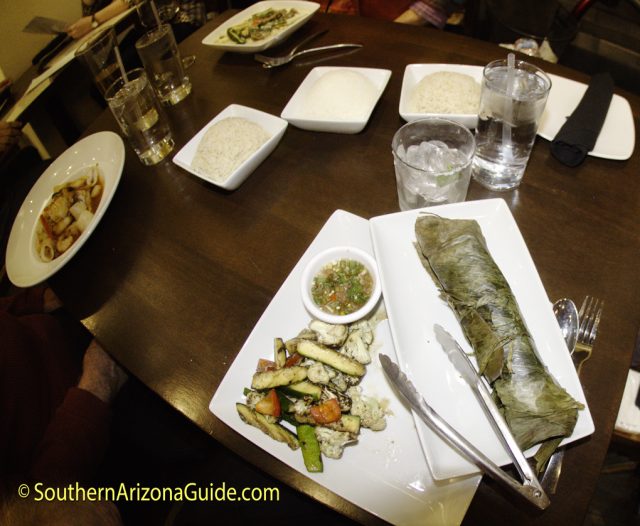 Vinnie took our orders and then asked, “On a scale of one to four, four being hottest, what is your tolerance for spicy?” We each could choose the degree of spicy hot. Moreover, when our meals were served, Vinnie brought a holder of relish dishes each with various hot spices - peppers, chili, etc. - in case our meal was not hot enough. Now that's class!

I ordered my dinner with a one-hotness, and it was plenty spicy for me. Both Ms. Karen and Roy were bolder than me, and I rather enjoyed watching their eyes water, sinuses clear, and tiny puffs of white smoke extrude from their ears. Both had order two degrees of hotness. You have now been warned. 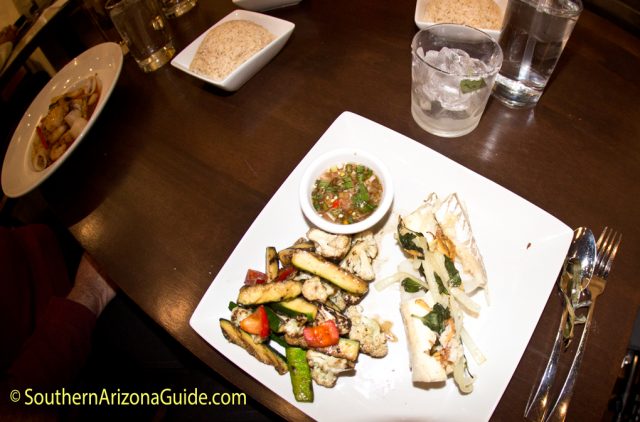 Alaskan Cod after being unwrapped.

Roy declared his dish “Excellent!” Ms. Karen took a taste of Roy’s and really liked it. As to her dish, “Very good, but then I love sauces, especially coconut.”

My Alaskan Cod was cooked and presented in banana leaves. Vinnie unwrapped it and out came the tender, juicy white fish filet, no head. The seasoned veggies and especially the attendant Vinaigrette dip were very flavorful. Excellent!

Senae Thai Bistro introduced us to a whole bunch of new flavors. If you are an adventurous diner, Senae is for you. Whatever you choose from their varied menu, do try their Thai Margarita. Excellent and like nothing else in town.

Amonwadee “Dee” Buizer, Chef and Owner of Senae Thai Bistro, brings over 30 years of successful restaurant experience to Tucson. Her husband, Jim, is a Professor of Environment at The University of Arizona. I have not met them. But I intend to, if for no other reason, to thank them for bringing this kind of quality dining to Downtown.

While the overall consensus of our little group is a four-saguaro rating, meaning Very Good, methinks that subsequent visits to Senae may well require an upgrade. With over 110 dining reviews on Southern Arizona Guide, we have awarded only 9 5-Sagauro ratings in over 5 years. Sanae may be next.

63 East Congress Street (at Scott Street)
Lunch: Monday - Friday 11AM to 2PM
Dinner: Monday - Thursday 4PM to 9PM. Friday & Saturday 4PM to 10PM. Closed Sunday.
Be sure to make a reservation, as most tables had reserved signage on them even as we arrived early.