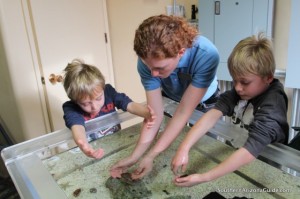 Lacey, our guide on our Behind The Scenes Tour of the new Warden Aquarium, teaches two young gentlemen about sea creatures in the Touch Tank.

April, 2013 - Not too long ago I posted an article about our Behind The Scenes Tour of the new Warden Aquarium at the Desert Museum. In that piece I included a photograph of two young gentlemen, perhaps 5 and 7 years of age, with their hands in the Touch Tank learning about sea life up close and personal.

Unfortunately, when they grow up, there will be little edible, protein-rich seafood for them to enjoy. Why? Given human over-population, our voracious appetite for seafood, and the utterly careless way we destroy ocean habitat and practice unsustainable fishing methods, our ocean bounty is being depleted … rapidly.

Pollution
Unregulated coastal fish farms pollute the ocean with fertilizer and other chemicals. Untold thousands of square miles of ocean surface are now littered with human waste and trash. Unsuspecting fish die by the millions when they consume the plastic and other garbage. 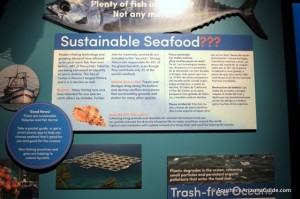 Overfishing
And then there’s “overfishing”: the taking of wild sea creatures at rates too high for a given species to replenish its population.

This is nothing new. In the1800’s, whalers seeking blubber for the lucrative lamp oil market, decimated the whale population. More recently, some fish that we eat, including Atlantic cod and herring and California’s sardines, were harvested to the brink of extinction by the mid-1900s.

These and many other isolated, regional depletions were highly disruptive of the food chain. By the late  20th century, the problem was global and catastrophic.

In the mid-20th century, international efforts to increase the availability and affordability of protein-rich foods led to concerted government efforts to increase fishing capacity. Favorable policies, loans, and subsidies spawned a rapid rise of big industrial fishing operations, which quickly supplanted local boatmen as the world’s source of seafood.

These large, profit-seeking commercial fleets were extremely aggressive, scouring the world’s oceans and developing ever more sophisticated methods and technologies for finding, extracting, and processing their target species. Consumers like me soon grew accustomed to a wide variety of fish species at affordable prices.

Only 10% Remain
But by 1989, when about 90 million metric tons of catch were taken from the ocean, the industry reached its high-water mark, and yields have declined or stagnated ever since. Fisheries for the most sought-after species, such as orange roughy, Chilean sea bass, and bluefin tuna, collapsed. In 2003, a scientific report estimated that industrial fishing had reduced the number of large ocean fish to just 10 percent of their pre-industrial population. A study of catch data published in 2006 in the prestigious journal Science predicted that if overfishing continues at the present rate, all the world’s fisheries will have collapsed by the year 2048.

What Can I Do?
I know what you’re thinking. The problem is too big. What could we as individual consumers do about it? After all, we just buy whatever seafood is in the grocery store, right? Turns out, there’s a lot we can do if we are armed with the necessary information. And the solution to this global problem was right there at the Desert Museum’s aquarium. 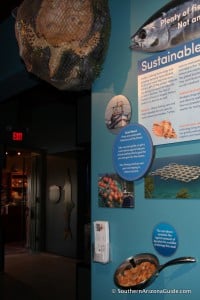 One of the exhibits is about sustainable seafood. First, it elegantly, simply illustrates one of the primary fishing practices that cause the depletion of seafood. At waist level is a skillet containing perhaps a pound of shrimp. Well above is a fishing net containing perhaps 50 pounds of miscellaneous sea creatures.

In the process of scrapping the seabed for shrimp, trollers rake up “undesirable” species, which die and are discarded. So, for every pound of shrimp we buy at our local grocery store or fish market, 50 pounds of other sea creatures are destroyed.

According to the Aquarium’s exhibit, “Many fishing nets and lines intended for one species catch others by mistake. Turtles, marine mammals, and birds are included in this “bycatch”. Shrimp fishers are responsible for 35% of the global bycatch, even though they contribute only 2% of the world’s seafood.”

Moreover, “Trawls and dredges drag along the bottom and destroy seafloor ecosystems that are breeding grounds and shelter for many other species.”

Now that’s waste on an industrial scale. It is an immediate, HUGE, and worldwide problem for the next generation of little humanoids … your children, grandchildren, or great-grandchildren as the case may be.

Next to the skillet of shrimp is a small rack with a tiny brochure from Seafood Watch (dot com), a project of the Monterey Bay Aquarium. In color-coded lists of green (Best Choices); yellow (Good Alternatives), and red (Avoid), this organization offers its recommendations, based on the latest scientific research, for which seafoods are OK to buy (meaning farmed or caught using sustainable methods) and which should not be purchased because the species on this list are being driven to extinction.

Ranking The Supermarkets
In a related effort, Greenpeace ranks supermarket chains according to their seafood policies. In 2012, Safeway and Whole Foods finished at the top of the list, as the first two retailers to receive “Good” rankings since Greenpeace’s first report in 2008.

Last month, Whole Foods announced that it would discontinue the sale of red-listed seafood that is “caught from depleted waters or through ecologically damaging methods,” reported the Associated Press.

The Worst
Two of the worst are Trader Joe’s and Kroger’s, the largest U.S. supermarket chain, that includes Ralph’s (Southern California), Fred Meyer in Oregon and Fry’s Food & Drug in Arizona.

Currently, Whole Foods is doing a MUCH better job than Safeway of informing their customers about which seafoods are raised and/or caught using sustainable methods. First, Whole Foods labels all the wild-caught seafood in its North American stores according to the sustainability criteria.

Safeway is not nearly as proactive. When I questioned my local Safeway store manager and butcher, neither were aware of any of this, nor did they show the slightest interest. So when Safeway customers buy seafood there, chances are they have no idea which seafoods are on the Red list and which were farmed or caught using ecologically sustainable methods. Safeway ranks much higher than other local supermarkets, but until they identify the seafood in their case according to sustainability,  I will switch my loyalty to Whole Foods, even though their location is not nearly so convenient.

Part Of The Problem; Part Of The Solution
Now that I understand that I am part of the problem, I also realize that I can be part of the solution. Henceforth, I will be purchasing my seafood only at Whole Foods and only from the Green List which is kept current by SeafoodWatch.com on line and through their iPhone and Android apps.