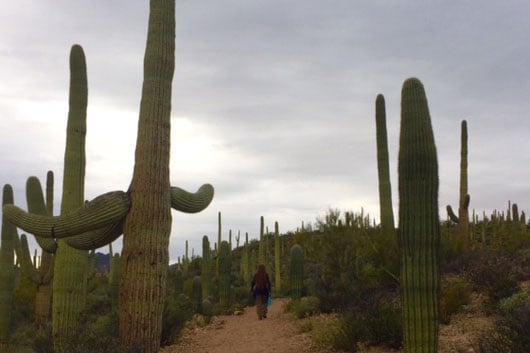 In 2017 the Pima County Natural Resources, Parks and Recreation Department unveiled plans to develop the Painted Hills property, a section of Tucson Mountain Park. Recently, one of the proposed trails for the planned trail system opened to the public signaling an opportunity to explore a new trail. Having moved to Tucson seven years ago, I prefer hiking on the West side of town to avoid cross-town traffic. It is a forty-five minute drive to places such as Sabino Canyon or Mount Lemmon, just to go for a routine hike.

The trailhead for the Painted Hills trail system is located on Anklam Road just west of the Player’s Club Road entrance to Starr Pass Resort, on opposite (north) side of the road. The Painted Hills property at Tucson Mountain Park protects many acres of scenic Sonoran Desert in the middle of the Tucson metropolitan area and, according to the County, is situated within five miles of 160,000 Pima County residents. Thankfully, hardly any of them were hiking the day I explored the new trail.

The trail itself is ranked ‘easy’ by ‘those-who-know’ but be warned, the trail itself slants downhill (ankle pronation) and sections are strewn with fist-sized rocks making it easy to slip. The trail was developed along single-width dirt roads — tracks — already existing on the site and about a mile from the trailhead parking lot, the path forks. The left track switchbacks down and across the slope meeting the right fork, which aims steeply and directly downhill, near the bottom. I can only imagine the erosion that will occur on this fork when the monsoons hit. In my opinion, poor trail design.

From this low point, the trail rises again to a viewpoint about a quarter-mile distant. The vista is worth the rocky climb with 360º views from which the metropolitan landscape spreads across the land. Interesting to note is the natural bowl in the mountains to the West, home to the Trail’s End community. High atop the ridge, several homes capitalize on the awe-inspiring views to the West and East.

In addition to its proximity to Downtown Tucson, two aspects make exploring the Painted Hills portion of Tucson Mountain Park more interesting. First, the trail crosses Greasewood Wash which is more akin to an arroyo in places than a typical wash and worth a hike in and of itself. Brightly colored, yellow-green lichen covers portions of the volcanic rock boulders that line the sides of the wash and patches of vibrant, emerald-green moss appear along the sandy sides. In this desert environment, emerald green isn’t a color seen often and the contrast against the sand’s beige and the deep mahogany of the volcanic rocks is stunning.

As you hike, you may notice that prickly pears, ocotillo and chollas are sparse but that there are hundreds, if not thousands, of saguaros — some reaching forty feet or more. Take your time and walk slowly because what is really worth noting is that portions of the ground along the trail seem like intentional nurseries for young saguaro. I don’t think I’ve ever seen such a high concentration of young saguaros in one place; I lost count of those which were only four-to eighteen inches in height. I’m not a botanist but conditions there must be ideal to encourage such prolific growth. It was heartening to see that civilization hasn’t crowded out new life.

The trail is an out-and-back with one minor loop. All-in-all about ninety minutes at a fairly leisurely pace. Since the trail is so close, it would be a great hike either before or after work, weather and daylight permitting. Be sure to take water as there are no drinking fountains.