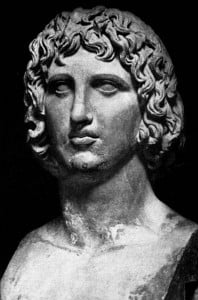 April 2013 – The ancient Roman poet we call Virgil (70 BC – 19 BC) taught us an important lesson when he wrote the epic Aeneid. “Beware of Greeks bearing gifts.”

I was reminded of that proverb recently. I had just been seated by the hostess at Opa! Greek Cuisine & Fun on N. Campbell when the “gift” was place on my table. It consisted of a rather large plate of sliced pita bread and two dips: one hummus and the other cucumber. Generally I don’t much care for hummus and I had all the cucumbers I’ll ever want when we were in Egypt.

I inquired of the hostess as to why I was being served this “appetizer” since I had not ordered it. “Oh,” said she, “it’s complimentary. Try it. You’ll like it.”

What was I to do? Since I was dining at Opa! to write a dining review, I felt obligated to at least try a tiny bit of both dips. First, I tried the hummus dip. To my surprise and delight it was very tasty. I also noted that the pita bread was fresh. So I then tried the cucumber dip. It tasted quite different than the hummus, but it too was much to my liking. “Well,” I thought, “this could get interesting.” Continue reading

Turns out that the hostess, Lydia, is also an owner along with her son-in-law, chef Andreas Andoniadis. Since their menu is quite extensive, I asked Lydia for her recommendations. She described several of their most popular dishes and I settled on the Athina Chicken: grilled chicken stuffed with spinach, roasted peppers, and fresh feta cheese ($9). It came with a Greek salad: romaine lettuce, fresh feta cheese, Greek olives, tomatoes, red onions, green peppers and slices of cucumber.

The salad was very fresh and the chicken was as delicious as any I have ever enjoyed. 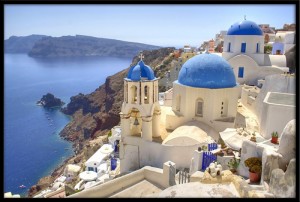 Another feature I appreciated about Opa! was the interior design. For example, a large mural on the wall opposite my table was a painting of Santorini that made me forget that I was dining in just another Tucson strip mall.

As I was finishing my Athina Chicken, Lydia asked if I would like dessert. I explained that my lunch was both delicious and filling and that I was watching my …

I had not quite finished my sentence when Lydia told me that one of their most popular desserts is baklava. “Try it,” she said, “you’ll like it.”

I love baklava, but have not had any in years. I recalled when we lived in Maryland, one of our neighbor families was Egyptian. The mother would occasionally bring us homemade baklava. So good! I had to sacrifice my diet one more time and at least try Opa!’s.

Lydia was right, as usual. I REALLY like Opa!’s baklava. When I was visiting with Chef Andreas for a few minutes after my dessert, he said his secret is to use no sugar, only natural honey from local hives. Indeed, he said that virtually all of his ingredients are from local farms.

As I was signing the credit card ticket, one of the waiters placed a large “to-go” cup of iced tea with a wedge of lemon on my table, the same as I had been drinking with my meal. I looked at him quizzically. He apparently anticipated my question, because he said, “Complimentary, of course.”

Can I wholeheartedly recommend this Greek restaurant? Absolutely! Friendly staff, delicious food, good service, and a pleasant ambiance. Just the kind of establishment we include in our List of the Best Southern Arizona Restaurants. And that’s were I will put this review. Dine at Opa! You’ll like it.