The Sierra Madre Occidental in Northern Sonora and Chihuahua Mexico is vast and extremely rugged. The interior consists of high lave rock plateaus covered with fertile soil, thick pine and oak forests, and deep river canyons, including magnificent Copper Canyon, four times larger than Arizona’s Grand Canyon. People could get lost forever in such a place.

In fact, that is exactly what the last remnants of the Chiricahua Apaches did after Geronimo and Chief Naiche surrendered to General Miles in September 1886. All of their people that the U.S. Army knew about, including the Army’s Chiricahua scouts, were shipped to prisons in Florida as prisoners-of-war. And prisoners they were for the next 27 years. Read More 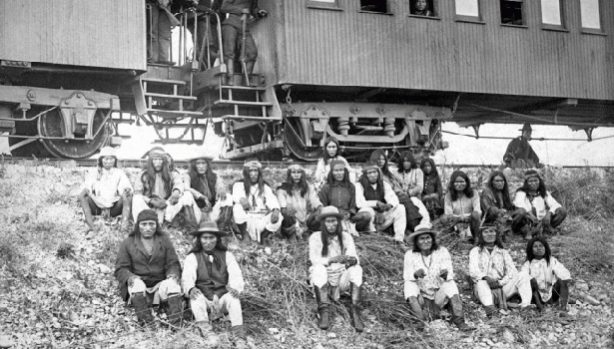 Hostile Apaches being transported from their ancient homeland in Southern Arizona to prisons in Florida. September 1886. Chief Naiche front center. Shaman and war leader Geronimo on his left.

But the last remnants, perhaps 100 individuals, mostly women and children, continued to live free and raid in Northern Mexico, Southeastern Arizona, and Southwestern New Mexico well into the 1930’s.

How long the Chiricahua Apaches lived in the Sierra Madre and used these mountains as a natural fortress against both Mexican and American soldiers and civilian militias, no one knows. Several hundreds years, for sure. This was the home land of the Nednhi band of Chiricahuas. From here, they could raid towns and ranches on both sides of the border and then disappear back into the Sierra Madre. As General Crook, then General Miles, discovered, if the Apache don't want to be found, it is all but impossible for Americans to find them, let alone subdue them. 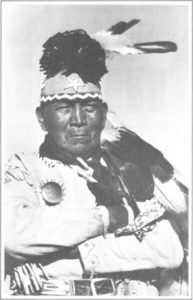 In the 1870's and early 1880's, Juh (pronounced Ho’) was chief of the Nednhi band of Chiricahua Apaches. The Nednhi lived in the northern Sierra Madre, a hundred miles or so south of the International border.

I remember Daklugie telling Miss Ball that, from the point of view of the Mexicans and Americans, his Nednhi band “was the worst of the lot.” No truer words were ever spoken.

Most Americans today believe the Apache rein of terror ended with the surrender of Geronimo and Naiche and their 20 some followers: warriors, women, and children, nearly all close relatives.

In 1924, while Hollywood was still pumping out silent Cowboy and Indian westerns, an Apache raiding party left the safety of the Sierra Madre and rode north to the Animas Mountains of Southwestern New Mexico. This raiding party consisted of perhaps a dozen warriors and a woman on a mule dragging a travois.

To make it difficult for their enemies to determine what direction they were headed, the Apaches had tied buckskin on the hooves of their mounts. 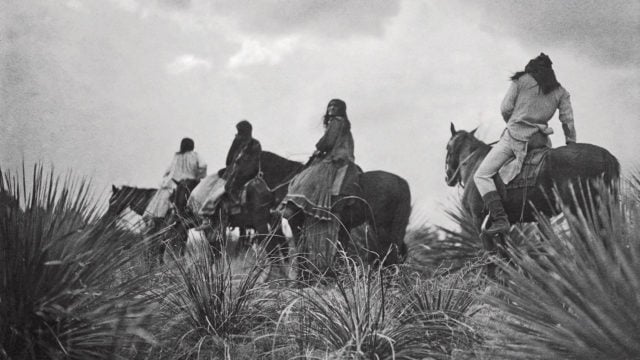 The Apaches Are Back!

By chance, they came across Frank Fisher, a local cowboy and some-time prospector. They easily killed him and stole his gun and mule. It wasn’t long before another ranch hand discovered the body and sounded the alarm. "The Apaches Are Back!"

No one had to explain to the local ranchers, miners, and town folks what this meant. They had heard about the many Apache depredations suffered by their grandparent’s and parent’s generations.

The next morning, the Apaches stole the best cow ponies and a herd of cattle from rancher Ross Sloan in Cochise County, Arizona. Then they stole horses and mules from several other ranches in the area, and went on to rob and vandalize an isolated house.

Surprisingly, the Hidalgo posse trailed the raiders to their camp near Big Hatchet Peak and, guns drawn, they stormed the rancheria. Meat was still cooking over open fires. The rawhide shod horses and mules were still in camp. But the Chiricahuas had disappeared over the International border and, presumably, headed south to their stronghold in the Sierra Madre.

Days later, a couple of Arizona cowboys saw the raiders in Sonora. They reported something almost unbelievable. The Chiricahua leader was a big white man with a long beard and blonde hair dressed like an Indian.

Many believed the speculation that the White Chief was Charlie McComas. In 1883, 6-year-old Charlie was traveling with his parents near Silver City New Mexico when Chiricahua Apaches attacked, killed his parents and kidnapped Charlie.

In the intervening years, no white man ever saw Charlie again. Had he survived, by 1924 he would have been 47, prime age to be a powerful Apache chief. However, Daklugie affirmed that the little boy had been killed when Mexicans attacked their camp.

Daklugie said that Charlie “was brought back with the rest of the raiders by Chato. . .I was not present when the Mexicans attacked that camp, but in the escape Charlie was killed.  Of this I can be sure.  When an Apache family adopted a child, it gave it the same care and protection it did its own. Nobody among them would have killed that child.  During that attack Apache children, too, lost their lives.”

At the turn of the 20th century, there were probably 100 Apaches scattered through the northern Sierra Madre. They were a constant menace to the local Mexican ranchers and cowboys, and to the Mormon farmers who settled in the mountains after polygamy was outlawed in the United States in 1890.

In September 1892, a Danish-born Mormon named Hans Thompson left his family in Cave Valley, in the northeast Sierra Madre, to visit another wife in a valley 30 miles away. While he was away, two Apache warriors appeared at his Cave Valley homestead. They shot and killed 17-year-old Hiram Thompson. Then they shot and wounded his 14-year-old brother Elmer, who played dead and later described what happened.

His mother came rushing out of the house. “Take anything you want,” she said. “Please don’t shed any blood.”

“We like to shed blood,” one of the Apaches said in English, and shot her in the stomach. Then a group of Apache women surrounded her and beat her to death with rocks. The men ransacked the house, donned sacred Mormon garments, stole the horses, and rode away.

For Apaches, Kidnapping Was Essential To Survival

The Apaches, like many American Indian tribes, had no concept of ethnic purity. For centuries they had added to their numbers by taking captive women and children from other tribes and from Mexican and Anglo communities. They continued to take captives well into the 1920s. Conversely, Mexican ranchers often captured Apache children and raised them as house servants or field hands.

All sides committed atrocities. In the 1930s, Sonoran rancher Francisco Fimbres led a series of extermination campaigns against the remnant Apaches. They had murdered his wife, then stole and later killed one of his small children. Fimbres and his men hunted for Apache camps that, at this time, typically contained mostly women and children. Nelda Villa, a local Sierra Madre historian and a renowned expert on the remnant Apaches, believed that most of the men had already been killed by Mexicans during raids. Fimbres and his men killed all the Apache women they could find and adopted the children.

In Search Of The Lost Apaches

In 1937, Helge Ingstad, a Norwegian anthropologist and adventurer, went up into the Sierra Madre to find the “lost Apaches,” as he called them. With him were two Apache guides from the Mescalero Reservation in New Mexico. One guide claimed he had fought with Geronimo. It was an odd, quixotic expedition. His guides were more interested in finding a lost treasure they had heard about. At one point, they mutinied and disappeared for a while. Ingstad found no lost Apaches. However, it is possible that the Mescalero guides did make contact with the remnant Apaches without telling the Norwegian.

Ingstad wrote a book about his quest called The Apache Indians: In Search of the Missing Tribe

. It includes interviews with Apaches who had been captured as children by Mexican ranchers. Amazingly, he tracked down one 12-year-old girl in the suburbs of Los Angeles. Her Apache name was Bui, or Owl Eyes, but she was now Carmela Harris.

When she was 3 or 4 years old, already orphaned, Mexican cowboys found the all-female Apache camp she was living in with her grandmother, a strict, fierce woman who had just sewn her a pretty buckskin dress. The vaqueros killed her grandmother and took her to an American woman called Dixie Harris who was living in Nacori Chico, Sonora. Ms. Harris adopted the little Apache girl and later moved to Los Angeles. Carmela told Ingstad that she much preferred high school in California to the wilds of the Sierra Madre, where her band lived in fear and moved often to avoid detection.

“I was often afraid, and I do not want to return. Nana was so strict, and we were not allowed to do anything. Once there was another small child who cried a lot. Nana strangled her to death. We dared not make any noise. But once in a while, I remember that a woman sang me to sleep.”

Carmela Harris graduated high school in Tujunga, California, and became a nurse. She never married and continued to live with Dixie Harris. In 1972, they left California and emigrated to a farmhouse in the Italian hill town of Perugia. Carmela loved Italy, and said it was the happiest time of her life. But she died suddenly in her mid-40s, after fainting while standing and smashing her head on the ground. She was buried in Perugia, and many years later, in the attic of the Tujunga house, the Harris family found the little buckskin dress that Carmela's grandmother had sewn for her.

According to Señor Bassi, the cowboys who found this 12 or 13 year old girl wandering almost naked in nearby mountains dressed her in baggy men’s clothing. But she would not speak or look directly at her captures. Neither would she eat. The year was 1933.

The authorities put her in the town jail like a caged beast. The girl curled up into a ball with her back to the growing crowd of gawkers. It was clear to all that this curiosity was a remnant Chiricahua Apache surviving in the Sierra Madre nearly a half century after Geronimo’s surrender and the end of the Apache Wars.

"It was a sad thing," said the old man, a retired theater owner in this raw cowtown in the foothills of the Sierra Madre. "Vendors were selling food outside. It was terrible, like a circus."

The townspeople had all heard family stories about how remnant Apaches would come down from the mountains to steal horses from the local ranchers well into the 1920’s. And how the ranchers would follow in hot pursuit and often return with their horses and fistfuls of Apache scalps.

According to Señor Bassi, "She died in the jail," "It took a few days. She starved herself to death."

La Blanca Bronca was the last documented Apache captured in the Sierra Madre. By 1935, the others had been exterminated or absorbed into the Mexican population.