Arizona Game & Fish Department estimates that about 200,000 coyotes live in Arizona. They are equally at home in the wild, in our cities and in the suburbs; anywhere they can snatch a meal. They are particularly fond of packrats, cottontails, jackrabbits, stray kitty cats and dogs. 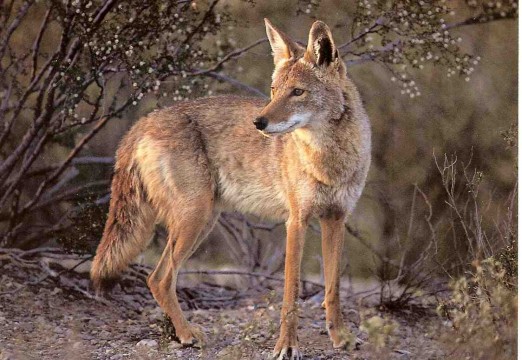 If you declaw your cat and even if you don't, it is best to keep it indoors at all times. Lacking the ability to climb a tree, your cat has no defense against your neighborhood coyotes.

Out here in the foothills of the Tucson Mountains it’s usually very quiet. The most notable exception comes in the middle of the night as ear-piercing screeches of a pack of coyotes squabbling over a possible rabbit kill.

Over the years, I have lost two big male dogs to coyotes and don’t intend to let that happen again. Coyotes are smarter than dogs. Generally, they have two tactics for bringing down a healthy dog. First, if the pooch is foolish enough to chase them, the coyotes will form a relay. The dog will chase one while the others rest. Then another will allow the dog to chase it. Soon, the dog is exhausted and defenseless. The end comes quickly.

Second, the pack sends a female in heat close to the male canine. She then entices the unsuspecting lothario toward where the rest of the pack is hidden in ambush. Three or four coyotes can eviscerate a large canine in seconds.

Ranchers have tried to decimate the coyote population for more than two centuries. As a teenager, I worked on my father’s cattle ranch in Eastern Oregon. The alfalfa growers had killed almost all the coyotes, mostly by poison. The result: a huge explosion in the rabbit population. And what do rabbits love more than anything? You guessed it. Alfalfa. In the summer of 1963, the alfalfa crops were being decimated by what seemed like millions of rabbits.

Part of my job was to go out into the fields every evening after work and shoot as many rabbits as possible: usually 20 or more a night. The same pattern occurred here in Southern Arizona. Apparently farmers have become a bit more enlightened since they now mostly leave coyotes alone.  (Wish we could say that about the now nearly extinct Mexican gray wolf.) 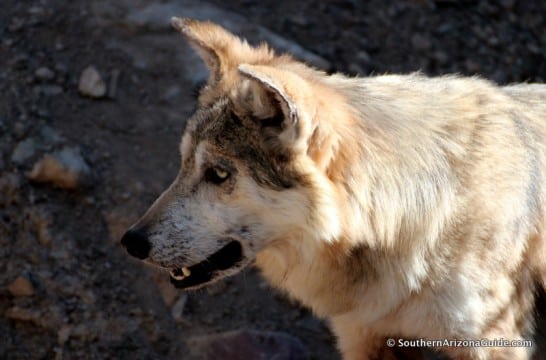 We too have become more enlightened. Every creature has a purpose in the ecosystem.  Our attitude is that they were here first and we are the intruders.

We won’t kill our native critters, except under the most extraordinary circumstances. When I say “we”, I can’t include Buddy, our Sonoran Devil Dog. There’s nothing Bud likes better than chasing packrats and rabbits. And if he catches one, he will kill it. So far, our efforts to enlighten him have failed.

(Should you be curious about our unique Sonoran Devil Dog, click HERE.)

We won’t even kill a rattler, even though Bud finds six or seven in our gardens every year. We have a 48-inch professional snake-grabber that we use to relocate the wayward beasts down to a nearby wash and away from the road. Upon release, we politely but firmly tell each snake not to return. To our knowledge none has, even though they are known to be territorial.

(Speaking of critters that inhabit our Southern Arizona neighborhoods,Here is a very insightful and well-written book entitled: There's a Bobcat in My Backyard. This is an Arizona-Sonora Desert Museum Guide written by Jonathan Hanson. Highly recommended.)