Law of Necessity by James Rhodes is an historical fiction about the Bisbee Deportation of 1917. Warning. Published in 2013, this book is only available as an eBook or Kindle book. For some of us that might be a problem.

The subject of the Bisbee Deportation has fascinated me for some reason. Law of Necessity is the second historical fiction about the deportation that I have read. It was written from a totally different angle than the first one that I read, Bisbee '17.  Bisbee '17, published in 1999, portrays Orson Mc Crae as a malleable patsy, and Sheriff Harry Wheeler as a no nonsense guy who is manipulated by the corporations to believe that Germans have a hand in all this labor strife to stop copper production and thus cripple the war effort.

On the other hand Law of Necessity portrays clearcut heroes (Blue-Blooded Loyalty Leaguers) and villains, (the Wobblies). Law of Necessity barely mentions the corporate characters, Greenway and Douglas, except once. So pay attention.

Wikipedia defines the "Law of Necessity" as: Defendants seeking to rely on this defense argue that they should not be held liable for their actions as a crime because their conduct was necessary to prevent some greater harm and when that conduct is not excused under some other more specific provision of law such as self defense. In this book, this was clearly the case, although in both books there is something else afoot that is only alluded to, never proven.

If you have not read the Review of Bisbee '17 or do not know the history of the Bisbee Deportation which took place one hundred years ago this year, here is a synopsis of the facts to the best of our knowledge.

Bisbee was a corporate copper mining town. Copper was at its peak price due to the US involvement in WWI. On July 12, 1917 around 1200 men were rounded up, detained and deported from Bisbee to New Mexico against their will. Mot of them were Wobblies and Union Men, but some of them were innocent bystanders. This was clearly against the law. This was kidnapping and false imprisonment. No one was ever convicted of this crime.

Some who were deported were just in the wrong place at the wrong time. The intention was to deport members of The IWW, also known as the MMW, or Wobblies. It  was made up of a group of Union Organizers, dissidents and foreigners, who were clearly instigators in a strike that was called but never voted on.

Two men died in the deportation action: Orson McCrae, a shift boss and a member of the Loyalty League, loyal to corporation, and country; and Jim Brew, a local member of the IWW.

Many IWW heavyweights came to town to work the strike effort, including Stuart Embree, who would be tried in Tucson for inciting to riot; hardware store owner, Henry Wootton for illegally detaining Fred Brown, a MMW member. Both were acquitted within minutes. You can read more about the facts of the deportation from the Arizona Memory Project of Cochise County.

The "facts" that are still debated are: What was the corporate involvement that led up to rounding up these union men of Bisbee and shipping them off to the next state ?

In Bisbee '17, Orson McCrae is portrayed as a wimpy follower whom the leaders of Phelps Dodge Corporation have manipulated into carrying out their will, acting as a leader for the loyal workers. 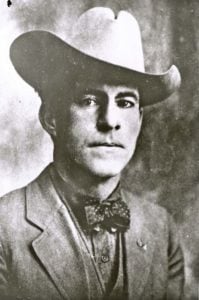 In Law of Necessity, Orson McCrae is a tall, strong, blue-blooded loyalist who takes no guff from anybody. Harry Wheeler, the sheriff and a card carrying blue-blood, is the protagonist and hero of Law Of Necessity.

I have to say, that after reading both of these books, Law of Necessity, develops characters that we care about. Nationalism is in full swing. Sheriff Harry Wheeler is a hero as is the doomed Orson McCrae, a shift boss.

Bisbee '17 focuses on relationships which may or may not have existed between love interests and mostly from the dissidents point of view. No great love for Wobblies in either book here.

Jim Brew, the other doomed character who shoots McCrae, is a bit on the crazy side. Corporate loyalists are not painted in a positive light.

Both stories carry a lot of truth. Both stories are compelling. From the real accounts leading up to the deportation, there was much intimidation but little violence. Both Bisbee '17 and Law of Necessity portray much more violence than has  been widely reported. Both books report stashes of dynamite and guns. The guns were for for the deportation. Where did the dynamite come from? Did corporate loyalists bring it in and blame it on the opposition? Did the opposition bring it in to intimidate the residents?

The truth, I am sure lies somewhere in between. Perhaps the whole thing was manipulated by German sympathizers. Perhaps it was organized by Corporate interests. Perhaps the dominoes just happened to fall in that order.

Here is my reading list.
Bisbee '17 by Robert Houston
Law of Necessity by James Rhodes
Forging the Copper Collar by James Byrit is an effort to get my mind around what "facts" are known.
Bisbee '17 is now a documentary Movie first aired on POV from PBS Passport Videos and can be streamed with a subscription to AZPM (Local PBS).

PS. You can also check with the  Bisbee Mining and Historical Museum. in Bisbee, AZ.