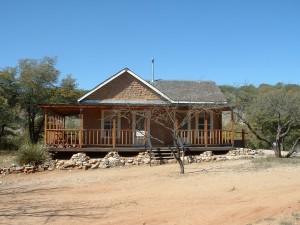 Restored ” Rooms With a View Cabin”

More than a hundred years ago, Kentucky Camp was the headquarters for the Santa Rita Water & Mining Company, which was formed to extract placer deposits from the Greaterville Mining District in the foothills of the Santa Rita Mountains 9 miles NW of Sonoita.
Gold, in the form of placer, was discovered here in 1874. Placer is a mixture of gold, sand, and gravel. Separating out the gold required water. But in the Greaterville Mining District, there was no permanent surface water, and the arroyos were usually dry.
Early on, miners here had to haul their pay dirt in sacks to the few running streams in the area or haul bladders of water to their claims on the backs of pack animals.
At first, this laborious effort was worthwhile, but by 1886 the easy pickings played out and most of the miners moved on.
In 1902, along came James Stetson, a California mining engineer who had an idea to solve the water problem. He believed it would be possible to collect seasonal runoff into a nearby reservoir, creating a permanent water source, and thus making placer mining once again profitable.
Stetson sold the idea to investors and together they formed the Santa Rita Water & Mining Company. The mining operation took place in Boston Gulch and the company built facilities in neighboring Kentucky Gulch.
From 1902, the company had their headquarters and employee residences in what became known as Kentucky Camp. By mid-1904, the company had begun hydraulic mining and success seemed assured. Read More

One Fateful Day
However, as so often happened in these early mining ventures, fate intervened. On May 20, 1905, Mr. Stetson was in Tucson for a Board of Directors meeting. He had taken a third-floor room in the new and very prestigious Santa Rita Hotel, located at Broadway & Scott.
Around 3 o’clock that afternoon, a maid working on the 2nd floor directly below Mr. Stetson’s room heard a thud on the windowsill of the room she was cleaning. She went to investigate. As she leaned out her window, she saw Mr. Stetson’s dead body on the concrete sidewalk below.
Why Mr. Stetson fell out of his hotel window was never determined. Was he pushed? Was he drunk? We will never know.
The remaining partners tried to keep the mining operation going but gave up in 1906. By 1912, Kentucky Camp was abandoned.
After a series of owners, the U.S. Forest Service acquired Kentucky Camp in 1989 and made it part of Coronado National Forest. Since 1991, the Forest Service and the many Friends of Kentucky Camp have endeavored to preserve the old buildings for posterity.
Five 1904-era adobe buildings survive on the Kentucky Camp townsite today.

The largest of these was probably the Santa Rita Water & Mining Company’s headquarters. Later, it would be a ranch house when this area transitioned from mining to cattle ranching.
There is a small building behind this large one that almost certainly, given the liners of the assay furnace, was used for processing gold samples. There’s a small adobe cabin that was probably Stetson’s residence, another small adobe house that may have been a miners’ residence, and the ruins of a barn.

Lodging
Through the Forest Service’s “Room With A View” program, you can overnight at Kentucky Camp for a small fee.
The small cabin that was probably Stetson’s residence and the 10-room headquarters building have been restored for public use. If you’re looking for a place to “get-away-from-it-all”, Kentucky Camp would make a very good choice. No light pollution. No noisy (human) neighbors. No traffic.
To preserve the privacy and tranquility of the visitors’ experience, guests renting the headquarters for day use automatically have use of the cabin the night before and the night of the day use. A caretaker is usually available on-site to greet the public and answer questions. However, this is a volunteer position and the caretaker may not be there at all times.

For $75 per night, the small, 3-room cabin can accommodate 5 people for overnight stays. It includes:

For $200 per day, the headquarters building can accommodate up to 50 people, day use only, and includes: two futon couches, a large dining room/conference table with eight chairs, a smaller table, bookcases, end tables, rocking chairs, and reading lamps. The small kitchenette has a refrigerator, microwave, coffee pot, crock pot, and some dishes and utensils. There are five Adirondack chairs and a small table with benches on the wrap-around porch. Also outside are picnic tables, propane and charcoal grills, a sink, and a vault toilet.
The $200 day fee includes overnights in the cabin the night before and the night following the day use of the headquarters. 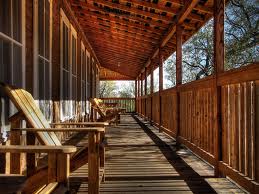 How To Get To Kentucky Camp
Kentucky Camp is located about 45 miles southeast of Tucson, Arizona. It is accessible by sedan, but a high-clearance vehicle is recommended. The last 5 miles involve travel over dirt roads, which can be slick when wet. For information on current road conditions, visitors can contact the Nogales Ranger District at (520) 281-2296. Be mindful that this road is a favorite of ATVers.