Continuing our ranking of the 10 Best Steakhouses in Tucson, Ms. Karen, Neighbor Roy, & I moseyed off to Daisy Mae’s Steakhouse near the West Campus of Pima Community College for an early Sunday dinner.

Daisy Mae’s opens for dining at 4 PM. We arrived at about 4:30 and hardly anyone was there. However, as we were leaving an hour later, the place was filling up quickly.

Antonio, a quiet, unassuming lad, took our drink orders. Ms. Karen had a glass of pinot grigio ($5.50). I had a Cadillac Margarita /rocks & salt ($7). And Neighbor Roy, hard-drinking cowpoke that he is, had a Sarsparilla topped with a maraschino cherry ($3).

Checking out Daisy Mae’s menu, it was apparent that they offer a huge variety of beers, including my favorite, Nimbus Old Monkeyshine Ale. As to their wine selection, Daisy offers just a couple of pathetic cheap wines. I guess they know their clientele.

As we sipped on our cocktails, we had the opportunity to look the place over. Definitely nothing fancy. Daisy Mae’s will not be confused with Fleming’s. 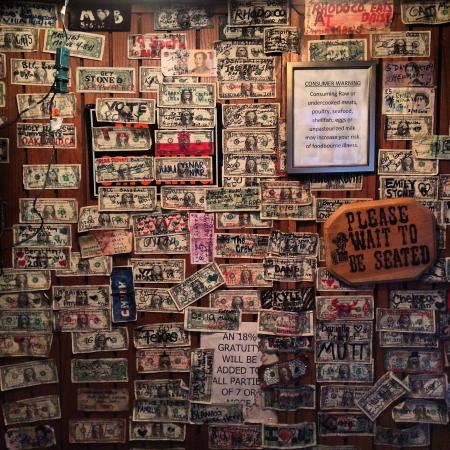 Once seated in the dining room, it is impossible not to notice that the walls and ceiling are covered with one-dollar bills that had all been defaced with ink or magic marker. (Is that illegal?) According to Antonio, these thousands of one-dollar bills are removed from the walls and ceiling about every decade and given to some worthy charity. Antonio explained that the last time this was done, they had collected over $2,000 and gave it to the foundation that helps the 911 First Responders. So we wrote: “SoAzGuide was HERE!” on two one-dollar bills and stapled them to the wall next to our table.

The other item one notices upon being seated in the dining room is the enormous BBQ pit just outside on the patio. Like Silver Saddle Steakhouse, Daisy Mae cooks her meats over a very hot mesquite fire.

I inquired of Antonio if Daisy seasons her steaks and, if so, what seasoning do they use. He didn’t know, but wandered off to the kitchen to inquire. A few minutes later, he returned and told us they use “Larry’s” seasoning.

Antonio immediately noticed our quizzical expressions. Ms. Karen ventured a guess. “Do you mean “Laury’s Seasoning?” she asked. “Yes, I think so,” replied Antonio. Ms. Karen then decided to take this scintillating conversation to the next level. “Laury’s make many different types of seasoning,” she pointed out. “What type of Laury’s seasoning do you put on your meats?” Antonio admitted that he didn’t know. Moreover, his body language conveyed the message that he didn’t really care either. 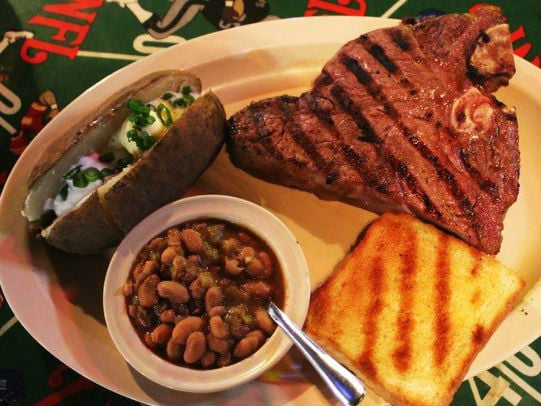 A few minutes later, Antonio delivered our salads, such as they were. Perhaps the best description of our Daisy Mae salads would be “minimal”. A small bowl of crisp cello lettuce; a sliver of carrot; a thin slice of cucumber. And one cherry tomato. And we thought the salad bar at Silver Saddle was underwhelming.

No matter, it was now time for our steaks, baked potatoes and beans. Mind you, all of this was served on hard plastic dishes and bowls reminiscent of an elementary school cafeteria with cheap eating utensils to match.

The Verdict
Said Neighbor Roy, “My 18 oz. T-Bone was done to perfection. Very flavorful. I enjoyed my large baked potato. And I loved the beans. However, the garlic toast was just OK.”

Said Ms. Karen, “My 9 oz. filet mignon was very good, but not as good as the one I enjoyed at Flemings.” She also commented favorably on the beans, although I thought just about any can of Bush’s Beans would do as well or better.

As to my Ribeye, it was quite tasty. I shared a bite or two with my dining companions and they agreed … “Very good!” Just not quite as good as the one I enjoyed at Flemings … but half the price. More importantly, it was not quite as flavorful as my ribeye at Silver Saddle. I agreed with Roy about Daisy Mae’s garlic toast. Just so-so! Even I could have easily produced a better garlic toast.

That said, we should point out that while our dinners at Fleming’s Steakhouse was very good, the tab came to $90 per person not including tip. Our dinners at Daisy Mae’s averaged a mere $40 per person.

Conclusion
Daisy Mae Steakhouse has good steaks, not great. The service is good, not great. The salad that came with the entrée was pathetic. And don’t bother with the garlic bread. It would be so easy and inexpensive to up Daisy Mae’s game with a little imagination and effort, but … Daisy Mae’s Steakhouse will NOT be invited to advertise on our Southern Arizona Guide because we cannot wholeheartedly recommend this establishment to our friends and family. Ms. Karen summed up our Daisy Mae experience. “It was OK, but I don’t see any reason to go back unless you don’t have a barbecue grill.”