On a 3 day Road Trip through SouthEastern Arizona, we stopped at a few ghost towns, namely Pearce, Courtland, and Gleeson along the Ghost Town Trail. These are all located near Sunsites east of Tombstone. 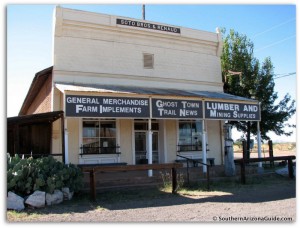 Pearce, AZ
Pearce was a mining town named for miner and rancher, James Pearce. He discovered gold nearby and established the Commonwealth Mine in 1894. The Pearce Post Office was opened in 1896. The railroad station opened in 1903.

The Commonwealth Mine became one of Arizona’s major silver producers. The mine produced about $8 million worth of silver and $2.5 million in gold at a time when silver was priced around 50 cents an ounce, and gold was $20 an ounce.

Pearce is the home of two properties on the National Register of Historic Places: the old Pearce General Store, which opened in 1896, and Our Lady of Victory Catholic Church. There are a number of other historic structures in and around Pearce, some still in use, but mostly ruins.
The General Store is now closed. Possibly for good. Prickly Pear Emporium appears to still be open from time to time. Marcia's Garden is closed for good.

From Pearce, you can take the Ghost Town Trail Road (unpaved) south to Courtland and Gleeson. It’s a pretty drive through Old West history. 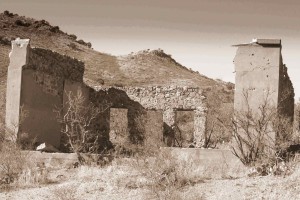 One of the ruins at Courtland, Arizona

Courtland, AZ
Like all the old towns in this part of the country, Courtland was a rough and ready mining town. At one time it had about 2,000 people living here, and two newspapers, 5 miles of water mains, and a theater.

As elsewhere around here, the mines wore out in the 1940s and the population moved to better pickings. There are still ruins here worth visiting. The graveyard has been cleaned up and fenced as of 2019. Visit the Courtland Facebook page here. 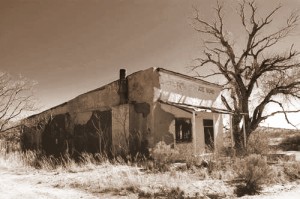 Gleeson, AZ
Around 1900, Gleeson was a copper mining town of about 500 people. The most prominent structure today is the old jail, but there are many other ruins.

The fire of 1912 burned down most of the town, which was quickly re-built. The mines wore out in 1940 and Gleeson became a semi-ghost town.

Local Joe Bono now owns the Gleeson Jail in which there is a small museum open to the public usually on the first Saturday of each month. For more information: http://www.gleesonarizona.com.  Find a list of Ghost Towns and articles here.