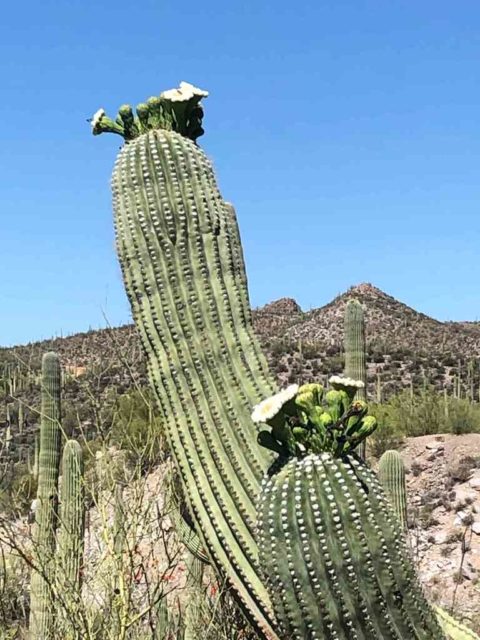 By Contributing Writer
RJ Brenner
If you read my post last week , you’ll remember that I’m an avid hiker and wrote about hitting Tucson’s trails to enjoy the peak blooms of wildflower season. This week, my sights are set on the mighty Saguaro cactus. If you didn’t already know, the Sonoran Desert is the only place in the world these giants grow.

I relocated to Tucson eight years ago for a job at the Arizona-Sonora Desert Museum and immersed myself in the Natural History of the Sonoran Desert 101 — and learned that saguaros don’t get arms until they are about 70 years old.  While that’s not news to most Tucsonans, my curiosity about saguaros surged from day one.

Have you ever wondered, why trees have limbs or branches, but saguaros have arms? And speaking of arms, you’ve probably noticed that most saguaro arms grow off the central trunk. That launched my search for saguaros with arms growing from arms. Why is that a rarer occurrence? No one seems to know. As I discovered, there are a great many unanswered questions about saguaros.

While working at the Desert Museum, Don Swann, a biologist at Saguaro National Park (SNP) hosted a brown bag lunch sharing recent research findings about saguaros. Keep in mind, ‘recent’ was at least five years ago. But I met with Swann again recently, and he confirmed that the following bits are true.

Have you ever noticed that the skin (not bark) of a Saguaro is covered with a pattern of spines called rosettes. It is from these rosettes that saguaro flowers bloom. (June) Here’s the fun part … if for some reason a rosette doesn’t bloom, that’s where an arm will grow. But only if it never flowers! Why? No one knows. 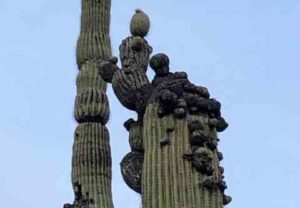 Every Monday, Sentinel Peak (A-Mountain) is closed to traffic and that’s where I head with a few friends (Bandana Brigade). We noticed something odd about many of the saguaros on the south face — their arms appeared stunted, resembling stacked bumps rather than true arms.  Being curious, I checked in with Swann at SNP.

According to an article published in the Cactus and Succulent Journal (2010 Vol. 82 No. 5) he provided to me, there are three regional areas where these aberrant saguaros may be found.  Based on the geographical locations and similarities between them, it has been suggested that the odd constrictions may be caused by environmental factors. One particular collection is located in washes near mining activities and the other two are adjacent to fireworks display sites. While it is not known for sure, the cacti’s odd growth pattern may be somehow attributable to these factors. 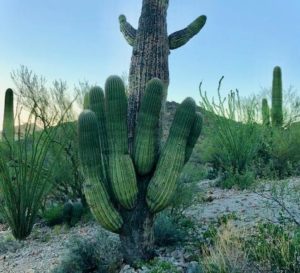 Hiking the Wren’s Rock trail from the Genser Trailhead off Starr Pass, I discovered a cluster of saguaros with arms growing out of the base of the cactus, instead of the usual location about mid-way up the main trunk.  I asked Swann about these curious characters. When I showed him pictures, he seemed stumped and said he’d never seen any like that before. Since then, I’ve begun to pay even more attention and discovered another grouping along the Homestead Trail in Sweetwater Preserve.

I hope these factoids  pique your interest in the mighty saguaro as well. Happy trails everyone!

Editors Note: For more about the Saguaro, see our video on the Saguaro from a docent at the the Arizona-Sonoran Desert Museum.