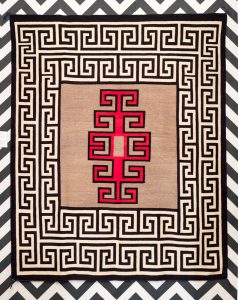 One of many Navajo “eyedazzler” style rugs on display.

Those of us who live in the vastness of the Sonoran Desert share this land with two sovereign nations: the Republic of Mexico and the Tohono O’odham Nation.

The Tohono O’odham Nation is the second largest American Indian reservation in the United States: 4,344 square miles. The largest belongs to the Navajo: a whopping 27,000 square miles, including a large chunk of Northern Arizona, and smaller pieces of New Mexico and Utah.

The Tohono O’odham never suffered the ravages of war with the United States. But the Navajo did. When Americans invaded their territory, the Navajo fought with everything they had.

Unlike the marauding Apaches, the Navajo were primarily a settled people. By the mid-19th century, they raised extensive crops, particularly corn, beans and squash. They also cultivated fruit orchards and raised sheep and goats. The Apaches only used sheep for food. While the Navajos enjoyed an occasional good lamb chop dinner, they also bred their sheep for wool from which they made exquisite blankets, and much later, rugs. Churro sheep they got from Spanish conquistadors in the mid-1500’s were highly prized for their fine wool.

The Navajo’s practice of spinning and weaving wool into blankets and clothing became common in the 18th century. By the late 19th century, when their textile skills turned more often to rugs, it developed into a highly prized form of artistic expression. 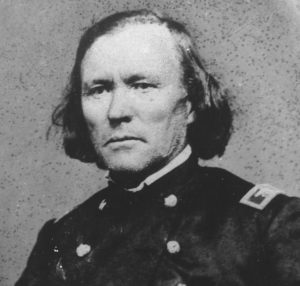 Col. Kit Carson. Mountain Man; Indian Fighter. Illiterate, but fluent in both French and Spanish, as well as Apache, Comanche, Cheyenne, Arapaho, Crow, Blackfoot, Ute and Dine (Navajo). He had two Indian wives, lived and traded with the Indians and was considered one of the best and fairest of Indian agents. For 25 years, he and his third wife lived in Taos, NM. In 1868, she died giving birth to their 8th child. Grief-stricken, he died a month later. As Western heroes go, Mr. Carson is not much loved by the Navajo.

By 1861, the Navajo had been fighting the invaders for 15 years. In that year, General Carleton, Commander of the Federal District of New Mexico ordered Colonel Kit Carson to conduct a scorched-earth campaign and force the Navajo to surrender. Carson and his forces marched through Navajoland like Sherman would soon March to the Sea. They killed or captured all the Navajos they came across and destroyed their dwellings, crops and livestock.

Facing starvation and death, the last defiant Navajos surrendered at Canyon de Chelly (pronounced “shea”) in July 1863. The next spring, about 2,400 Navajo men, women, and children were force-marched over 300 miles to Fort Sumner, New Mexico and interred at Basque Redondo. That episode is known today as “The Long Walk”. Many died along the route. Eventually, 8,000 Navajo were prisoners in the Basque Redondo concentration camp.

Basque Redondo was a disaster for the Navajo. Although promised, the U.S. government failed to provide sufficient nutritious food, clean drinking water, clothes, blankets, shelter, and live stock for thousands of Navajos. Diseases killed hundreds every year, particularly the small children. Conflicts with Mescalero Apaches and white settlers killed hundreds more. Over the next 4 years of their confinement, one in four Navajo died due to malnutrition, exposure, and disease.

Canyon de Chelly & Canyon del Muerto where the Navajo fought their final battle with U.S. Army forces led by Col. Kit Carson. Here as elsewhere, Carson and his troop destroyed the Navajos’ crops, orchards, and livestock, forcing them to surrender or starve to death.

When the surviving Navajo were allowed to return to their ancestral homeland in the Four Corners area, they found little of use. Their crops and herds and been destroyed. Lacking their own sheep, the Navajo women could no longer dye, spin, and weave their own yarn.

However, by this time, the Santa Fe Railroad could deliver synthetically-dyed commercial yarns from the East Coast to the trading posts on or near the Reservation. From Germantown, PA came the best yarn with the full spectrum of colors not found in the Navajos’ natural world.

Moreover, a confluence of events, the trauma of the Long Walk, the suffering and death at Bosque Redondo, and suddenly the easy availability of vivid commercial yarn, resulted in an innovative, highly expressive weaving style called “Eyedazzler”.

The Optical Effect Is Uncanny

To look upon this style of textile is to believe that the weavers were so skilled that they wove movement into vibrant artistic masterpieces. As one who has now witnessed these phenomena, I can truly state that the optical effect is simply uncanny.

Today (February 2017) you, too, can witness the evolution of the brilliant eyedazzler style in historic rugs, blankets, and serapes at Tucson Desert Art Museum.
The Dazzled Eye: Navajo Textiles from the Getzwiller Collection
January 13 – May 28, 2017
This exhibit features Navajo eyedazzlers and optical textiles from world renowned collectors Steve and Gail Getzwiller, The Dazzled Eye contrasts these works of woven art with American Op Art and explores the popularity and history of Navajo eyedazzlers and optical textiles.