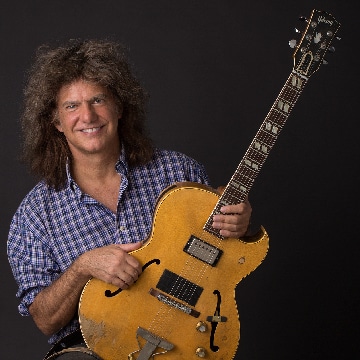 Receiving great acclaim for his recent classical guitar album Road to the Sun, Metheny is set to dive back into his beloved trio format. The guitar guru has created a new musical platform consisting of a continuously changing line-up of aspiring young musicians — his evening at The Fox will see Pat joined onstage by James Francies (keyboards, piano) and drummer Joe Dyson. The trio will be performing music from across Metheny’s massive career as well as new material unique to this live band.

Calling this new playing environment “Side-Eye,” Pat explains “I wanted to create an ongoing setting to feature new and upcoming musicians who have particularly caught my interest along the way.” Pat continues “From my earliest days in Kansas City onward, I was the beneficiary of so many older musicians giving me a platform to develop my thing through the prism of their experience, now I have a specific platform to focus on some of the many younger musicians I felt some kind of a kinship with.”

Metheny's versatility is nearly without peer on any instrument. Over the years, he has performed with artists as diverse as Steve Reich to Ornette Coleman to Herbie Hancock to Jim Hall to Milton Nascimento to David Bowie. Metheny’s body of work includes compositions for solo guitar, small ensembles, electric and acoustic instruments, large orchestras, and ballet pieces and even the robotic instruments of his Orchestrion project, while always sidestepping the limits of any one genre.

Over the years, Metheny has won countless polls as "Best Jazz Guitarist" and awards, including three gold records for (Still Life) Talking, Letter from Home, and Secret Story. He has also won 20 Grammy Awards spread out over a variety of different categories including Best Rock Instrumental, Best Contemporary Jazz Recording, Best Jazz Instrumental Solo, Best Instrumental Composition at one point winning seven consecutive Grammies for seven consecutive albums.
Metheny continues to be one of the brightest stars of the jazz community, dedicating time to both his own projects and those of emerging artists and established veterans alike, helping them to reach their audience as well as realizing their own artistic visions.