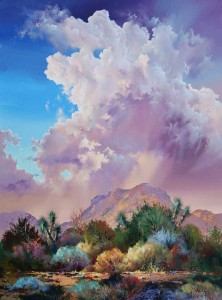 Painting by Doug Oliver, featured artist at the 2105 Empire 100.

March 29, 2015. Jim and I wandered off into the Eastern hinterlands (East of Campbell) to peruse the offerings of the Empire Ranch Foundation for its Annual Western Art Show and Sale. In its 15th year, this year the show is at the tony Tucson Desert Art Museum.
Dubbed the Empire 100 for the number of paintings which are on exhibit, the sale is a benefit for the preservation of the Empire Ranch and the Cowboy way of life.

We had arrived shortly after 2pm for the opening reception. Our early arrival turned out to be our good fortune. One hour later, the line was long and the place was packed. Three paintings already had sold stickers on them. By 3 o’clock it was standing room only. The artwork is decidedly Western in subject material, many with a cowboy theme, others flowers, fauna and landcapes. Doug Oliver is the featured artist for 2015 showing four landscapes. The exhibit is only showing through April 19th.
For a slideshow and to learn more about the Empire Ranch click here.
Postscript: Next door to the Empire 100 exhibit is the Four Corners Gallery where “Monumental” Landscapes by Arturo Chavez are on exhibit through the end of the month. Juxtaposed alongside are large format, monumental photographs by Scott Baxter, a must see.