The Gunfight at the OK Corral in Tombstone was only the beginning of the murderous conflict known as the Wyatt Earp Vendetta Ride, between Wyatt Earp, his brothers and their friends, known as the 'Posse' and the outlaw gang known as 'The Cowboys'. 'The Cowboys' were about two-dozen hard riding, hard drinking ranchers and rustlers, their hired hands and gunslingers. Most notable among them were the Clanton Brothers, Ike and Billy; the McLaury Brothers, Frank and Tom; Johnny Barnes; “Curly Bill” Brocius; Florintino Cruz, aka “Indian Charlie”; Frank Stilwell; and Johnny Ringo.

The Gunfight on Fremont Street

Facing the well-armed Earps and Holliday’s shotgun, Ike Clanton and Billy Claiborne had the good sense to run. And then the killing began. When the gunfire started, witnesses say the opposing parties were no more than 18 feet apart. In roughly 30 seconds about 30 rounds were fired. When the dust cleared, Frank McLaury lay dead in the street. Tom McLaury and Billy Clanton lay dying. Morgan and Virgil Earp were wounded, but survived.

Shortly thereafter, Ike Clanton filed murder charges against Holliday and the Earps. After a month-long preliminary hearing, they were exonerated. But that was by no means the end of the killing.

The Rest Of The Story 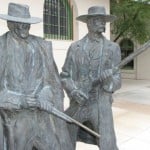 The rest of the story takes place a few months later in late 1881 and early 1882 between the saloons, billiard parlors, and dusty streets of Tombstone and the Southern Pacific Train Depot in downtown Tucson.

The gunfight on Fremont Street, the one that became known as the Gunfight at the OK Corral, took place on October 26, 1881. Everyone knew that Ike Clanton and the Cowboys would try to avenge their dead comrades. Two months later, on the night of December 28th, some of the cowboy gang ambushed Marshal Virgil Earp, badly wounding him in the torso and left arm. He survived but never regained the use of his arm. Witnesses saw Ike Clanton running from the scene. In the area where the ambushers had struck, Wyatt found a hat in the alley with Ike's name on the interior band. 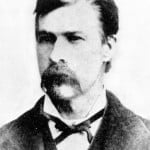 Two and half months later, on March 18, 1882, Morgan and Wyatt were in a billiard parlor on Allen Street playing pool when a bullet barely missed Wyatt’s head; and another bullet ripped through Morgan's abdominal organs and shattered his spine, leaving him dying in his brother’s arms. Witnesses identified Frank Stilwell, a livery stable operator, some-times sheriff’s deputy, and occasional stagecoach robber, as one of the assassins.

Morgan’s last wish was for Wyatt to avenge his murder.

And that’s what Wyatt did. Under the circumstances, he had to make a choice. He could stay within the law while the cowboys hunted and killed him and the remainder of his family or he could become the hunter and track down and kill those who had wounded Virgil and assassinated Morgan. Wyatt chose family over the law.

The Gunfight at the Tucson Train Depot

The beginnings of what would become known as the Wyatt Earp Vendetta Ride started at the Southern Pacific Railroad Depot in downtown Tucson. Read more about the Posse of Vendetta Riders here.

Fearing the Cowboys would try again to kill Virgil, now U.S. Deputy Marshall Wyatt Earp, his youngest brother, Warren, plus Doc Holliday and two others members of Wyatt's federal posse accompanied Virgil and his wife, Allie, as they rode in a wagon from Tombstone to the train depot in Contention, the closest rail head to Tombstone. From there, the party took a train to Benson and then on to Tucson.

The plan was to put Virgil and Allie on a train in Tucson bound for their parent’s home in Colton, California where they had shipped Morgan’s body and where, hopefully, Virgil and Allie would be safe. 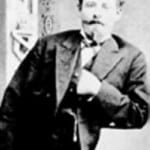 But on the night of March 21st, 5 months after the Gunfight at the OK Corral, Wyatt got a tip that Ike Clanton, Frank Stilwell and some other Cowboys were waiting at the depot to assassinate Virgil.

Moments after Virgil and Allie had boarded the train, Wyatt spotted Clanton and Stilwell lurking in the dark armed with shotguns. Inside the lighted coach, Virgil and Allie were easy targets.

Wyatt pursued the pair on foot and Clanton, as he had done at the OK Corral, ran. But Stilwell’s luck ran out. He tripped and fell. When he got up, Wyatt was only a few feet away. Wyatt killed him with two blast of his double-barreled shotgun at point blank range.

Wyatt then walked up to the coach in which Virgil and Allie were seated and through the window told his older brother, “ One for Morgan”. 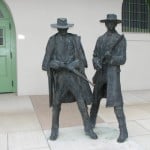 Today, at the Train Depot, you can see life-size statues of Wyatt and Doc, shotgun and rifle ready, at the spot were Frank Stilwell’s body was found the next morning.

Frank Stilwell was only the first to die. Within the four months after Morgan Earp was murdered, Stilwell, Johnny Barnes, “Curly Bill,” “Indian Charlie”; and Johnny Ringo were dead. For a map of Wyatt Earp's Vendetta Ride see this page.

The Death of Wyatt Earp

Following the Vendetta Ride, Wyatt and his girl friend, Sadie Marcus, moved from place to place in Colorado, Idaho, California, and even Alaska where they prospected, operated saloons, and gambled.

Ever one to flaunt convention, Josie didn’t agree to marry Wyatt until the 1890’s. In their 46-year relationship, they never had a permanent home. For nearly half a century they traveled and gambled and did mostly whatever they wanted in their never-ending search for quick riches.

They were vagabonds but very different personalities. She, the spoiled daughter of wealthy San Francisco parents, was willful and exuberant. He was a serious, deliberate man.

In 1901, Wyatt sold his interest in an Alaskan saloon and he and Josie headed for the next big mining boomtown, Tonopah, Nevada. As he had done so many times in the past, Wyatt dealt faro and soon became U.S. Deputy Marshall, this time for the District of Nevada. They never did strike it rich. 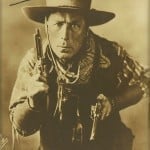 Wyatt Earp died in a Los Angeles hotel room in 1929 at the age of 80; nearly broke. He had had a long and colorful life. He had tried for years to sell that life story to Hollywood without success.
Yet, among the pallbearers were two of Hollywood’s greatest silent screen cowboy stars, William S. Hart and Tom Mix.

Armchair historians have argued for over a century about how many of the Cowboys Wyatt killed. But there is no doubt that Wyatt killed Stilwell at the Tucson Train Depot. In an interview in the Denver Republican, May 14, 1893, Wyatt told the reporter:

“I went straight for Stilwell. He killed my brother. What a coward he was! He couldn’t shoot when I came up to him, but just stood there, helpless and trembling. As I rushed to him he put out his hands and clutched at my shotgun. I let go both barrels, and he fell dead and mangled at my feet. I started for Ike Clanton then, but he disappeared behind a moving train of cars.” 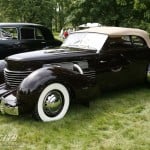 The Death Of Tom Mix
One of Wyatt’s pallbearers, Tom Mix, the rich, famous, and handsome star of silent westerns, died in an accident north of Tucson.

Before the completion of I-10, Arizona State Route 79 was the main highway between Tucson and Phoenix. Now it’s considered the back road and is far more interesting than the Interstate. On an October afternoon in 1940, Tom Mix was driving his 1937 Cord 812 Phaeton near Florence doing 80 mph. He swerved to miss a road repair crew and ran off the road into a wash.

He had stashed a large aluminum suitcase packed with lots of cash, traveler’s checks, and jewels in a shelf behind the driver’s seat. The force of the impact caused the heavy suitcase to slam into the back of Tom’s head, breaking his neck. He died almost instantly. The Cord sustained little damage. 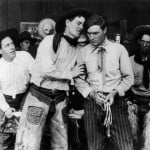 Today, you can see a stone marker along the side of Route 79 just south of Florence, AZ commemorating the spot where Tom Mix died. The inscription reads; “In memory of Tom Mix whose spirit left his body on this spot and whose characterization and portrayals in life served to better fix memories of the old West in the minds of living men."

Learn more about the sights of Tombstone on our "Things to Do in Tombstone" page.