Now that we have a thoroughly Modern Streetcar, I thought it might be interesting to see if we could enjoy our Downtown Tucson entertainment without taking our car, thus avoiding parking hassles and the need for a designated driver.

Our plan was to start at Agustin Kitchen at the Mercado where 7 of us could enjoy a good brunch & good company; then take the streetcar to the Rialto Theater to see NPR 89.1 FM present Dave Fitzsimmons’ “An Arroyo Café Christmas”, an Old Pueblo spoof of Garrison Keillor’s Prairie Home Companion. The show was scheduled to start at 2 PM and be broadcast on NPR Christmas Day.

After the show we planned on having some fancy cocktails at one of our Downtown restaurants. Not having to be the designated driver, I could enjoy a couple of drinks before heading home before dark.

Only one problem. We have no City bus service here in the foothills of the Tucson Mountains. So we decided to do something we have never done since moving here around the turn of the century … take a taxi. But which one? 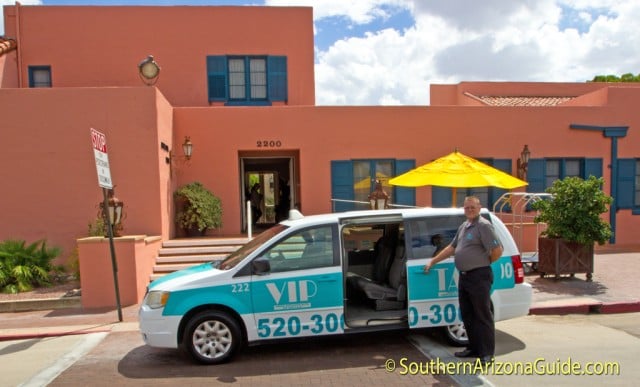 I did a little research and settled on VIP Taxi for several reasons. First, they only drive minivans and full size sedans, such as Ford Crown Victoria. I’m a big guy and won’t fit well into those little green Toyota Prius hybrids we see all over town. Moreover, for walking more than a short distance, I require my electric scooter, so the taxi has to be big enough to accommodate my handicap needs.

Second, VIP Taxi has several modern conveniences, such as:

Third, VIP Taxi has a good “on-time” reputation. Shortly before our taxi was scheduled to arrive, we got a text message telling us that it had been dispatched and then a call from the dispatcher to confirm the location. Very professional. 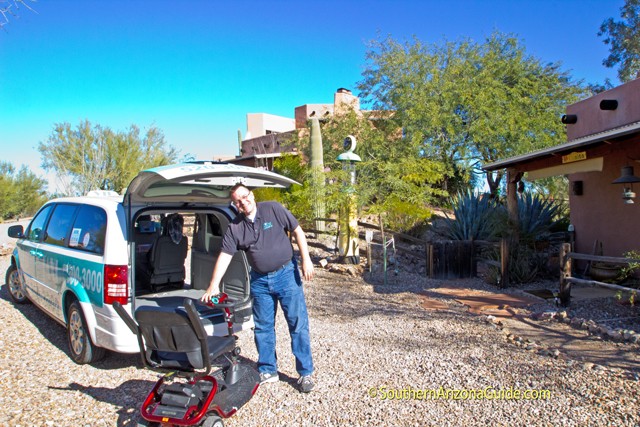 Derik, our VIP Taxi driver, put my electric scooter in the back of the taxi.

Our VIP Taxi arrived a few minutes ahead of schedule. The driver, Derik, said he wanted to be sure he allowed enough time to put my scooter in the back of the van. Once seated inside, we could see that this taxi was clean and in good repair. Derik, ex-military we discovered, was both pleasant and knowledgeable.

We arrived at the Mercado a few minutes before our 11:15 AM reservation at Agustin Kitchen. The place was packed with shoppers enjoying the annual Holiday Bazaar. (Think festive farmers’ market.) Derik retrieved my scooter from his taxi and I maneuvered carefully through the booths & throng of holiday shoppers on our way to the restaurant.

A pleasant brunch at Agustin Kitchen

We very much like Agustin Kitchen. We dine there often and on rare occasion have experienced a meal that wasn’t up to par. But generally, our experiences have been very good. 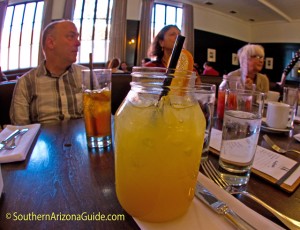 My mimosa in a Mason Jar at Agustin Kitchen.

Ms. Karen ordered a bloody Mary and I ordered a mimosa … both served in Mason jars ($9). HUGE! These are most generous cocktails in town as far as we know.

Once our meals were ordered, I excused myself, walked across the street to the streetcar stop, bought One-Day tickets: $4 each; then passed them out to my dining companions when I returned to our table.

Six of us ordered some form of breakfast. Anne ordered the Green Eggs & Ham and gave it 5-Saguaros – Excellent! Ms. Sue said the same about her breakfast. All the others came in at 4-Saguaros – Very Good. Ms. Karen had the Oysters from Washington State; and proclaimed them, “cold, crisp, delicious.”

When brunch was over, we merely walked across Avenida del Convento to the most westerly streetcar stop on the route. More precisely, my companions walked. I rode my trusty scooter. I knew the streetcar, modern as it is, had a retractable ramp for wheelchairs and such, but I had never used it before.

Me on my electric scooter using the convenient retractable streetcar ramp.

Turns out, our streetcar is very handicap-friendly. When our streetcar came to a stop, I merely pushed a handicap button next to the door and out came the ramp. Easy! Once inside, there was plenty of room for my scooter to maneuver.

Once underway, we experienced something new. Several in our party had taken the streetcar before. But never have we been approached by a streetcar official asking to validate our tickets. I think they do this randomly so that riders don’t become freeloaders. She checked everyone’s ticket and found all were in fact valid for this day.

It was only minutes to the stop nearest the Rialto Theater in the heart of the Tucson Entertainment District. Here we encountered a long line of people waiting to get into the show. At this point I was pleased to note that, for once, I did not have to hunt for a parking space.

While we have enjoyed many performances at the Fox Theater, we had never been to the Historic Rialto. I was curious as to how well it would accommodate my scooter. Many historic buildings in Southern Arizona are not handicap-friendly. It turns out I didn’t have to worry. There was plenty of space in the auditorium for wheelchairs, electric or otherwise. 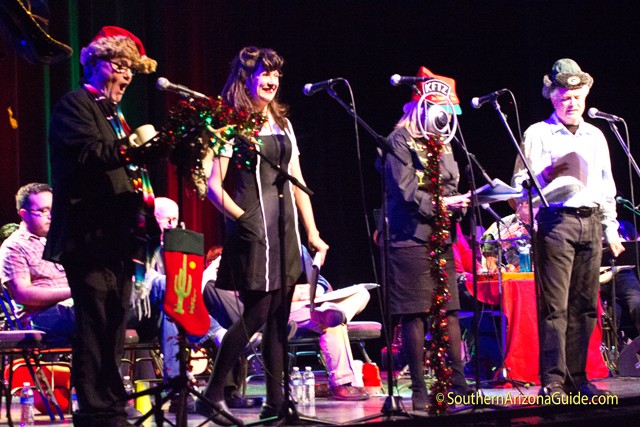 Fitz (left) and the performers for Arroyo Cafe Christmas at the Rialto Theater.

Fitz, whom we have enjoyed in past performances, wrote the script for this radio show and, to no surprise, it was a HOOT! Unfortunately for two in our party who were visiting from Kentucky, many of the funnier lines were inside jokes. You had to live here to get the references to local people, places, and phenomena.

The Rialto isn’t nearly as classy as the Fox Theater, with its magnificent Art Deco interior. Nor are the acoustics as good. The Rialto was, in fact, a bit dark and dreary, and had no permanent seats. But I suppose if someone you really want to see is performing there, this venue would be OK. The seating is foldaway, presumably to make way for other venues, such as dancing.

When the show ended we were all ready for a drink. So we crossed Congress Street and entered the lobby of Hotel Congress where the bartender was just setting up. We like the Hotel Congress, especially the Cup Café. It was built in 1919, the year my 95-year-old was born at St. Mary’s. It’s definitely historic and the best nightclub in Tucson.

Derik, our VIP Taxi driver, had given us his business card. So we called for pick-up about a half hour before we were ready to go home. He was a few minutes early. We finished our drinks, Derik loaded my scooter in the taxi, and were back home before dark. 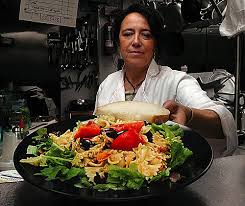 Taking a taxi and the streetcar made this Downtown adventure hassle-free. We’re going to do it again, probably for an upcoming show at the Fox. We particularly enjoy dinner and a show. Thus, on show nights we like to dine at Café Milano only a few steps from the Fox Theater ticket window. But now that Downtown has experienced a renaissance (with more to come), there are many other choices for good eats, such as Hub and Proper.

There is so much to do Downtown now, and you don’t even have to drive. Do we recommend VIP Taxi and our Modern Streetcar? Indeed we do!