Of those who are following our ranking of the best burgers in Tucson, several readers asked that we consider Trident Grill on Speedway near Campbell. Earlier this week I was given a tour of Adobe Rose Inn, a lovely B&B two blocks east of the University, in preparation for an upcoming List of the Best Small Inns & B&B’s.
When I left Adobe Rose, it was lunchtime and I was only a few blocks from Trident. From the exterior, Trident Grill doesn’t look particularly inviting, but that all changed as soon as I walked in. The immediate impression was of a London grill near Trafalgar Square or an Irish pub in Dublin. Very pleasant.
I seated myself in a comfortable booth and was quickly approached by my waitress who handed me their menu and took my drink order. When she returned, I asked if their hamburgers were any good.

“They’re alright,” she told me, “but we’re mostly known for our great fish & chips.” I love a good fish ‘n chips. The 2 best I’ve had in Tucson were at Metropolitan Grill on North Oracle and Nimbus Bistro on Tanque Verde. You’ll find both in our List of the Best Restaurants in Tucson & Southern Arizona by type of cuisine. 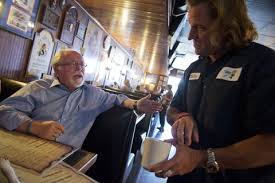 But I was on a ‘burger’ mission. “Fine. I’ll have a burger with cheddar cheese, sautéed mushrooms, and a side of mayo ($7.50). How are your fries,” I asked. Her reply almost knocked me out of my seat.

“Better choice.” And with that she took my order back to the kitchen.

For a moment, I pondered the riddle that she had just created. If Trident’s fish & chips are what’s good here, but the fries are really bad, how … ???

Oh well, never mind. The question at hand is this: Does Trident Grill Have The Best Burgers In Tucson? In a word, NO.

The paddy was OK, but the bun was a bit stale and tasteless and the tomato was bland. And the potato salad? I’ve had better. But I did like the atmosphere. Now if I can just figure out how Trident makes good fish ‘n chips with bad fries.