Editor’s Note: Grimaldi’s in Tucson has closed but there are several in Phoenix to visit.
Six of us ventured to mid-town to see if Grimaldi’s should be on our upcoming List of the 10 Best Pizzas In Tucson.

Having read their website self-description, I was particularly interested in their oven. They claim that a “coal fired brick oven” gives their pizzas a “unique flavor and crisp crust just not possible from gas, convection, or wood burning ovens.” 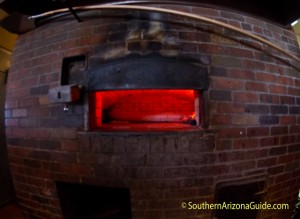 According to Grimaldi’s manager, Jeff, this custom coal-burning pizza oven cost $45,000. Temperatures range from 800 to 1200 degrees.

Clearly other local pizzerias disagree. Rocco’s Little Chicago has an electric conveyor oven. Reilly Craft Pizza & Drink has a gas-fired oven. Bianco Pizzeria has a wood-burning oven. Yet, there are so many other variables that create the tastes of any given pizza, I doubt anyone could tell what kind of oven it was cooked in.

However, what we have discovered as we taste-tested 18 pizzas around town, the temperature of the oven is extremely important. The best pizzas we have tasted so far are all cooked at about 800 degrees for about 4 minutes. The trick is to keep the pizza in the oven for as long as possible without burning the crust, yet not so long that the sauce makes the crust soggy. The longer it’s cooked, the more flavorful it will be so long as the crust isn’t rendered charcoal. Read More

We shared a carafe of pleasantly dry Pinot Grigio. Having devoured 2 pizzas, none of us had any appetite for dessert. Although, I had dined here about 6 months ago and shared an excellent dessert with my dining companion. I understand that Grimaldi’s changes dessert specials once a month. 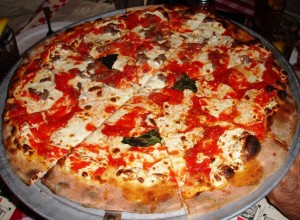 Grimaldi’s specializes in New York-style pizza with large hand-tossed, thin-crust pies, light tomato sauce and fresh mozzarella cheese. The most common topping is pepperoni. In New York City these are often sold in wide slices to-go with a crust that is crisp along its edge, yet soft and pliable enough beneath its toppings to be folded in half to eat while walking to your next audition.

We all thought our Grimaldi’s pizza was very good. Neighbor Roy & I each had a slice of the ladies’ pizza and we both agreed the sun-dried tomatoes elevated pizza to a whole new level of excellence. Yet the fundamental question remained. Was Grimaldi’s the best? Here is how they voted:

(Note: my 95 yo father joined us and enjoyed his Grimaldi’s, but abstained since he had not been to the other places. He has since returned to his home near Portland, Oregon, but plans on returning to Tucson in February, which is his custom.)

This diverse outcome left me no choice but to invite all of the participants to Tavolino’s (Skyline & Campbell) since the other 3 were not with Sue and me a few weeks ago when she and I enjoyed two different pizzas, both outstanding. So, our pizza odyssey continues one more week. After Tavolino’s, I may never eat another pizza.

This is the first time we have two ratings for a single dining experience. Roy’s and my pizza was very good, thus a 4-Saguaro rating. But the ladies’ pizza was a notch better, thus a 4.5-Saguaro rating. We can only elevate Grimaldi’s to 5-Saguaros (Best of the Best) if Tavolino’s disappoints. Stay tuned!