I found out about this book while reading According To Kate which I reviewed earlier this year. 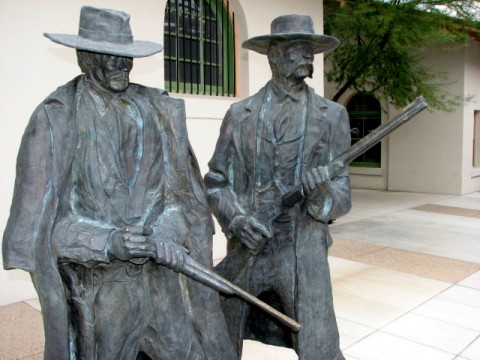 These statues of Wyatt Earp and Doc Holliday are at the Tucson Train Depot near where the body of Frank Stilwell was found.

A third of this book portrays the dentist-turned-gunfighter’s roots in the antebellum South, the effects of the Civil War on his  home and relatives in Georgia, in the years before Doc went West to heal his lungs from the devastating effects of tuberculosis. I found this portion to be insightful as to his upbringing, manners, and technical training as a skilled dentist.

The book continues to reveal his involvement with Wyatt Earp and his brothers and their confrontation with the outlaw Cowboy gang at the Gunfight at the O.K. Corral in Tombstone, Arizona.

It even develops a theory of Doc’s involvement in the killing of Johnny Ringo when he and Wyatt Earp returned to Arizona from the safety of Colorado to hunt the outlaw, even though the official cause of Ringo’s death was suicide. 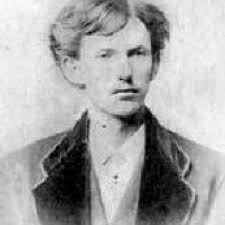 In her Preface, Tanner states, “The mystery that surrounded John Henry Holliday for over one hundred years still prevails. His reputation has gained legendary proportions in the history of the American Southwest and has been the subject of numerous biographies. These efforts have suffered from lack of knowledge, overactive imaginations, or deliberate fabrications.” Tanner attempts to unravel the mystery in part by using heretofore unpublicized family resources.

She also explains that his Georgian Holliday family did not cooperate with inquisitive writers because they were either ashamed of Doc’s conduct in the West or did not believe all the newspaper accounts of his bad behavior given his genteel Southern upbringing.

Tanner also recounts John Henry’s leaving Atlanta as a young man. “In September 1873, John Henry Holliday, D.D.S., of Atlanta, Georgia, boarded the Western and Atlantic train. He was bound for Dallas, Texas, where, it was hoped, the dry climate would cure his consumption and eventually allow him to return. All the family members who had played an important role in his life were gathered at the depot to see him off, with the notable exception of the most important of all, his mother, who had died seven years earlier.”

“Alice’s untimely death came the year after the end of the (Civil) war. John Henry’s devastating loss was magnified when his period of mourning was interrupted by the shameful remarriage of his father and mere three months after his mother’s funeral. The farewell party at the depot did not include Rachel, Major Holliday’s young wife, who was only eight years older than her stepson. The tension between father and son was evident to the entire family. Henry, after awkwardly embracing his son, must have realized that he might never again set eyes on his only son, who suffered from the same debilitating disease that had killed his first wife, Alice.”

John Henry’s uncle, John Holliday, gave him a gold and diamond stickpin as a going-away present. “The diamond was from Dr. Holliday’s private collection. In the years to come, this stickpin served as John Henry’s link to his aristocratic past and the home he would never see again. 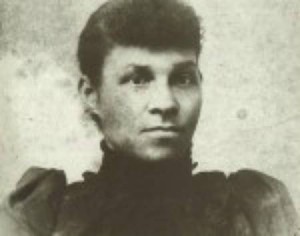 Also at the depot was Sophie Walton, who had come to the Holliday family eight years ago, a frightened little black girl with nowhere to go. The former slave became the family mainstay – servant, seamstress, nanny, source of strength, and, as John Henry knew, an expert at manipulating cards.” (This story about Sophie Walton ability with cards is retold in our book, Southern Arizona’s Extraordinary History, available on request at Southern Arizona Guide.com.)

“John Henry waved his last good-byes. He was wearing his new diamond stickpin as he boarded the train. Perhaps at that moment, some of the family’s thoughts drifted back to the day of his birth in August 1851. They could not have realized that John Henry Holliday, D.D.S., age twenty-two, would soon become legend.”

I found this book to be a good read, full of interesting heretofore unknown facts about the life of Doc Holliday. I highly recommend it to anyone interested in the Old West. you can purchase Doc Holliday: A Family Portrait