Ms. Karen & I are not much for watching television. But we do enjoy many of Tucson’s Nightlife and vibrant performing arts presentations throughout the year.

There’s no lack of things to do in Tucson when it comes to performing arts and theatre, whether plays, music or ballet. Tucson has more than one Film Festival during the year. In Tucson, not all production companies have their own facilities. For example, the Tucson Symphony, which usually performs at Tucson Music Hall, also performs at several different venues, such as Catalina High School (good acoustics), over the course of a season.

Following is a list and brief description of the many venues, performers, orchestras, and production companies that we are certain you will find more than worth the price of a ticket. Season tickets for the upcoming season are available now. For a Calendar of the Arts Events in Tucson and Southern Arizona, see our calendar under ARTS. 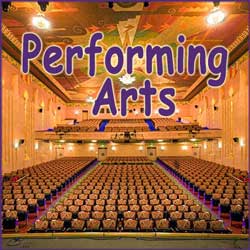 Okay, it is technically not in Tucson but well worth the trip to Ramsey Canyon for an intimate afternoon with your favorite, western folksinger or cowboy music group.

Since 1971, Arizona Opera has produced over 200 fully-staged operas, concerts, and collaborative programs throughout the state of Arizona. It is among a handful of companies in the U.S. that regularly performs in more than one city. The company’s artistic history is rich with a blend of operas traditional repertoire featuring baroque, bel canto, and verismo works, turn-of-the-century masterpieces, operettas, and American operas.

Our State’s professional theater company, sharing its considerable talents between Phoenix and Tucson. Plays and musicals are performed at the historic Temple of Music and Art downtown. There are many places downtown now to dine before or after performances within easy walking distance; many of which we highly recommend. See our list of Downtown Restaurants and Dining Reviews

Arts Express is a Tucson based non-profit producing captivating theatre and concert productions. With performances year-round at various locations, there is something for the whole family to enjoy! With over 30 years of service in Southern Arizona, Arts Express is dedicated to building a better community through the arts! This year’s performances are scheduled at the Berger, Fox Theatre, Crowder Hall and Centennial Hall.

The Berger Performing Arts Center is west of the freeway on the campus of Arizona State Schools for the Deaf & Blind. This is a small, but first-rate venue where you can enjoy everything from a jazz concert to a full-blown musical, such as Les Miserables.
For dining before or after a performance, we suggest Agustin Kitchen located at the Mercado on Congress just 1.4 miles distant.

A professional theater company recognized nationally and internationally for the development and production of theatrical and educational programs that reflect the diverse voices of the U.S./ Mexico border region. Generally, these “voices” are Chicano or Latino and many of the performances are presented in English/Spanish as suits the themes and audiences. Expect heavy doses of angst and pathos.
All Borderland Theater performances are at the ZUZI’s Theater 738 5th Avenue, a dreary old place in serious need of renovation.

The Tucson Boy’s Chorus was established in 1939. Operating at several venues throughout the year, they are a Tucson hallmark. Christmas at San Xavier is remarkable if you can get tickets.

Now showing solely on campus at Centennial Hall for 2015-16. Broadway in Tucson brings Broadway to you. Beauty & The Beast; Flashdance; Guys & Dolls; and many of Broadway’s other most popular shows.

Spend a magical night at the Carnival of Illusion. Intimate shows full of clever illusions, mind games, and mystery. See our Review then book a performance.

Large amphitheater for sports and concerts and lounge for smaller acts. Top-rated hotel.

La Cocina shares the courtyard with the shops at Artisan Studios. There are often music, performers, and other events shared with downtown Tucson.

The Civic Orchestra of Tucson is a 60-piece volunteer community orchestra presenting concerts to residents of Tucson and Southern Arizona.

The Desert Diamond Casino in Sahuarita off I-19 brings in some desirable acts as well as lounge shows, good food and gaming.

Plays, musicals and concerts since 1977, in an intimate setting serving food and beverages. Located on the far east side of Broadway. Both a production company and a venue they have been in business for over 35 years.

In Oro Valley another venue from the people who bring you the Gaslight Theatre. Fun for the whole family.

There’s always something afoot at the Hotel Congress. A downtown hot spot.

“Contemporary, folk and world music.” Performs at several venues. Learn more about them here and find a concert that interests you.

Non-profit dedicated to producing quality theatre and arts education experiences for all facets of the community in an intimate setting that showcases local professional talent and guest artists.

Thursday – Saturday nights. A little late for us. Let us know what you think. Contact us.

Their motto is to “provide performance and education to entertain, enlighten and uplift our community and to develop theatrical talent.” Two Theatres: Main Stage and All Together Family Theatre.

A Non-profit theater dedicated to exceptional films and the art of film.

New Artisan shops, food, and music on the Miracle Mile. Check it out.

This nonprofit hosts a wide variety of musical performers, comedians, and more. Usually a younger crowd.

The Rogue Theatre has its own venue. Its mission is to create the highest quality theatre possible. Big words. Check it out.

Sea of Glass Center for the Arts

A young venue delivering music, film, and art that will change the way you think. The Sea of Glass hosts groundbreaking and award-winning documentaries as well as alternative music and earth responsible food.

The venue for such theatre productions as the Winding Road Theatre Ensemble and the Arizona Theatre Company.

I don’t know how I missed this all these years. Celebrating their music in churches and other community venues in Neighborhoods throughout Southern Arizona, they are a choir and orchestra. Innovative performances. Inexpensive season tickets.

They bring classical music to your neighborhood. Performances are held mostly in churches.

The Tucson Convention Center consists of an Arena for Sports events, two theaters; the Leo Rich Theatre and Tucson Music Hall where the symphony plays and an Exhibition Center.

A Nonprofit organization dedicated to keeping ballet accessible and affordable. Venues include the Leo Rich Theatre and Music Hall. Focusing on Ballet for Youth.

Tucson Symphony Orchestra and special guests have a full and varied agenda for 2014. Concerts are generally located at the Tucson Music Hall downtown or the Catalina Foothills High School, a surprisingly solid venue.

(Centennial Hall) Ballet, Concerts, Broadway plays, and Musicals, UA Presents brings in talent from all over the world.

During the normal school year, you can find wonderful recitals, free and almost free here.

Part of the University of Arizona’s School of Theatre, Film &Television, you will find some of the best talents in the country. Don’t miss these events. These guys are good.
From time to time we will feature some upcoming and ongoing Performing Arts events we think are worthwhile.

If we missed a venue or production company, please let us know by contacting us here.