(Reproduced with the permission of the Bisbee Mining & Historical Museum.) 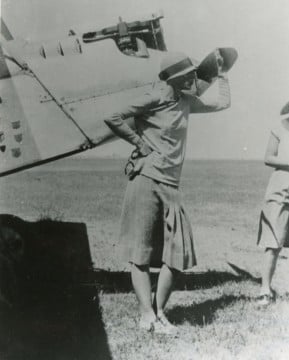 A year earlier in 1927, the year Babe Ruth hit a staggering 60 home runs, Charles (Lucky Lindy) Lindbergh had made the first cross-Atlantic solo flight. Suddenly the whole world was abuzz over the possibilities of aviation transportation … the kind we take for granted today. By this time, Ms. Earhart owned the world altitude record for a woman (14,000′). She was Cosmopolitan Magazine’s associate editor for aviation, and had authored a book & several major magazine articles on aviation. She even had her own successful line of clothing.

On September 12, 1928, Ms. Earhart was on a solo flight across Southern Arizona when her plane ran low on fuel. Below her, was the only landing field for miles around … the lone dirt runway at the farming & ranching community of McNeal, about 25 miles NE of Bisbee. Her landing was not uneventful. Mesquite tree needles punctured her tires. But at least she was on the ground & safe. 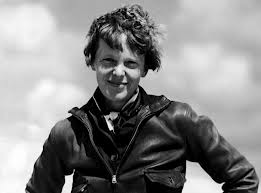 They may have been hardscrabble farmers & ranchers, but the men of McNeal were also gentlemen. They offered to make the repairs to Ms. Earhart’s airplane while she had dinner with the members of the Ladies Aid Society.

For the town folks of tiny McNeal, this was a very big deal and the minutes of the meeting/dinner reflect their joy on this occasion.

The minutes also note that Ms. Earhart donated $1.00 to the organization.

It was rumored that, once the repairs were made to her aircraft, she used one of her silk stockings to filter the gas for her plane. Even today, area residents fondly talk about the day the world-famous aviatrix dropped in to McNeal.

Four years later, in 1932, Amelia Earhart would become the first woman to fly solo non-stop across the Atlantic. This history-making flight lasted nearly 15 hours through very rough weather & mechanical problems. She finally touched down in a pasture in Northern Ireland. A very surprised farm hand asked her, “Have you flown far?” Her reply: “From America.” Can you imagine the consternation? 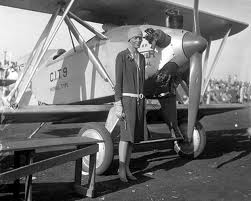 After such a remarkable accomplishment, Ms. Earhart was awarded the Distinguished Flying Cross from the U.S. Congress, The Cross of Knight of the Legion of Honor from the French government, and the Gold Medal of the National Geographic Society presented to her by the President of the United States, Herbert Hoover.

In 1937, Ms. Earhart attempted to become the first woman to pilot an airplane around the world. She never made it. She, along with navigator, Fred Noonan, was lost at sea somewhere in the Pacific near Howland Island. She was only 39 years old.

Do you want to learn more about the history of Bisbee and Cochise County? Visit the Bisbee Mining & Historical Museum‘s Website.