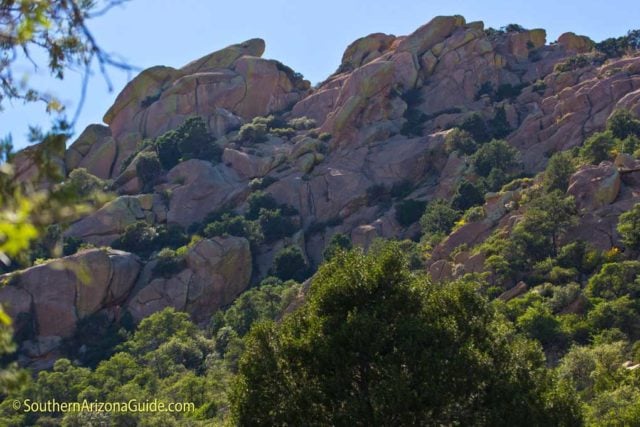 Stronghold: A place fortified against attack. Such a place is Cochise Stronghold, a series of natural rock formations that the Chiricahua Apaches used to hide from the U.S. Army and the growing number of Arizona settlers.

At the base of the Stronghold rocks is a campground. This is where we headed on a Sunday afternoon one late September day: Ms. Patti, Ms. Rosemary, Ms. Karen and I.

I had been there years before and didn’t like the campground because it was buggy. Water pooled in nearby stream beds and served as a breeding surface for mosquitos.

On this trip, we crossed several dry stream beds on the way to the campground and, consequently, there were no mosquitos. Only the occasional fly. Our purpose was to have a picnic, check out the campsites and hike the trails that lead off into the hills above.

Getting there was also an adventure. We took the Dragoon cutoff at Texas Canyon to Highway 191, passed the Amerind Museum and came across Golden Rule Vineyards. It was just past 11 AM and their sign said “Open 11 AM to 5 PM.”

Since Ms. Rosemary and Ms. Patty had not been there, we hit the brakes, turned in and drove down the dirt road to the tasting room. There we were greeted by owner Jim and his wife, Ruth, a charming couple. We sampled 7 bottles of their finest wines and each purchased two, none of them the same, as our tastes in wine were decidedly different. Golden Rule specializes in Reds. IF you go, ask them about their BlackListed Wine.

Then it was off to Sunsites where we picked up Ironwood Road that headed west into the Stronghold. After 3 miles the road turns to dirt, but does not require a high clearance vehicle. 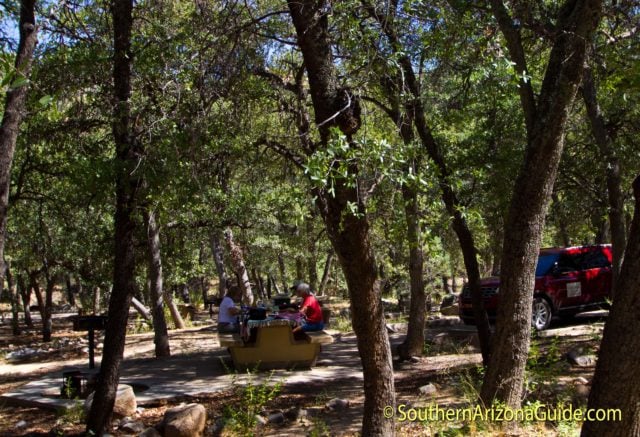 Each campsite, 11 individual and 2 group, had a picnic table and a BBQ stand. We had a difficult time finding where one might pitch a tent at this particular one. The sites are beautifully wooded, but in close proximity to each other. The campground is open from September through May. They do not take reservations, there is a composting, handicap accessible toilet, and no potable water. BYOW. Trailers up to 16 ft are allowed. For more information visit Coronado National Forest.gov. 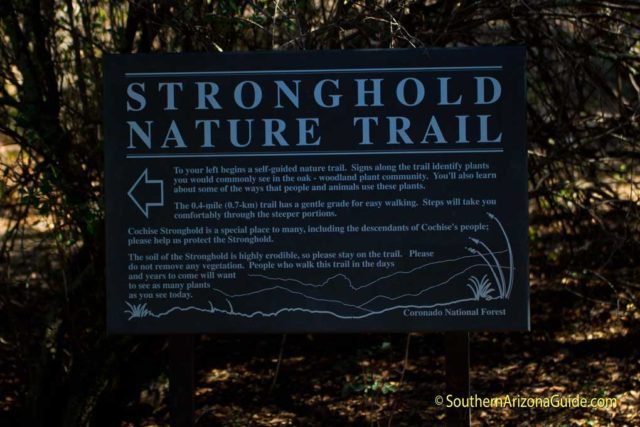 Now it was time for a walk. We started with the Interpretive Trail. A short paved trail, handicap accessible, it was populated with signs that explained the history and geography of the area. They told about the warrior chief Cochise, his blood brother Tom Jeffords and the peace they secured with General Howard and the U.S. Army. And about Cochise’s death and burial in a place unknown to any white man except Jeffords. 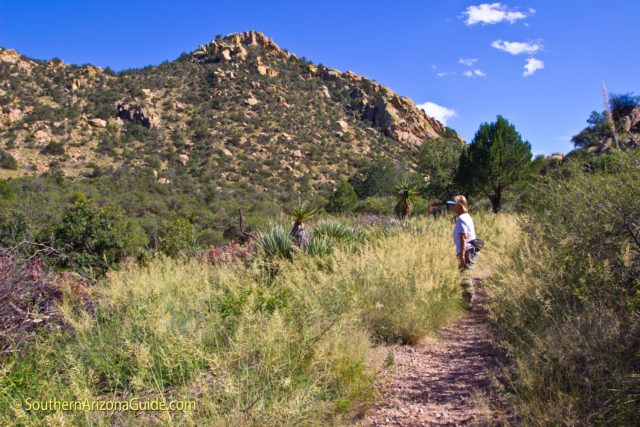 Next, Ms. Rosemary and I, Ms. Karen took on the Nature Trail. Jim and Ms. Patty headed back to the picnic area. The Nature Trail heads up some steps and winds around for about a 1/2 mile, with signs about the flora dotted about.

Now it was about 3 pm. We had wanted to get to Half Moon Tank which is 2.4 miles up Cochise Trail, halfway to the summit before it heads down to the Westside of the Stronghold. The westside of Cochise Stronghold is where Council Rocks is, where Cochise signed the treaty of surrender.

This being September the weather was still warm. We made it to a sign indicating that we were not even close to our goal. It was getting late and I, Ms. Karen had a dog to feed. We packed up and headed home. A good day was had by all.