↓
Home→a Newsletter→What Does Cochineal Scale Have To Do With The Color Red? 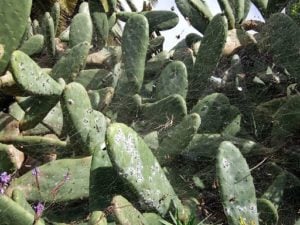 We were at the Presidio San Agustin del Tucson a while  back with friends, introducing them to the history of Tucson in a nutshell. "Living History Days" was over for the summer, but we did meet up with Kathe, a volunteer who gave us an in depth demonstration of the importance of cochineal scale. It was surprisingly fascinating stuff.

I have lived in Tucson for more than a dozen years, and was familiar with cochineal scale, but only that it killed the prickly pear cactus, aka Nopal, and how to wash it off. I had assumed that it was a fungus.

From her demonstration, I learned that it was the primary source of the color red in the days of Spanish occupation and is still used today. Kathe told us several stories of the search for and propagation efforts of the Spanish to achieve the color red.

Red is a particularly difficult color to come by. Now the kicker. Believe it or not, it is the cochineal bug that is the source of this color (almost purple) and it is the bug that produces this scale. The cochineal bug produces an acid called carminic acid. It is so small that it was not certain that it was an insect until the age of the microscope.

It is, In fact still used in some of the foods that we eat. Here is a partial list of possibilities: frozen meats and fish, soft drinks, fruit drinks, energy drinks, yogurts, ice cream and dairy-based drinks, candy, syrups, ketchup, popsicles, fillings, and chewing gum. Grossed out?  It is not unusual that bugs are in our food. The FDA allows a small amount of bugs in almost everything that we eat.

Dyeing fabric from the juices of the cochineal bug is fairly tedious. First you have to remove all that fuzzy scale from around the bug. Then, of course, squish it. Here is a short article on the production and dyeing of materials in Oaxaca, Mexico. It is from the author of the book: 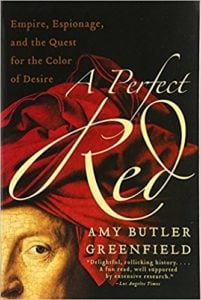 A Perfect Red: Empire, Espionage, and the Quest for the Color of Desire

More on this after I read the book. You can purchase it at the Presidio San Agustin del Tucson or on Amazon.com. A Perfect Red: Empire, Espionage, and the Quest for the Color of Desire